We’re forever on the lookout at the Carbon Tax Center for new and outsized ways in which Americans are using energy. Too often, today’s novelty item is just a clever marketing campaign away from tomorrow’s sizeable carbon emitter. Witness high-definition televisions, or Jet Skis.

If history is a guide, efficiency standards to govern new devices’ fuel consumption won’t be promulgated until after they have proliferated — if ever. Carbon taxes, in contrast, could help rein in new products’ energy requirements from the git-go, i.e., in the design stage. Where a product has little redeeming social value, the price signals from a carbon tax might even keep it from gaining a toehold in the culture. 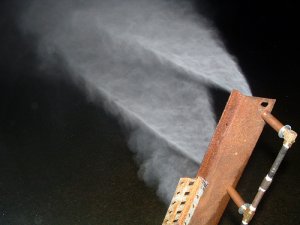 These thoughts came to mind when we read an article in The New York Times last week about suburbia’s latest must-have energy-guzzlers: home snowmaking machines.

“Since Nature can no longer keep to her early deadlines,” The Times reminded us in a veiled nod to climate change, dads from Darien to Denver “are taking matters into their own hands, and creating their own seasons, at least when it comes to winter.”

They’re doing it with snowmakers — machines named “Backyard Blizzard” and “Snow at Home” that feed on water and run on electricity, lots of it. According to the manufacturer, the Blizzard Sport model uses 2 kilowatts. The Times article gave a lower figure — which didn’t appear until the nineteenth paragraph and came with the curious note that “a clothes dryer guzzles more power.”

Of course, most clothes dryers aren’t left on for two days straight. That’s how long a snow-loving Greenwich, CT developer profiled in The Times story had been running his two snowmakers when the reporter dropped by.

Another two-machine man, owner of a boat repair business owner near Atlantic City, NJ, made this admission: “My neighbors are going to work at the casinos at 3 a.m. and I’m out there, too, messing with the guns. It’s really hard to turn the guns off.”

Hmm, what did Miles Davis tell Coltrane when the saxophonist said he sometimes didn’t know how to end a solo? “John, just take the horn out of your mouth.” In this case, given the large helpings of fossil fuels that go into powering snowmakers, a carbon tax might provide a strong incentive to users to turn them off, or to refrain from buying them in the first place.

We calculate that using two snowmakers — one evidently isn’t enough — twice a month, for two days straight, over four months of the year consumes around 3,000 kWh — enough to pump out 1,220 pounds of CO2, based on the national average mix of fuels used in making electricity. On that average, the $370/ton carbon tax that CTC proposes (after a 10-year phase-in) would add
$225 a year in operating costs.

Based on the high price-elasticities for many luxury goods, the tax might be expected to reduce sales of home snowmakers by around a third. That’s a nice hit, though admittedly it’s far from the 75% market shrinkage that is probably needed to strangle the snowmaker industry in its cradle. (Achieving that through a tax disincentive alone would require a carbon tax five times larger than the one CTC is seeking.)

Which suggests that by itself a carbon tax won’t determine the outcome every time. But it would nudge some of us away from making certain climate-damaging choices. And at least the polluter — whether it’s a giant factory or, as in this case, dear old snowmaker dad — would be made to pay.