On December 10, 2015, a day before the close of the UN climate summit in Paris, Senator (and presidential candidate) Bernie Sanders introduced the “Climate Protection and Justice Act.” His bill would impose a charge of $15 per metric ton (“tonne”) of CO2 emitted from fossil fuel combustion, with the fee taking effect in 2017. It would then rise at an average annual rate of $3.22/tonne, reaching $73 by 2035. At that point the tax trajectory would change to a percentage basis, growing by 5% annually until attaining a level of $150/tonne in 2050. Proceeds from Sanders’ proposed carbon tax would be returned to households making less than $100,000/year, a rebate of roughly $900 in 2017, rising to $1,900 in 2030. Revenue would also fund investments in energy efficiency and low-carbon energy.

Sanders’ press release claims his measure would reduce U.S. CO2 emissions to 80% below 1990 levels by 2050. The results of seven major integrated assessment models reported by the Stanford Energy Modeling Forum suggest that a more aggressive carbon price trajectory, rising to roughly $440/ton, would be needed to accomplish this ambitious 80% reduction target by 2050, in the absence of major technological breakthroughs. Nevertheless, model results become increasingly murky as time horizons grow more distant. In any event, Senator Sanders is the first (and, as of January 2016, the sole) candidate in the 2016 presidential race to endorse an explicit and rising tax on carbon pollution.

On April 22, 2015, Earth Day, Rep. John Delaney introduced a discussion draft of his “Tax Pollution, Not Profits Act” that would establish a tax $30 per metric ton of carbon dioxide or carbon dioxide equivalent, increasing each subsequent year at 4% above inflation. Delaney’s proposal would apply revenues to reduce the corporate tax rate to 28%, provide monthly payments to low-income and middle-class households and fund job training, early retirement and health care benefits to coal workers. At an Earth Day AEI event discussing his bill, Rep. Delaney took the bold step of suggesting his proposal for a simple economy-wide carbon tax could replace the EPA Clean Power Plan.

On November 19, 2014, Sen. Sheldon Whitehouse (D-RI), renowned for his weekly “Time To Wake Up” speeches on the Senate floor, introduced the “American Opportunity Carbon Fee Act.” This bill would impose fees on both CO2 and non-CO2 greenhouse gases, including fugitive methane from shale gas wells and coal mines, at their CO2-equivalent rates. AOCFA includes a border tax adjustment to impose equivalent climate pollution fees on imported goods from nations that have not enacted their own.

AOCFA pegs its pollution fee to U.S. EPA’s estimate of the “social cost of carbon” currently, $42/ton CO2, and would rise by only 2% annually in real terms. The Carbon Tax Center’s 7-sector price-elasticity spreadsheet model projects that the proposed starting price of $42 per ton of CO2 would quickly reduce US emissions by about 15%. But the bill’s subsequent 2% annual real price increases would barely stem the rising emission tide due to increased affluence, resulting in essentially flat emissions rather than a declining curve.

On May 28, 2014, Rep. McDermott (D-WA) introduced H.R. 4754, a direct and transparent measure to phase out free dumping of climate pollution into our atmosphere. The 21-page bill would steadily raise the cost of climate pollution, enabling investments in renewable energy and efficiency to compete effectively with continued extraction and burning of dirty fossil fuels.

McDermott’s pollution tax would start modestly at $12.50/tonne (metric ton) of CO2 and rise annually by the same amount ($12.50/tonne), reaching $125/tonne CO2 within a decade. The result, according to CTC’s carbon tax spreadsheet model, would be a one-third reduction in U.S. carbon pollution in the tax’s tenth year, vis-a-vis actual U.S. emissions in 2005. By 2030, the target year for the heralded new EPA-White House Clean Power Plan, the McDermott pollution tax would be reducing U.S. CO2 emissions by an estimated 2,051 million metric tons per year, or nearly 6 times the 355 million tonne reduction we have estimated for that year from the Clean Power Plan. 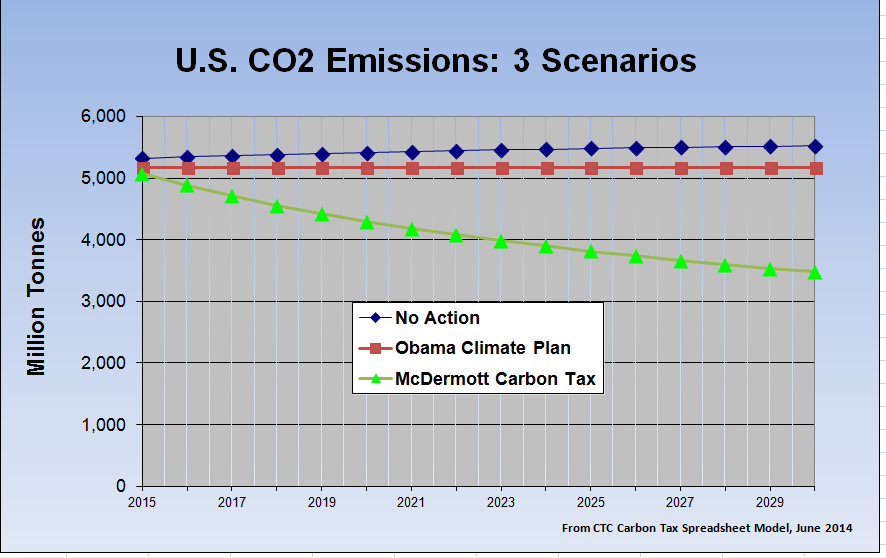 Obviously, a carbon tax like that in the McDermott bill requires an act of Congress — a far more difficult process (though administratively simpler) than the EPA plan. Nevertheless, the nearly 6-fold difference between their respective CO2 reductions is instructive, illustrating both the narrow scope of the EPA plan and the vast reach of carbon taxing.

On February 14, 2013, Senators Bernie Sanders (I-VT) and Barbara Boxer (D-CA) introduced the Climate Protection Act. Sanders-Boxer would  impose an economy-wide tax on CO2 pollution, starting at $20/T CO2 and rising over a decade to $33/T CO2. We estimate that this price signal and trajectory would induce a 12% reduction in CO2 emissions over the course of a decade. The measure includes border tax adjustments to protect domestic industry and encourage other nations to enact their own carbon taxes. Sen. Sanders posted a rousing op-ed in the Huffington Post in July 2014 in support of his and Sen. Boxer’s bill.

The Progressive “Back to Work” Budget

ACESA included a cap-and-trade title, including 2 billion tons of offsets (up to 75% international) effectively delaying domestic U.S. emissions reductions by at least a decade. The bill would have given away 85% of allowances, auctioning only 15%. (Grist summary here.)

While retaining a “cap” and limited trading, CLEAR would avoid the most profound flaws of the Waxman-Markey bill (passed by the House) and the Kerry-Boxer bill (which stalled in the Senate).  CLEAR would set a floor and ceiling (“collar”) on carbon allowance prices, authorize only “covered entities” to hold allowances and would not allow offsets to be used in place of allowances.  CLEAR proposed to “recycle” 75% of revenue directly to households, contrasting sharply with the cap-and-trade bills’ give-away of carbon revenue and its equivalent in free allowances to an array of special interests and energy projects.  With Sen. Susan Collins’ (R-ME) co-sponsorship, CLEAR began as a bipartisan proposal.

CLEAR purported to preclude a secondary market (or “derivatives”) in carbon allowances.  But analysts raised doubts about whether the bill could prevent large energy users  from contracting to hedge against seasonal and cyclical price swings. Also, the low price range of bill — $7 to $21 per ton of CO2 in the initial year, 2012, rising each year at approximately 6% above inflation — is not nearly sufficient to achieve the needed emissions reductions. CTC’s Carbon Tax Model suggests that this price trajectory would only lead to a 7.5% drop in U.S. CO2 emissions from 2005 levels in 2020. Instead of a substantial price signal, the bill relied heavily on subsidies for clean-energy investment which would come from the 25% of revenue not returned to households.  CLEAR’s goal was emissions reductions of 20% from a 2005 baseline by 2020. CLEAR’s price collar would have made carbon prices more predictable, closer to a carbon tax than other cap-and-trade proposals. But its $7 – 21 range was wide enough to allow significant volatility that could discourage investment in alternatives and efficiency while generating profits for speculators. Potential volatility combined with CLEAR’s low price meant that its price signal would be “noisy” and small — not the clear upwardly trending price signal that would most strongly encourage low-carbon energy.

Finally, a volatile price would have made linkage to international carbon markets (or carbon taxes) needlessly complex or even impossible.