Note: This post has been updated from its original March 1 posting: new closing section, some “line edits,” new headline.

That was quite a feel-good story in Yale Environment 360 last week. The headline, On U.S. East Coast, Has Offshore Wind’s Moment Finally Arrived?, didn’t really rate a question mark, considering how the subhead brimmed with optimism:

After years of false starts, offshore wind is poised to take off along the East Coast. Commitments by states to purchase renewable power, support from the Biden administration, and billions in new investment are all contributing to the emergence of this fledgling industry.

About time. Early this century, I was an ardent proselytizer for wind power, “the only non-polluting means of generating energy that is commercially available on a large scale,” as I described it in an Appeal to the environmental community to support the Cape Wind project in Nantucket Sound in 2002. 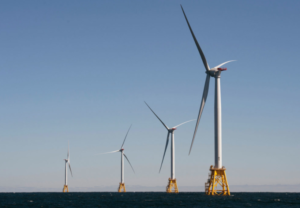 Sadly, in one of the worst NIMBY flameouts ever, the 470-megawatt Cape Wind project was set upon by well-connected Cape Codders like the Kennedy family and Walter Cronkite, keeping it from fruition. and creating a playbook for wind foes everywhere. Even a proposal to repurpose a mine-damaged Adirondacks mountaintop with a mere half-dozen turbines proved no match for preservationists who prioritized their views over sustainability.

But wind power’s political travails did help kindle my interest in carbon taxing. “If carbon fuels were taxed for their damage to the climate,” I mused in a 2006 article in Orion magazine, “wind power’s profit margins would widen, and surrounding communities could extract bigger tax revenues from wind farms,” helping ease the path to public acceptance and regulatory approvals. A few months after writing that, I co-founded CTC.

Today, though fewer than ten wind turbines operate at just two offshore U.S. sites, tens of thousands of onshore turbines together are generating 8 percent of U.S. electricity (based on preliminary 2020 data). Percentage-wise, Iowa led all states with 42 percent of its electricity production coming from wind in 2019. Texas (yes, Texas) led in absolute megawatt-hours from wind last year with a whopping 93 million megawatt-hours, nearly 28 percent of the U.S. total.

Now, the Yale story reports, “New York, New Jersey, Virginia, Massachusetts, Connecticut, Rhode Island, and Maryland have together committed, through legislation or executive action, to buying about 30,000 megawatts (MW) of offshore electricity by 2035.”

A quarter of those megawatts, 7,500, would be located off New Jersey’s Atlantic coast, a goal that NJ Gov. Phil Murphy affirmed in a statement last September announcing the state’s Offshore Wind Strategic Plan.

What physical scale do those 7,500 megawatts constitute? Let’s use as our metric the new crop of super-giant turbines. According to the Yale story, Vestas, Orsted and General Electric are today selling wind machines in the 12-14 megawatt range — an impressive notion, considering that not long ago the 3.6-megawatt Cape Wind turbines were said to be pushing the envelope.

These machines, which the manufacturers are selling today, are truly massive, with towers extending 850 feet above the ocean’s surface, and 350-foot-long blades.

Let’s stipulate 12.5 megawatts, since 80 of them conveniently multiply to 1,000 MW. Meeting NJ Gov. Murphy’s 7,500 MW target would then entail erecting 600 of these super-giants off the state’s roughly 115-mile-long Atlantic coast.

If 600 huge windmills seem daunting, try multiplying the number by five. Yes, 3,000 mammoth turbines providing 37,000 MW from offshore wind is what could be required if New Jersey goes all-in for decarbonization over the next several decades, according to one energy vision that is a kind of apotheosis of the Green New Deal.

That vision is the all-renewables 100% wind-water-sunlight (“100% WWS”) conception propounded by Stanford physicist-engineer Mark Jacobson and colleagues, under the aegis of an NGO known as the Solutions Project.

The idea is for electricity to power all energy uses — not just lights and appliances and electronics but also cars, trucks, heat and industry. Even, eventually, aircraft, either through batteries or, more likely, hydrogen fuel manufactured by electrolyzing water. Electricity is both an efficient energy form for delivering “energy services” and the easiest to provide from all-zero-carbon sources: wind turbines, solar panels and other sunlight-based generation, and water power from rivers or tides.

The Jacobson et al. vision has been written about widely (here’s Jacobson’s 2014 TED talk; also see link to pdf paper at the end of this paragraph) and need not be rehashed here. We use it here as a benchmark. References are to the detailed 2015 paper by Mark Z. Jacobson et al., “100% clean and renewable wind, water, and sunlight (WWS) all-sector energy roadmaps for the 50 United States,” Energy Environ. Sci., 2015, 8, 2093 (14 MB pdf).

By The Numbers: New Jersey Offshore Wind in an All-Renewables Scenario (without a Carbon Tax)

Can this be done? Can New Jersey install (or, more precisely, organize and govern the installation of) 3,000 giant offshore wind turbines?

When we posted this blog on March 1, we promised to estimate how much a robust carbon tax could trim the need for New Jersey offshore wind by trimming energy demand.

At the end of the first decade of a U.S. carbon tax starting at $15 per ton and rising annually at that rate, an estimated 37% of CO2 reductions would be from reduced demand/usage. The remaining 63% would come from decarbonizing electricity and fuels. Source: CTC carbon tax model.

We’ve now (March 12) done the calculation: it appears that a carbon tax starting at $15 per ton of CO2 and incrementing annually (and indefinitely) by that amount would achieve roughly five-eighths (63%) of its carbon reductions through fuel-switching, i.e., by swapping out fossil fuels in favor of renewables — wind turbines, solar panels, etc. The other three-eighths (37%) of the carbon reductions would come from reducing energy demand as a result of energy being made more expensive relative to other goods and services.

The latter figure — the 35 to 40 percent reduction — means that New Jerseyans could achieve 100% wind-water-sunlight energy provision with 35-40 percent cuts across the board in the amounts of wind, solar and water power that the Jacobson scenario would otherwise entail. The requirement to build 3,000 giant offshore wind turbines would become “just” 1,800 to 1,900.

April 10 postscript: What do we mean by “monster” wind turbines?

Friend of CTC Peter Jacobsen (no relation to Mark Jacobson; different spelling, in fact) tipped us off yesterday to the size matchup between what the New York Times recently called GE’s new “monster” wind turbines and the smokestacks of what was the largest U.S. coal-fired power plant until its closure in 2019 and demolition last year, the Navajo Generating Station in northern Arizona, near Lake Powell. 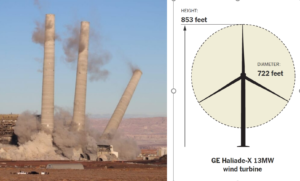 Some folks view giant smokestacks and giant turbines as pretty much the same. Two decades ago, a newspaper story about a proposed wind farm outside Cooperstown, NY, near the Finger Lakes, closed with a quote from a Manhattan television executive who was retiring to a hilltop home in the area: “I think the towers would make my property worthless,” he said. “To see these giant towers near your house — it would be like driving through oil derricks to get to your front door.”

A few years later, I toured a nearby wind farm while researching an essay on wind power for Orion magazine. “To my eye,” I wrote, “the wind turbines were anti-derricks, oil rigs running in reverse. The windmills I saw in upstate New York signified, for me, not just displacement of destructive fossil fuels, but acceptance of the conditions of inhabiting the Earth.”