Protecting “a desert in the mountains”

Though I’ve hiked all over the west, I’ve never been to Nevada’s northwest corner. On the map it’s a broad, empty strip from I-80 to the Oregon line. For hundreds of miles, it is in fact wild country — and far from empty, biologically, ecologically. 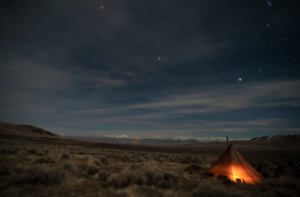 The encampment. All Thacker Pass photos are from  www.protectthackerpass.org, used by permission.

In January, a pair of activists, Will Falk and Max Wilbert, pitched a tent in one of the loveliest valleys of the region, seeking to rally resistance to a proposed lithium mine on public land. The place where they’ve established their protest camp is called Thacker Pass.

Lithium is a metal, and its physical and chemical properties make it versatile enough to be baked into lubricants, ceramics and other useful stuff, including batteries. Lithium-ion batteries, invented in the late 1970s and prized for their energy density and rechargeability, are integral to two pillars of the Green New Deal: electric vehicles and power storage.

Falk and Wilbert, camped out in midwinter cold, enduring what is no doubt some small privation, are asking that we recognize the ecological and environmental cost of the so-called sustainable economy, at the center of which is the mining of lithium. We need to understand why they are taking a stand at Thacker Pass.

Here’s how they describe where they are right now:

Thacker Pass is a physical feature in Humboldt County, Nevada, part of the McDermott Caldera approximately 60 miles northwest of Winnemucca. It was formed 16 or more million years ago, is traditional and unceded territory of the Paiute Nation, and is United States Bureau of Land Management public land.

Now it is also the proposed site for a massive lithium mine that would destroy the area and valuable habitat for the creatures who live there.

A Less Than Green New Deal?

Climate campaigners have decreed that the world’s cars and trucks must switch to electricity — an imperative that was boosted by General Motors’ recent announcement that it intends to sell only electrics after 2035. Climate hawks say biodiesel can’t be done at scale and hydrogen vehicles are years from commercial use, and they’re right, not when American households and businesses own 275 million cars and trucks and drive them over 3 trillion miles each year — making “ground transportation” the country’s biggest source of planet-heating carbon dioxide emissions.

Key to the green idea for transportation is to make wind and solar power so plentiful that the electric grid will no longer need generators running on fossil fuels. Electric vehicle battery re-charging — and driving — will then be emission-free and climate-pure.

Of course, a renewables-based grid is subject to fluctuating output from the wind farms and solar arrays. That’s where lithium’s other GND connection comes in: powering massive rechargeable battery stacks that can feed electricity into the grid for hours at a time, continuously stabilizing electricity supply.

Already, giant assemblages of lithium-ion batteries are sprouting up in California, where renewable energy has penetrated furthest, enabling utilities in the state to close some turbines burning fracked methane.

The Green New Deal, the anointed framework for perpetuating industrial civilization as we know it while creating jobs and a “just transition” from the fossil-fuel economy, is clearly better than our carbon-based catastrophic course. It also depends on massive amounts of lithium.

I figure that electrifying all U.S. cars and trucks in two decades, as envisioned in GND scenarios, will demand the continuous lithium output of three to five Thacker Pass mines. (See sidebar.)

Powering “utility-side” grid-smoothing batteries will require still more. How much, I do not know. An extensive literature search turned up not a single statement of the quantity of lithium needed per gigawatt-hour, say, of electricity storage — an indication, perhaps, of the alienation of Green New Dealers and energy scenario-spinners alike from the physical implications of their intentions.

One reason for Falk and Wilbert’s stand is obvious: the lithium mine at Thacker Pass will destroy an entire sagebrush ecosystem. Mind you, what’s planned at Thacker Pass isn’t just an epic-sized mine. There will also be an enormous complex to extract lithium from the mined ore for its conversion into a non-volatile carbonate form to be made into batteries.

Because lithium’s concentration in ore at Thacker Pass runs as low as two-tenths of one percent, producing one ton of the stuff for use by society entails strip mining and processing as much as 500 tons 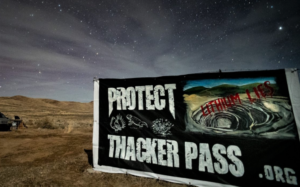 of earth. Over a single year, producing 60,000 tons of lithium at the site could mean digging up as much as 20 to 30 million tons of earth, more than the annual amount of earth dug up to produce all coal output of all but seven or eight U.S. states.

Removing the lithium from the ore is done with the industrial economy’s dissolver of choice, the notoriously corrosive and toxic sulfuric acid. The developer, Canada-based, China-backed Lithium Americas Corp., plans to acidify molten sulfur on site, trucking in the stuff from oil refineries. Hauling the material will require 75 tractor-trailer loads a day, according to Falk and Wilbert — every one of them running on fossil fuels.

Unsurprisingly, the processing equipment is budgeted at a dozen times more than the mine itself, in Lithium Americas’ “pre-feasibility study” (pdf, p. 228 of 266), with the whole enterprise topping out at more than a billion dollars. You don’t spend that much money on apparatus to move, crush, leach and acidify earth without scarring and contaminating large swaths of it.

Thus, the “Protect Thacker Pass” banner. There’s a lot to protect. On the encampment’s web site, Falk and Wilbert describe Thacker Pass as “a stunningly biodiverse, wild, expansive, and beautiful desert in the mountains.” In mid-winter, they attest that the land practically vibrates with stars and stillness.

The pair’s real aim at Thacker Pass is to question a Green New Deal that is dependent on large-scale resource extraction and industrial manufacture. Which means questioning not just society’s but the environmental movement’s acquiescence to consumerism and material growth.

Where is it written, they ask, that Americans must own 275 million vehicles? Where is it written that we can’t halve that number, to Western European levels, with denser suburbs and Euro-quality transit along with broad cultural changes substituting place and proximity for pointless travel, thus slashing the “need” to replace all those cars and trucks with electric vehicles built from mined lithium? As for grid storage, rate incentives that harmonize electricity usage with its real-time availability could partially supplant batteries. Smaller homes and less air-conditioning of buildings could also trim power demand, period.

Tightening the Regulatory Screws Would Help

Would it also make a difference if the pollution discharges permitted at Thacker Pass and at other lithium mines were cut ten-fold? I believe so. This wouldn’t just reduce ecological degradation in the immediate areas. The cost to comply with those regs would boost the price of lithium carbonate. The responses to the higher price — ranging from lighter vehicles that can get by with smaller battery packs to potentially more-efficient (hence, less-resource-intensive) energy storage media — would cut demand. 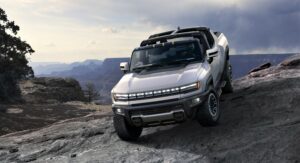 GM’s Hummer EV: bullshit on our streets, bullshit in our wild lands.

The U.S. has already witnessed just such a chain of events: with coal-fired power plants. To satisfy regulatory mandates to cut new plants’ soot emissions and acid gases roughly ten-fold, utilities were forced in the 1970s and 1980s to spend billions for scrubbers, precipitators and the like, driving up prices of new coal-fired plants — a progression I documented at the time. Coupled with even more meteoric cost escalation at nuclear power plants, the result was spiraling electric rates that helped spark the revolution in energy efficiency that has all but extinguished growth in electricity demand in the United States.

There, in a nutshell, is the logic behind carbon taxing: to raise prices of fossil fuels in accordance with their true costs, thus spurring reductions in their use. Lithium, no less than coal, oil and methane, should be forced to adhere to the same dynamic. If electric vehicles and carbon-free grids are rendered more expensive for awhile, so be it.

Industrial civilization is still destroying ecosystems, laying waste to biodiversity, ramping up its plunder of forests, consuming more metals than ever, depleting ocean life at ever-increasing rates…and on and on… One antidote is for prices to speak the truth about underlying costs.

Nevertheless, even my regulatory-based scenario has a weak link: global commerce. Make it cost more to mine lithium in the USA, and global capital will alight elsewhere. Lithium Americas already operates a mine in Argentina, and the mineral is widely distributed around the world.

To evade the Whac-a-mole trap, the fight that Falk and Wilbert are mounting in Nevada has to be waged as well in Argentina, Australia and especially Chile, the world’s biggest current provider. It’s a tall order.

First, though, they have to stop the mine where they’re camped, at Thacker Pass. That’s a tall order too. That lithium is a midwife to a low-carbon economy makes it less ugly than coal and less evil than oil. But all the same, it’s a force that is industrializing the entire planet, to Earth’s and our detriment and, possibly, demise. 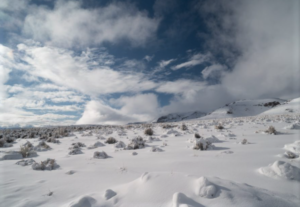 Reporting in 2015 on deadbeat cattle rancher Cliven Bundy’s armed standoff over federal grazing fees, journalist Christopher Ketcham wrote in Harper’s that the so-called Sagebrush Rebellion — the Western resistance to federal authority over public lands and water — has always been centered in Nevada. That rebellion proffered the noxious idea that public lands should be maximally exploited for private gain.

For information on donating, supporting, communicating or coming to Thacker Pass and joining the lithium mine blockade, click here.