Curbing drilling on federal lands won’t do much for climate

Half of greenhouse gas emissions from fossil fuel extraction on federal lands are from coal mined in Wyoming. And the quantity is falling steadily as fewer tons of coal are burned in U.S. power plants.

This suggests that the provisions in President Biden’s Executive Order on Tackling the Climate Crisis last week to “pause new oil and natural gas leases on public lands or in offshore waters pending completion of a comprehensive review” won’t put much of a dent in U.S. emissions of carbon dioxide and other greenhouse gases. 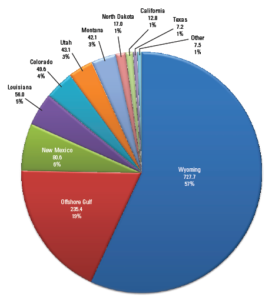 That didn’t stop leading U.S. newspapers from giving the policy announcement an enthusiastic spin. The Washington Post proclaimed that the possible ban “will deliver on one of Biden’s boldest climate campaign pledges,” while the New York Times said it “will effectively launch his agenda to combat climate change.” Both papers claimed that “Fossil fuel leasing on federal and tribal land accounts for nearly a quarter of the country’s annual carbon output” (Post) or, equivalently, “The burning of fossil fuels extracted on public lands and waters accounted for almost a quarter of all U.S. carbon dioxide emissions between 2005 and 2014.” (Times)

That “nearly a quarter” figure is out of date, however. More importantly, it’s Wyoming-skewed. Let’s look at the 2018 U.S. Geological Survey report to which the Times story linked.

Of the 1,279 million tonnes of CO2 emitted in 2014 from fossil fuels mined or drilled on federal lands (a figure provided elsewhere in the USGS report, which only goes to 2014), fully 57 percent originated with coal mined from Wyoming, largely from the state’s Powder River Basin.

Coal mining isn’t mentioned in Biden’s Jan. 27 executive order, save for brief promises to devise new policies on royalties, worker retraining, and community transition, probably owing to two reasons: most coal-fired power plants lock in their fuel supply with long-term contracts to ensure that coal quality matches up with plant equipment; and coal burning to make electricity is in free fall — it shrank nearly by half from its 2005 peak to 2019 — reducing the urgency of curbing supplies.

Wyoming’s coal production hasn’t fallen quite as fast, according to data compiled by the state’s Geological Survey: by 41 percent from its 2008 peak and 29 percent from the 2014 base that USGS drew upon for its calculations. Nevertheless, a back-of-the-envelope calculation suggests that in 2019 federal lands’ share of U.S. CO2 from fossil fuels dipped below 20 percent, with Wyoming coal still accounting for nearly half (48 percent) of those emissions. 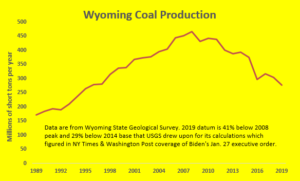 Of course, some U.S. oil and gas supply does originate in federal lands. The USGS pie-chart associates 19 percent of U.S. 2014 fossil fuel CO2 emissions with offshore gulf wells, while the American Petroleum Institute estimates that 22 percent of U.S. oil production and 12 percent of natural gas production currently takes place on federal land and water, as reported by the Post. Yet at least in the short term and, likely, far longer, plugging up new supplies in federally owned waters would simply divert production to other onshore areas or overseas. Demand it, and they will supply.

Since our founding in 2007, we at Carbon Tax Center have stressed repeatedly — as in our 2016 post, “Keep It In The Ground” Needs a Carbon Tax — that fossil fuel use and CO2 emissions are fundamentally a product of demand, not supply.

This perspective has lost currency of late in the rush to cast the work to save Earth’s climate as a Manichean struggle between the world’s people and the global oil industry — and to absolve individuals of any responsibility in consumption patterns and decisions. But it’s no less true for being out of fashion.

And the policy tool of internalizing climate damage costs in the prices of fossil fuels by taxing carbon emissions is no less essential than before. Indeed, it’s more vital than ever.

Meanwhile, how can Pres. Biden and the Democratic Congress move to forestall economic and social suffering from Wyoming’s contracting coal industry? We touted one solution in 2016, harvesting the state’s enormous wind resources to replace “coal by wire” with “wind by wire.” The new administration could also site a federal green-jobs program in Gillette, WY, the heart of the Powder River coal basin, to produce windmill blades or electric postal vehicles or mass transit railcars. The particular choice isn’t critical. Let the just transition begin now.