[A similar version of this post was published earlier today in Streetsblog.]

These are takeaways from the explosive New York Times story last week reporting that an estimated 550,000 U.S. diesel pickup trucks are being driven with compromised anti-pollution devices, making them super-emitters. 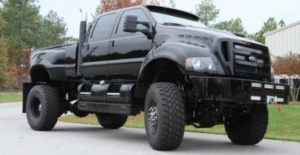 For decades, every gasoline or diesel powered sedan, SUV, pickup and motorcycle sold in the 50 states has come with emission-reducing filters, catalysts and control systems. And for just about every make and model there’s an aftermarket product that lets the owner weaken these systems or disable them altogether.

These nefarious products range from software patches called “tuners” that reprogram the software that calibrates engine functioning, to “straight pipes” that bypass exhaust gas controls and, as one purveyor puts it, “allow a car engine to flex its muscles and to make as much noise as it wants.” Purchasing and installing these devices isn’t rocket science, as evidenced by the fact that nearly 15 percent of “Class 2b and 3” diesel pickups on the road today — vehicles weighing 8,000 to 14,000 pounds — have missing or inactivated emission controls, according to the federal Environmental Protection Agency.

The result is massive excess per-vehicle emissions of on-road vehicles’ two most health-damaging pollutants: 30 to 300 times higher emissions of nitrogen oxides (NOx) and 15 to 40 times more particulate matter, according to a five-year EPA research project uncovered last week by Times environmental reporter Coral Davenport. (Her sleuthing may have been aided by rising EPA staff resistance to Trump administration regulatory teardowns in anticipation of the pending presidential changeover.)

The rampant lawbreaking goes far beyond even those figures, since EPA’s Office of Civil Enforcement examined only diesel pickups. According to Davenport, similar defeat devices, which let drivers accelerate more quickly and loudly, “almost certainly have been installed in millions of other vehicles.”

California has proven that robust enforcement can drastically shrink the problem. But a more surefire way to plug this gaping leak in America’s tailpipe regulatory regime is to do away with tailpipes altogether by replacing combustion with electricity, which effectively substitutes hundreds of closely-monitored (and, increasingly, zero-carbon) power plants for millions of wrench-heads.

The danger of ‘aggro bros’

The second takeaway has to do with the veneration of torque and thrust that impels legions of our countrymen (yes, they’re mostly male) to sideline four decades of hard-won antipollution progress and remake their vehicles as 1980s-era gross emitters.

The charitable interpretation is that, save for a relative handful of “Rolling Coal” lunatics, these engine offenders may not fully grasp how baldly their aftermarket escapades are magnifying their vehicles’ emissions. However, a more compelling interpretation employs the lens of “petro-masculinity”; that’s Virginia Tech political-science professor Cara Daggett’s term for the “toxic combination of climate denial, racism and misogyny” that she sees emerging in response to climate change.

“The concept of petro-masculinity suggests that fossil fuels mean more than profit,” Daggett wrote in her groundbreaking 2018 article, “Petro-masculinity: Fossil Fuels and Authoritarian Desire.” “Fossil fuels also contribute to making identities,” she mused, and “fossil fuel use can function as a violent compensatory practice in reaction to gender and climate trouble.” (My colleagues at Streetsblog USA also raised this issue earlier this year.)

Highways full of gas-guzzling trucks and SUVs are a distillation of so much of the past four years, and indeed the entire fight over climate action. Vehicles have become one of the status symbols that define where you fit in the culture war, whether it’s a big, strong truck, a hybrid Prius, or a bike. This weekend’s trucks clogging the highway and needlessly polluting are a big middle finger to climate activists and others trying to draw down emissions to protect their and future generations.

Perhaps when Trump is shown the door his fans will torch the factories making N-95 masks. That’ll show the libs!

Some good news from the Golden State

Takeaway #3 is — get ready — good news: California, the state that for the past half-century has defined effective environmental governance, has held vehicle emissions tampering to a minimum.

This story isn’t about “rolling coal,” but the toxic masculinity behind it has become an obstacle to climate progress.

State data breakdowns in the EPA report indicate that compromised diesel pickup pollution systems are only one-sixth as widespread in California as in the rest of the country: 27 per 1,000 pickups in the Golden State vs. 158 per 1,000 for the other 49 states. (The next best rate after California, New Jersey’s 91 tampered pickups per 1,000, is more than three times California’s rate.)

Expressed differently, if emissions tampering in California were as prevalent as in the rest of the U.S., the state would have 51,000 diesel pickup super-spreaders rather than the roughly 9,000 estimated by EPA. The effect would be stark: more asthma attacks, more worker and student sick days, more pulmonary hospitalizations, and more premature deaths across the nation’s most populous state.

What’s California’s secret sauce for preventing diesel tampering? It’s actually two sauces: an upstream part that bars every link in the aftermarket supply chain — manufacturers, distributors, dealers, installers, repair shops and vehicle owners — from selling or installing a long list of proscribed emissions tampering tuners and equipment. (This California Air Resources Board enforcement advisory has details.) And a downstream part that subjects Class 2b and 3 diesel trucks to annual Smog Checks that visually inspect the vehicle’s On Board Diagnostic emission control governor and also keep a lookout for possible aftermarket reprogramming or removal of exhaust components. 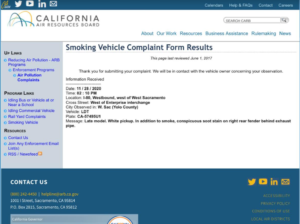 A CTC supporter received this notice from CARB last week after observing and reporting a gross emitter in West Sacramento.

Since 2012, the California Air Resources Board has enforced 53 cases, collecting $17.5 million in fines, almost entirely from businesses, according to an agency spokesperson I contacted for this story. It’s the same Golden State diligence I reported last year in “California Stars,” a report concluding that since the 1970s the state had surpassed the rest of the country by 25 percent in its uptake of energy efficiency, solar panels and wind turbines. And again this year, when two U-C Santa Barbara economists found that the state’s carbon cap-and-trade program was appreciably narrowing the “environmental justice gap” between rich white and poor Black and brown neighborhoods and communities, as I reported for the Carbon Tax Center.

Law and culture are intertwined. Maybe by now there’s something baked into the state’s culture that bends stakeholders — even grease monkeys and aggro drivers — toward adherence with laws that protect lungs and produce blue skies.