The main value of a carbon tax is normative. 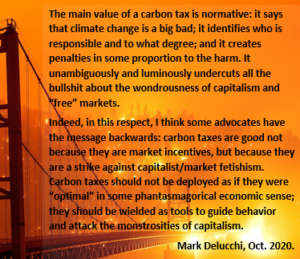 Of the dozens of replies to our two latest posts — last week’s tutorial about carbon pricing’s success in narrowing California’s “EJ gap” and this week’s appeal to climate hawks to stop disparaging carbon pricing and instead welcome it as a pillar of climate policy — the one that struck with the greatest force was this message shown at right from U-C Berkeley cost-benefit analyst Mark Delucchi.

Mark, you could say, is a heavy hitter. Starting around 1990 he gained renown for his monumental work cataloguing and quantifying the societal costs of U.S. motor vehicle use. This 1996 article in the University of California Transportation Center’s Access journal only hints at the range and erudition of that immense project, but is nevertheless a good introduction to Mark’s work.

He later teamed up with Stanford civil and environmental engineering professor Mark Z. Jacobson to generate an equally prodigious series of “roadmaps” outlining, at the state, national and global levels, the logistics and benefits of converting the world’s energy systems entirely to “100% wind, water and sunlight.” For a compelling and accessible entree to that body of work see this 2016 article in Science Direct. 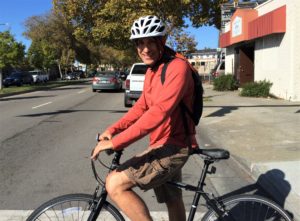 Mark’s message about carbon taxing, which I’ve lifted from an email he sent, speaks for itself. I’m particularly drawn to his appeal to deploy carbon taxes not in specious pursuit of absolute economic efficiency, but to guide behavior.

Of late, among the left it has become fashionable — obligatory, even — to denigrate carbon pricing as a neoliberal “market measure” and to dismiss the quest to enact carbon taxes as, at best, a misguided distraction, or, at worst, a means of further subjugating oppressed peoples. Mark’s framing underscores that carbon taxes are more truly the opposite: a tool with which to attack predatory capitalism and aid in the struggle for a just and sustainable world.