We can have carbon border adjustments without being complicit in colonialism

This guest post is by Daniel Ambrosio, a development finance professional working in New York. 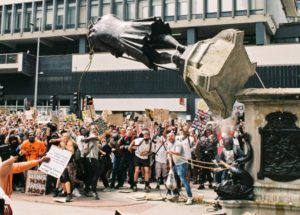 Monument to 17th Century British slave trader and member of Parliament Edward Colston in Bristol (U.K.) is toppled in June.

It is true that by themselves Carbon Border Adjustments do not address these issues. But does that omission disqualify them? Must correcting historic inequities be a requirement for any and every aspect of climate policy?

In effect, Border Adjustments supplement a local tax on carbon emissions “production” with a tax on local emissions “consumption” produced abroad. A properly designed (and WTO-compliant) border adjustment thus holds local and foreign producers to a common standard. As both Ravikumar and the EU note, this is necessary to prevent “leakage” of industrial emissions production to untaxed jurisdictions.

Leakage risks are not hypothetical. As Ravikumar notes, “globalization helped the developed world shift manufacturing and outsource its associated pollution burdens to China and other developing countries.” Systematic exemption from Western regulatory regimes for pollution, health and safety and social safety nets powerfully abetted concentration of carbon pollution in the developing world, with myriad local air and water pollution impacts. Yet Ravikumar’s article makes no mention of the possibility that developing countries might foster their own energy transition with carbon taxes, at which point EU border adjustments on imports from these countries would be moot.

A carbon tax on a marginal ton of CO2-equivalent emissions reflects historic untaxed emissions. In other words, because emissions have only just begun to be taxed, returning atmospheric concentrations to pre-industrial levels (or at least capping their rise, as is the EU’s aim, i.e., net carbon-neutral by 2050) requires a tax which internalizes not the damage of a ton of CO2 in isolation, but the damage of that additional ton in the specific context of atmospheric concentrations as they are and the distance needed to travel to meet targets.

Criticism of this approach is correct in that it is blind to 1) who caused the damage to this point, 2) how well situated an individual, firm or nation is to cope with the cost internalization, and 3) the degree of agency these individuals, firms and nations have over their emissions levels. However, the incidence of this taxation — who ultimately bears its burdens — is only one facet of how the costs are ultimately borne.

Many carbon tax proposals and implementations are committed to revenue neutrality. The intent is to price emissions and thus create an economy-wide impetus for behavioral and structural changes while holding average cost of living in place. And while revenue-neutrality does not directly address the international legacy emissions problem, it at least does not exacerbate it.

Global inequity can be addressed through use of carbon border revenues or separate climate reparations such as wealth transfers, technology transfers, concessional financing, and reduced trade barriers. Ravikumar notes, “The Green Climate Fund — established as part of the Paris [climate agreement] — is a good start, but it is not sufficient, nor has it been fully endowed.”

Revenues from carbon border adjustments could fill the funding gap. The broader point is that imposing carbon border adjustments does not preclude addressing international climate justice. Putting a price on carbon that limits regulatory arbitrage and thus discourages emissions leakage is the single most equitable way to distribute the price signals that drive low-carbon investment and behavior. It is also almost certainly a sine qua non to overcome trade-union and other worker-based opposition to carbon taxing in the U.S. and other industrial nations.

Ravikumar’s article advances its own intriguing proposals for climate equity:

Reforms to WTO rules should allow developing countries to grow a domestic green manufacturing sector without triggering a WTO dispute. Developed countries and global financial institutions should extend access to low-interest financing, as well as to technology transfer and bilateral trade and exchange programs that help build capacity for climate mitigation and adaptation in developing economies.

None of these is incompatible with a carbon taxing and border adjustment scheme. Nevertheless, given how repeatedly the article decries “colonialism,” it is worth nothing that each of Ravikumar’s proposals reflects a top-down approach likely to advantage firms with political clout, at least compared to the impartial approach of broad carbon pricing.

The article does bring to the surface a number of important considerations as the EU develops its Carbon Border Adjustment Mechanism through consultations. However, its animus toward Border Adjustments appears misplaced.