Up-to-the-minute data show a 25 percent drop in electricity generation from fossil fuels this year by the five major European nations.

Combined kilowatt-hours made from burning coal, oil and gas in France, Britain, Germany, Spain and Italy totaled 209 terawatt-hours in the first five months of 2020 vs. 279 TWh in the same period a year ago, according to data aggregated by the Renewable Energy Institute from each country’s official sources and provided to the Carbon Tax Center. (A terawatt-hour equals a million megawatt-hours or a trillion watt-hours.) 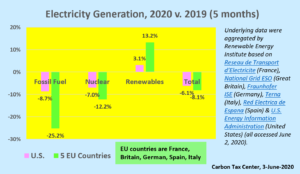 Electricity generation from fossil fuels fell 25 percent in the five largest European countries in the first five months of 2020.

Leading the way in Europe’s 2020 fossil-fuel power shrinkage is Germany, which until recently was widely maligned for prioritizing cuts to nuclear power rather than to its coal and lignite power generation since the 2011 Fukushima disaster. Through May of this year electricity production from fossil fuels in Germany is down by 29 TWh, a 31 percent drop from 2019. Britain followed close behind with a 17 GWh decline in fossil fuel power generation, a 30 percent cut from the prior year.

Propelling these declines are the lockdowns to contain the Coronavirus. Though the declines in road travel and aviation have received the lion’s share of attention, the EU and US data indicate that the power sector too has shrunk as economic activity has shriveled. Total electricity generation fell by 8 percent in the five European countries and 6 percent in the United States. Insofar as most lockdowns went into effect halfway through the period covered by the data, in mid-March, the figures suggest that the percentage declines in electricity since then may have been double the five-month figures, or on the order of 15 percent. 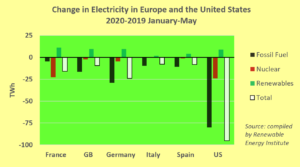 Nuclear power generation has fallen thus far in 2020 in all five countries. (The sixth, Italy, has no operating reactors.)

Curiously, nuclear power production also fell in the same period, and at a slightly greater pace than electricity generation overall: by 12 percent in the five European countries and 7 percent in the United States. (See chart at right, courtesy of the Renewable Energy Institute.) However, those declines were substantially offset by gains in renewable electricity generation, which in turn may have been abetted by what AccuWeather is calling the sunniest spring in Germany’s and England’s recorded histories.

“When demand falls, as it has during the Covid-19 pandemic due to measures taken to reduce the spreading of the virus, it is the fuel-based power generation that is economically hit,” wrote Tomas Kåberger, REI executive board chair, and Romain Zissler, senior researcher at REI, in a blog post reporting the 2020 and 2019 electricity data. “Falling demand results in lower prices in competitive markets,” they noted. And while “falling prices affect all producers’ margins, those who really suffer are the owners of power plants that have marginal costs so high that they cannot produce electricity at all,” wrote Kåberger and Zissler. “They lose all income, demonstrating the high risk of investing in fuel-based electricity generation.”

While the contractions in economic activity from the Coronavirus are expected to be transitory, the climate crisis of course is ongoing and deepening. Nevertheless, the data presented here demonstrate how the combination of electricity savings and renewable energy can leverage rapid decreases in fossil fuel-generated power and its carbon emissions.

When official GDP data are reported, it is likely that both the 25 percent drop in fossil fuel electricity in western Europe and the 9 percent decline in the United States in the first five months of the year will have exceeded the percentage decreases in economic activity. The job of western societies and governments is to expand policies to perpetuate and deepen the fossil fuel reductions during times of prosperity.

These 2020 findings mirror CTC’s analysis from last week demonstrating that during the 14-year period from 2005 to 2019, the combined effects of increased wind power, expanded solar electricity and continued growth in electricity savings accounted for the lion’s share of the enormous (one-third) drop in CO2 emissions from the United States power sector, far outpacing the contribution from replacing coal with fracked methane.