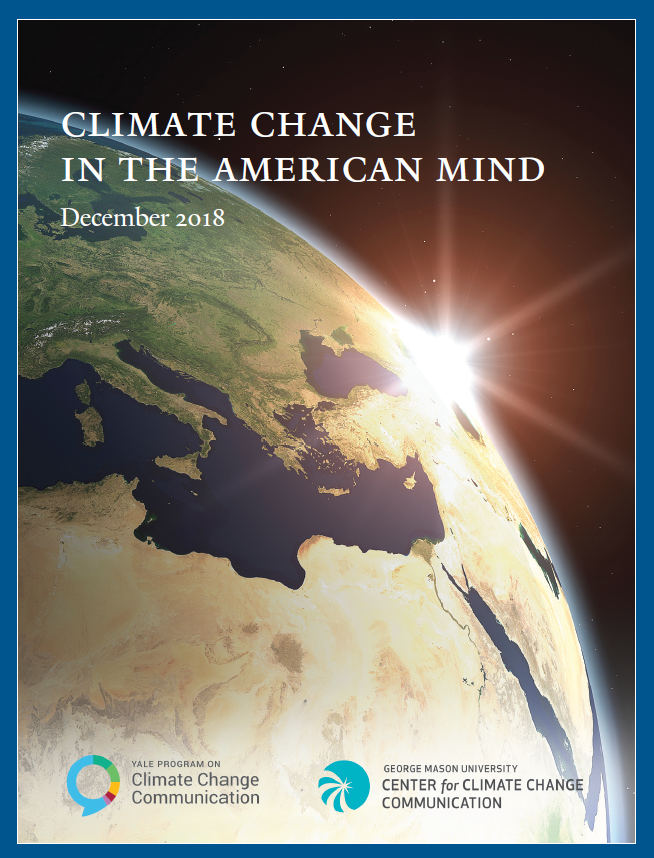 Cover of the Yale-George Mason poll report — the 19th in the decade-long series.

Nearly half of Americans (46%) say they have personally experienced effects of global warming, and roughly the same proportion (48%) believe people in the U.S. are being harmed by global warming “right now,” the Yale-George Mason team reports. Both figures are roughly one-third (15-16 points) higher than in prior surveys and are drawn from interviews with 1,114 adults conducted between Nov 28 and Dec 11 — a period that followed on the heels of the “Camp Fire” that devastated the northern California town of Paradise, but months removed from broiling summer weather in most parts of the country.

More than six in ten Americans (62%) now understand that global warming is largely human-caused, a 10-point increase from March 2015, according to the poll, which may be downloaded in summary (HTML) or full (pdf). Nevertheless, only one in five (20%) recognize the vast agreement among climate scientists around that conclusion, suggesting that the decades-long media-abetted campaign to present “both sides” has obscured this vital scientific consensus.

Here’s how the poll authors reported their key findings:

It’s well-known that political change is driven not just by yes-or-no poll figures but by salience — how strongly voters care, and whether they feel an issue personally. The Yale-George Mason poll found a record 72 percent of Americans responding that the issue of global warming is “personally important” to them. That figure is up by nine points from the previous poll last March, and the first time since November 2008 that the percentage reached 70. 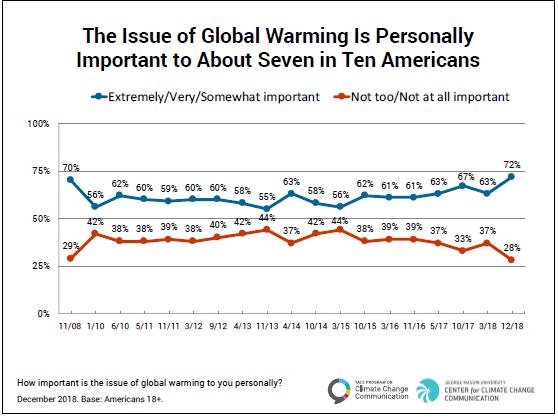 Record-high acknowledgment that climate matters, though still short of a slam-dunk. One of many striking charts in the Yale-George Mason report.

The downside to this figure is not just that 28 percent called global warming either not too important or not at all important, but that it took a full decade to regain the high ground of the 2008 poll. Though the report doesn’t include cross-tabs by political allegiance, it’s virtually certain that the persistent “not important” shares, especially from 2010 through last March, reflect  the tendency of many Republicans, knowing that party identity is partly centered around extractionism and climate denialism, to reject the reality of climate change.

The poll did not ask policy questions, so it has no new data on carbon tax acceptance. This is probably just as well in light of the fluid state of opinion on carbon taxing, not just among the public but on the part of climate advocates. Whether or not a carbon tax is included among Green New Deal proposals being aired in the activist community and Democratic Party circles could help determine what future polling has to say about Americans’ acceptance of carbon taxes as denialism and unconcern lose their hold on public opinion.