This post was has been updated to include a video link to Rep. Ocasio-Cortez’s extended conversation with writer Ta-Nehisi Coates and to provide the full quote of her endorsement of externality pricing.

Alexandria Ocasio-Cortez, the newly installed Congressmember from parts of Queens and the Bronx in New York City and the Democratic Party’s brightest new star in at least a generation, breathed fresh life into carbon taxing today from the stage of Manhattan’s fabled Riverside Church. Her remarks came during “MLK NOW,” a day celebrating Martin Luther King’s life and work combating militarism, materialism and white supremacy.

The commemoration was held six days after what would have been Dr. King’s 90th birthday, and more than a half-century after King ascended the Riverside pulpit to deliver his prophetic speech, Beyond Vietnam. Ocasio-Cortez alluded to the condemnation that rained down on King in the last year of his life for demanding the U.S. end the Vietnam War, saying “King didn’t just sacrifice his life; the way he lived his life was a sacrifice.” 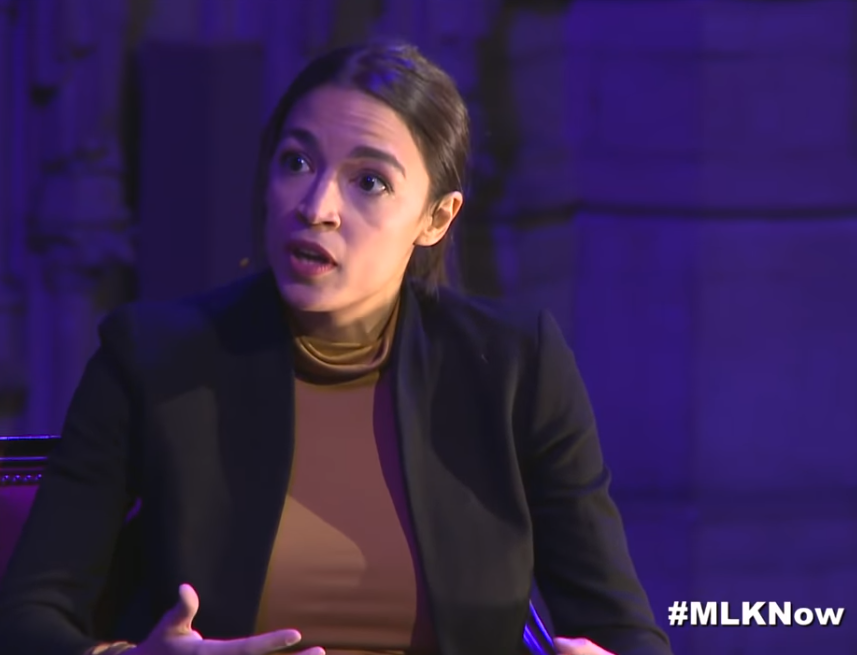 Ocasio-Cortez spoke in an extended on-stage conversation with renowned author and public-intellectual Ta-Nehisi Coates. Their full, 51-minute conversation may be viewed on YouTube (from the 14:00 mark to 1:05:30). Covering a broad range, the two discussed her call to raise the marginal tax rate on high income to 70 percent; “the case for reparations” — a matter that Coates brought to prominence in his 2014 Atlantic Monthly article with that title; and her conviction that what’s immoral about billionaires is not them as individuals but the system that allows and valorizes them.

Toward the end, Ocasio-Cortez steered the conversation to the climate crisis and called for “structuring an economy that is sustainable, where “the externalities of the damage of some industries or markets get internalized.” (at 1:00:56, emphasis added) There, in a nutshell, is the polluter-pays principle that underlies the idea of taxing carbon emissions.

The remark is noteworthy given Ocasio-Cortez’s prominence in advocating a Green New Deal, the idea of a wartime-style mobilization of government and business to build a net-zero-carbon economy over the next decade. We at the Carbon Tax Center believe that a robust carbon tax must be a pillar in any Green New Deal, not just as a “pay-for” but as a means to incentivize the massive changes in behavior, investment and societal defaults necessary to move U.S. society off fossil fuels.

On a personal note, the Riverside Church event was my first time seeing Ocasio-Cortez in person and hearing her speak extemporaneously and at length. What I saw, heard and felt easily surpassed the hype. Throughout her 50 minutes on stage, she came off as grounded, determined, forceful, informed, fluent and thoroughly conversant with the history and vocabulary of U.S. popular protest and social movements. And, somehow, commanding yet modest.

Not long after Ocasio-Cortez began, I whipped out my pen and pad and jotted down some of her most telling sentences as best I could. Here are some, concluding with the “externality” quote.

Activism is part of governance.

People think of elective office as a leadership position [yet] the real leaders are the writers, journalists, activists and artists.

Marginal tax rates are an economic question, but they’re also a moral question. 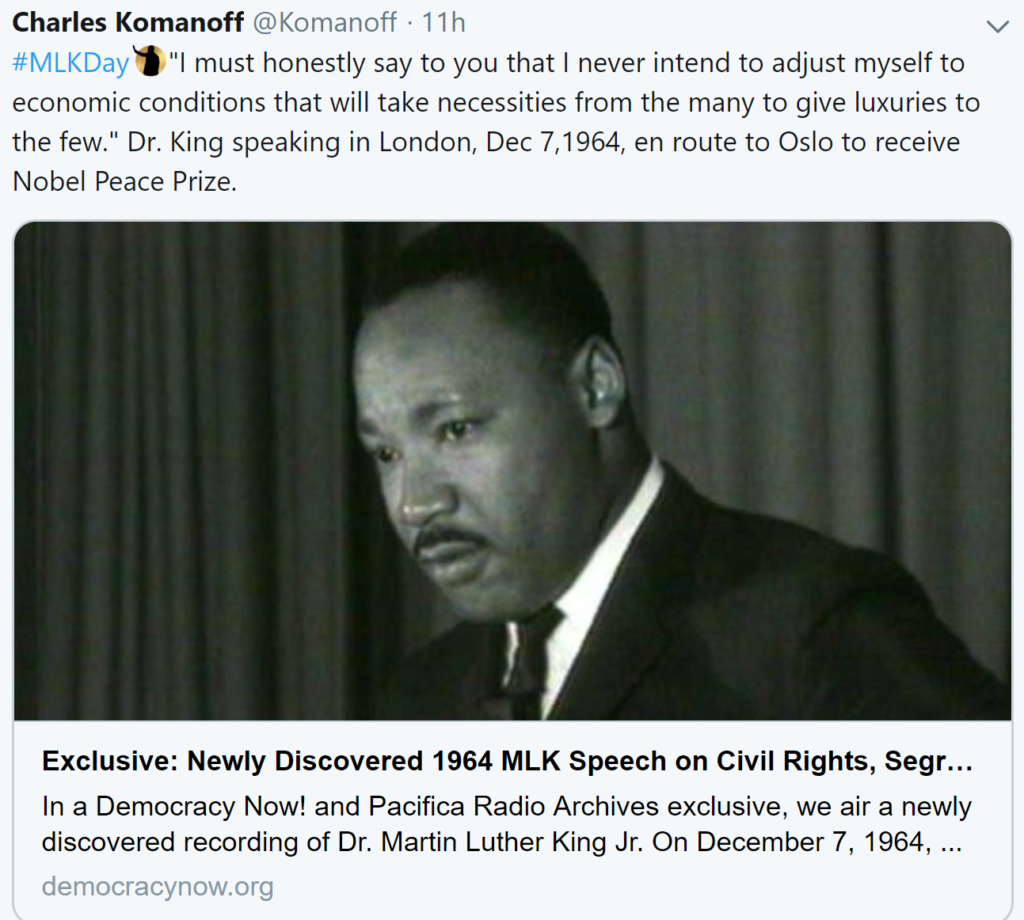 “Where do we draw the line in material excess is a question that King asked, that Gandhi asked.” — Alexandria Ocasio-Cortez.

Where do we draw the line in material excess is a question that King asked, that Gandhi asked.

We think of reparations as repairing the damages of slavery, but it’s also the reparation of the damages from the [exclusionary] New Deal and redlining.

I use social media as much to listen as to speak.

We don’t have to compromise our values to find common ground with other people.

The world is going to end in 12 years [due to climate change] and you’re worried about how we’re going to pay for it?

Until we all start pitching in and holding people accountable, I’m going to let [our enemies] have it.

There was once almost a consensus among our great thinkers [including] Einstein and Dr. King that capitalism had an expiration date.

Democratic Socialism means introducing modes of democracy beyond just elections and throughout the economy . . . structuring an economy that is sustainable, where the externalities of the damage of some industries or markets get internalized.

In bookends to her remarks, Ocasio-Cortez explained why she’s not fearful about taking strong stands. As a Puerto Rican teen in a white suburban high school, she said, she learned not to pay attention when someone tried to put her down. Now, in Congress, she sees herself not as an individual seeking to rise in politics who must practice caution but as a participant in an unstoppable movement to advance democracy and create a just society.

Note: Dr. King’s 1964 speech referenced in my tweet may be found here.