We mentioned here in mid-summer that climate journalists were disdaining the Climate Solutions Caucus as “greenwashing for GOP denialists.” Now a prominent energy-and-climate newsletter is out with a roundup of Republican caucus members’ re-election efforts that adds fuel to that charge. 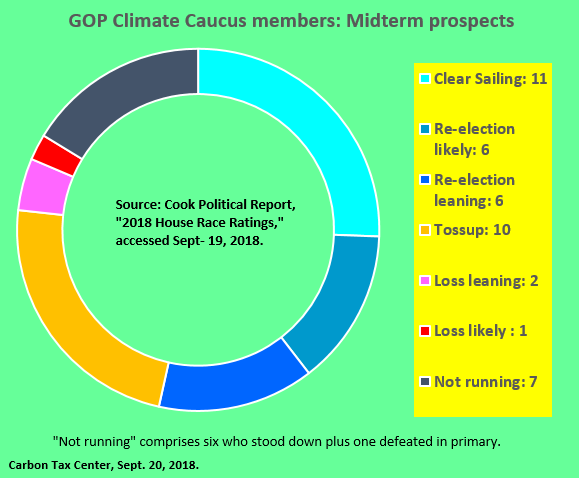 At least 10 and perhaps many more of the 43 Republican members of the House Climate Solutions Caucus appear likely to be gone when the 116th Congress convenes in January.

This is from Rep. Love’s latest mailer to constituents:

Mia Love knows that we need action, not words, on improving our environment. That’s why she regularly engages with her fellow members of the Climate Solutions Caucus to craft and advance policies that promote environmental stewardship.

Similarly, the ClearPath Action Fund, which aims to “elect Republican clean energy champions,” is insisting in Facebook ads that Rep. Knight’s caucus membership demonstrates that he “puts California before party politics.” An aide to Rep. Roskam, meanwhile, recently pointed to his joining the caucus as evidence that he “has always been a friend to the environment,” reports ClimateWire’s Matthews.

Yet neither Love nor Knight nor Roskam is known to have written, sponsored or even endorsed any substantive “green” legislation during their Congressional tenure. “Engaging” with caucus members, it’s fair to say, is basically a smokescreen to cover Republicans’ stonewalling on federal climate action.

More than fear of a Democratic “blue wave” is making GOP Congressmembers flaunt their caucus badges. Environment again matters these days, a turnaround that the Pew Research Center first reported back in January:

Economic issues — improving the job situation, strengthening the economy and reducing the budget deficit — are viewed as less important policy priorities than they were just a few years ago. Other issues, which had been less prominent public priorities in the past, have grown in importance. The share of Americans saying that protecting the environment should be a top policy priority has increased 18 percentage points since 2010 (from 44% to 62%), and seven points in the past year alone. (emphasis added)

Or, as veteran political journalist Stuart Rothenberg pointed out this week in Roll Call, “It’s NOT the Economy, Stupid. With growth up [and] unemployment down, voters are focusing on other issues,” environment among them. Needless to say, massive climate-charged flooding in the Carolinas and forest conflagrations across California and the West, coupled with the Trump administration’s “climate arson” in gratuitously torching methane-leak rules and other no-brainer regulations, are likely to keep climate and environment on the front burner in the run-up to the November midterms.

How fares the Republican half of the Climate Solutions Caucus in all this? Not well. Our donut chart (above) displays all 43 GOP caucus seats according to their re-election chances, as rated by the widely admired Cook Political Report. Seven members aren’t running for re-election and another three are deemed likely to lose on Nov. 6 or “leaning” that way. Another ten races, including those by Knight and Roskam (mentioned earlier) are considered tossups, making a total of 20 in jeopardy — not counting six rated as leaning toward a win (that group includes Mia Love along with Rep. Carlos Curbelo of Florida) and six likely to win. We singled out Curbelo in July for “blazing a path” with the first Republican carbon-tax bill in a decade.

Only eleven of the 43 races for the GOP Climate Solutions Caucus aren’t “competitive” for Democrats, according to the Cook report, which is why Matthews of ClimateWire headlined his post, “Climate caucus’s GOP ranks could plummet.”

That GOP caucus members are especially vulnerable to a November blue wave isn’t surprising, since it’s their district’s blue or purple tinge that led many of them to declare climate concern in the first place. Regardless, a wave that swamps the caucus’s Republican side could open the floodgates to congressional hearings and, eventually, action, on genuine climate solutions.

Oct. 2 addendum: The Democratic challenger to Rep. Peter Roskam (R-IL), mentioned at the top, is Sean Casten, whom the NY Times today described as “a scientist and clean-energy businessman” in its contrarian article, Floods. Wildfires. Yet Few Candidates Are Running on Climate Change.