As the U.S. president holds the world hostage to his impending decision to accept or repudiate the Paris Climate Agreement, it’s worth noting that the United States could meet its Paris emissions pledge by adopting a Republican-branded carbon tax proposal.

That’s the so-called Baker-Shultz carbon tax devised by the Climate Leadership Council and released in February by a team of Republican luminaries headed by Reagan Secretary of State George Shultz and George H.W. Bush Secretary of State James Baker. The CLC proposal, dubbed “The Conservative Case for Carbon Dividends,” would tax U.S. CO2 emissions from fossil-fuel combustion at $40 per ton and return the revenues in equal shares to American families (thus the “dividends” in the proposal’s name). 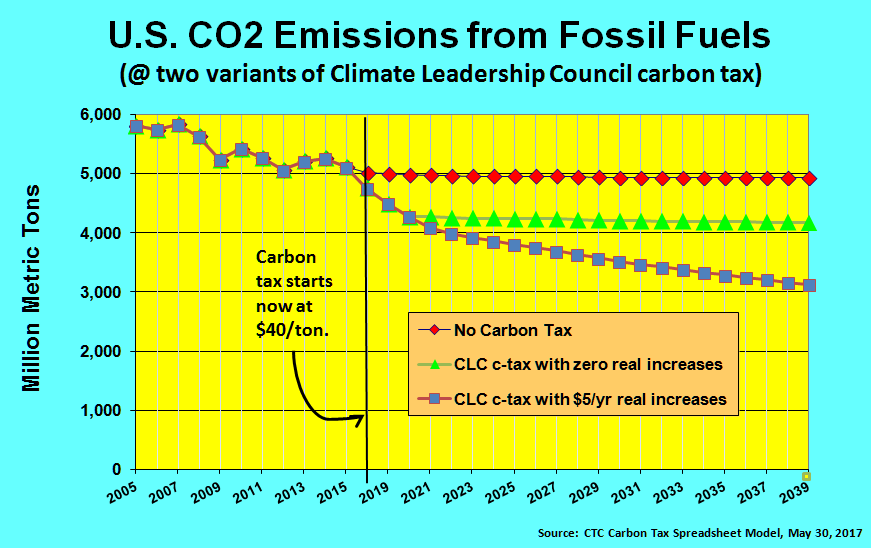 As the Associated Press reminded us at the onset of the holiday weekend, “nearly 200 countries are part of the Paris accord and each set their own emissions targets, which are not legally binding. The U.S. pledged to reduce its annual greenhouse gas emissions in 2025 by 26 to 28 percent below 2005 levels, which would be a reduction of about 1.6 billion tons of annual emissions.”

With informed sources such as Inside Climate News and the New Republic insisting that Trump’s rescission of Pres. Obama’s Clean Power Plan puts our Paris target out of reach, we decided to run our carbon-tax spreadsheet model on the CLC proposal. The result was a bullseye: the model calculates that implementing an economy-wide charge of $40/ton of CO2 on U.S. coal, oil and gas combustion in 2018 would, by 2025, result in total CO2 emissions of 4,242 billion metric tons — a figure 27% less than 2005 baseline emissions of 5,812 billion metric tons. That’s smack in the center of our country’s pledge to reduce emissions by 26% to 28%.

Our numerical finding closely matches CLC’s own estimate of a 28 percent drop in emissions in 2025 vs. 2005 from the $40/ton CO2 charge. And while a majority of the forecasted reduction in emissions from today to 2025 would be in the electricity sector, the expected 45 percent share of reductions in the other sectors (passenger auto and air travel, freight movement, oil refining, etc.) is a big increase from those sectors’ 27 percent share of reductions from 2005 to 2015, reflecting the carbon tax’s power to reduce fossil fuels use more broadly than targeted regulations.

One, CLC’s modeling assumes a 2% per year real increase in the carbon tax following the initial startup at $40/ton. We’ve conservatively assumed zero increase, although our graph also shows a steeper reduction predicated on raising the initial charge by $5 per ton per year.

Two, our two curves coincide for the first few years and begin diverging only in 2021. That’s because we’ve built a “brake” into our model that limits the economy’s uptake of the carbon charge to a rate of $12.50 per ton per year; increases beyond that are carried over into future years. Thus, the full impact of the $40 initial charge imposed in 2018 isn’t felt until 2021. 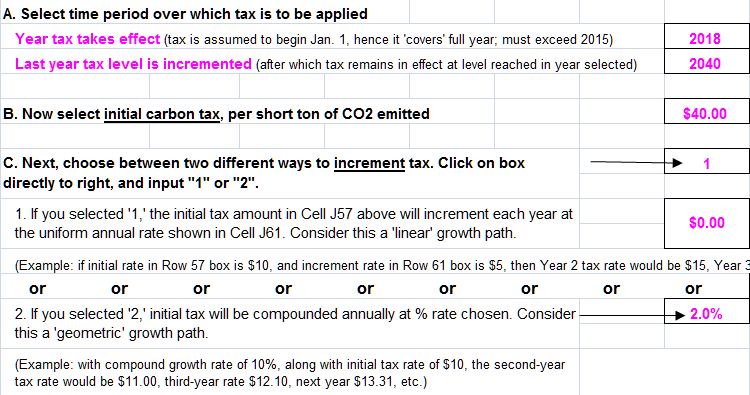 You can input your own carbon tax rates into our model. This screen is on the spreadsheet’s Summary page.

Three,  the U.S. Paris commitment of a 26-28 percent reduction applies to all greenhouse gases, not just CO2. But since non-CO2 GHG’s such as methane are considered to have more low-hanging fruit, on average, being able to achieve a 27% reduction in CO2 by 2025 should virtually guarantee hitting the target of 27% less greenhouse gases.

Note that we label the Baker-Shultz proposal “Republican-branded” rather than “Republican,” preferring to reserve the latter designation for current Republican office-holders. But it’s striking nevertheless that a carbon tax proposal advanced by erstwhile Republican icons — Messrs. Baker and Shultz held many other senior positions even beyond secretary of state — could enable the present Republican administration to meet our country’s Paris climate-protection targets, and to do so in a straightforward, non-regulatory, “market-friendly” fashion that was once considered a bedrock G.O.P. principle.

We’re updating our carbon-tax model to the latest (2016) baseline. Watch this space for its release in June.