“A climate solution where all sides can win”

Perhaps no one in the U.S. has done more lately to drive public and political opinion toward carbon taxes than Ted Halstead and his Climate Leadership Council. The council’s Conservative Case For Carbon Dividends is the first Republican-based carbon tax proposal to insist not only on starting high (at $40 per ton of CO2) but also “dividend-ing” the revenues to U.S. families rather than using them to pay for corporate tax cuts (as favored by the political right) or investing them in transit, renewables and other elements of “the just transition” (as favored by much of the left).

This income-progressive but limited-government path, which Halstead and the council astutely brand as Republican, has generated a broad swath of editorial support, not just on the two coasts but also in conservative, carbon-heavy Texas. Partly that’s because the proposal would downsize or outright rescind direct federal regulation of carbon emissions, which the council argues would be mooted by the market pull of a robust (and rising) carbon tax. It’s also because Halstead has the verbal facility and personal magnetism to make his points appealing and convincing.

Not just his first name, then, makes Halstead an ideal “TED” talker, as you can see in the 11-minute talk (13, counting Q/A with moderator Chris Anderson) he taped in April and released yesterday.

Below, we present an abridged version of Ted’s talk. The full transcript can be viewed along with the video presentation.

These include the psychological barrier. Climate advocates have long been encouraging their fellow citizens to make short-term sacrifices now for benefits that accrue to other people in other countries 30 or 40 years in the future. It just doesn’t fly because it runs contrary to basic human nature. 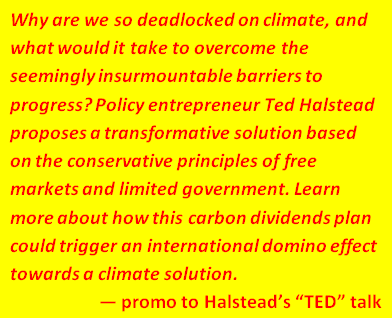 Next is the geopolitical barrier. Under the current rules of global trade, countries have a strong incentive to free-ride off the emissions reductions of other nations, instead of strengthening their own programs.

Finally, we have the partisan barrier. Even the most committed countries are nowhere near reducing emissions at the required scale and speed. And the partisan climate divide is far more acute here in the United States. We are fundamentally stuck, and that is why we need a killer app of climate policy to break through each of these barriers.

I’m convinced that the road to climate progress in the United States runs through the Republican Party and the business community. So in launching the Climate Leadership Council, I started by reaching out to a who’s who of Republican elder statesmen and business leaders, including James Baker and George Schultz, the two most respected Republican elder statesmen in America; Martin Feldstein and Greg Mankiw, the two most respected conservative economists in the country; and Henry Paulson and Rob Walton, two of the most successful and admired business leaders. Together, we co-authored “The Conservative Case For Carbon Dividends.” This represents the first time that Republican leaders put forth a concrete market-based climate solution.

Our carbon dividends solution is based on four pillars.

1. The first is a gradually rising carbon tax. Although capitalism is a wonderful system, like many operating systems, it’s prone to bugs, which, in this case, are called “market failures.” By far the largest is that market prices fail to take social and environmental costs into account. That means every market transaction is based on incorrect information. This fundamental bug of capitalism, more than any other single factor, is to blame for our climate predicament.

In theory, this should be an easy problem to fix. Economists agree that the best solution is to put a price on the carbon content of fossil fuels, otherwise known as a carbon tax. This would discourage carbon emissions in every single economic transaction, every day of the year. However, a carbon tax by itself has proven to be unpopular and a political dead end. The answer is to return all the money raised directly to citizens, in the form of equal monthly dividends. This would transform an unpopular carbon tax into a popular and populist solution, and it would also solve the underlying psychological barrier that we discussed, by giving everyone a concrete benefit in the here and now. 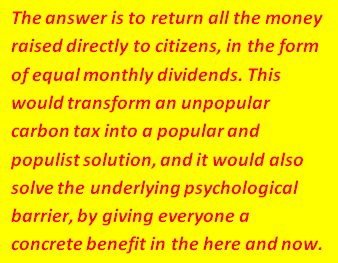 According to the US Treasury Department, the bottom 70 percent of Americans would receive more in dividends than they would pay in increased energy prices. That means 223 million Americans would win economically from solving climate change. And that is revolutionary, and could fundamentally alter climate politics.

2. But there’s another revolutionary element here. The amount of the dividend would grow as the carbon tax rate increases. The more we protect our climate, the more our citizens benefit. This creates a positive feedback loop, which is crucial, because the only way we will reach our long-term emission-reduction goals is if the carbon tax rate goes up every year.

3. The third pillar of our program is eliminating regulations that are no longer needed once a carbon dividends plan is enacted. This is a key selling point to Republicans and business leaders. So why should we trade climate regulations for a price on carbon?  Our plan would achieve nearly twice the emissions reductions of all Obama-era climate regulations combined, and nearly three times the new baseline after President Trump repeals all of those regulations. Our plan by itself would meet the high end of America’s commitment under the Paris Climate Agreement, and the emissions reductions would continue over time. We would end up with less regulation and far less pollution at the same time, while helping working-class Americans get ahead. Doesn’t that sound like something we could all support?

4. The fourth and final pillar of our program is a new climate domino effect, based on border carbon adjustments. Now that may sound complicated, but it, too, is revolutionary, because it provides us a whole new strategy to reach a global price on carbon, which is ultimately what we need. Once one major country or region adopts carbon dividends with border carbon adjustments, other countries are compelled to follow suit [to prevent paying border adjustments to countries with carbon taxes]. One by one the dominoes fall. And this domino effect could start anywhere. 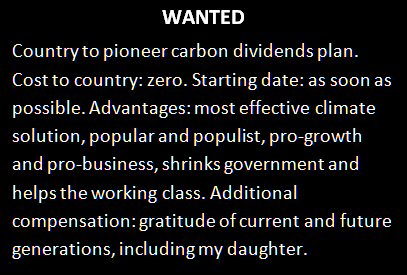 Let’s take China as an example. China is committed to reducing greenhouse gas emissions, but what its leaders care even more about is transitioning their economy to consumer-led economic development. Well, nothing could do more to hasten that transition than giving every Chinese citizen a monthly dividend. In fact, this is the only policy solution that would enable China to meet its environmental and economic goals at the same time.

That’s why this is the killer app of climate policy, because it would enable us to overcome each of the barriers we discussed earlier: the psychological barrier, the partisan barrier, and, as we’ve just seen, the geopolitical barrier. All we need is a country to lead the way. And one method of finding what you’re looking for is to take out an ad. So let’s read this (shown at left) one together.