What the Surge in U.S. Driving Says about Carbon Taxing

Driving in the United States didn’t just inch upward during the past two years, it practically erupted. Total on-road vehicle-miles traveled (VMT) by cars, trucks and buses jumped by 87.5 billion last year, after increasing the year before by 105.2 billion, according to FHWA data. The two-year increase, nearly 193 billion miles — that’s just under 600 miles for every U.S. resident — is the largest in U.S. history (see graph). 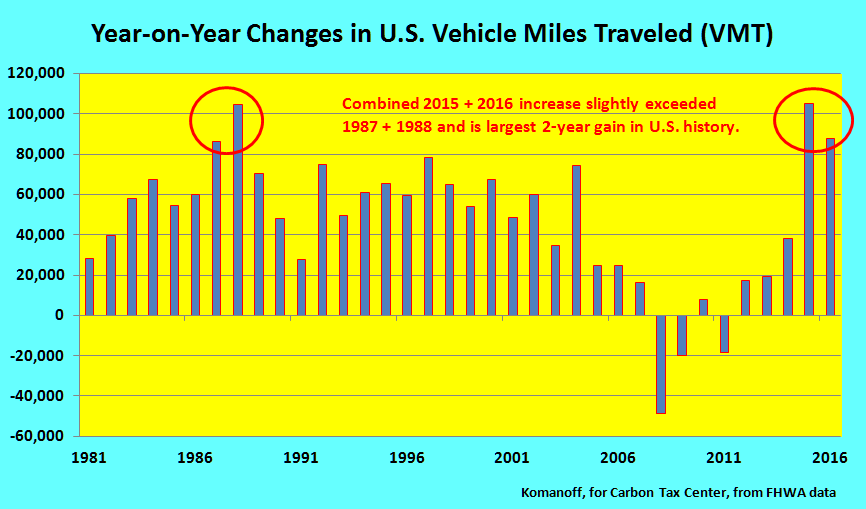 Percentage-wise, the increases may not look momentous — 3.5 percent in 2015 and another 2.8 percent last year. But the two-year growth percentage, 6.4 percent, is the highest in almost three decades. And it comes after a spate of articles and reports celebrating (or decrying, depending on one’s point of view) the arrival of “peak driving,” or, at least, peak driving per capita.

So what’s going on?

The prime factor couldn’t have been population growth; it totaled just 1.4 percent from 2014 to 2016. And let’s not over-credit 4.2 percent economic growth over the same period, since the level of driving is more molasses-like than GDP, as we discuss further below. (Also note that GDP subsumes population, so the two factors wouldn’t be additive.) What about pent-up demand from the 2008-2011 economic slowdown? It makes for good anecdotes but probably not enough to move the dial.

My candidate for key cause of the surge in U.S. driving is super-cheap gasoline, or, more precisely, the precipitous drop in U.S. gasoline prices since 2014.

A drop in gasoline prices would cause an uptick in driving. If it’s cheaper to drive a mile, or 100 miles, it stands to reason that people will drive more miles. But how much more? How sensitive is the amount of miles driven (VMT) to the price of gasoline? Or, more precisely, how sensitive are changes in VMT to changes in the price of gas?

The answer: the relationship between VMT and gas prices isn’t super-sensitive; but it’s more than zero, and enough to make a big difference in the amount of driving when gas prices take a large turn.

Let’s look at how the math works. The parameter we’re looking for is the gasoline price-elasticity of VMT (driving). Let’s say it’s negative 0.1. (Negative because a lower price means more driving; and just 0.1 because the connection is probably slim.) Now let’s say the price of gasoline drops by one-fourth, or 25%. Based on the assumed -0.1 price-elasticity, we would expect a 3% rise in driving. (Mathematically, that’s because 0.75 raised to the negative 0.1 power, written as 0.75^(-0.1), is 1.029, which denotes a 2.9% increase.)

Does that feel right? Would a one-fourth drop in the price of gas — not just over a single day or month, but over a sustained period — actually lead people to drive 3% more? Would people take more car trips, or longer trips, to that extent? It seems reasonable that they would, though how much is an empirical question. (Which is why the entire vast literature on price-elasticities is based on observed behavior.)

In the table at right I’ve run the actual drops in the price of gas through that calculation, for two possible VMT price-elasticities: (negative) 0.10, and half that value, or 0.05. For the 0.10 value, the drop in the price of gas would have evoked much or most of the observed rise in driving. For the lower 0.05 value, not so much but still a significant portion. (The influence for 2016 should actually have been greater than shown because of the lagged effect from the 2015 price drop.)

What, then, are the best estimates for the price-elasticity in the literature (again, we’re looking for the change in VMT as a function of changes in the price of gasoline)? For the past decade I’ve relied on a seminal 2007 paper by U-C Irvine transportation economists Ken Small and Kurt Van Dender in which they derived a long-run price elasticity of gasoline consumption for the U.S. of -0.38, with 46% of that being due to changes in the amount of vehicle travel. Multiplying those two figures yields a long-run elasticity of VMT with respect to the price of gasoline of -0.175.

(The Small – Van Dender paper is summarized on CTC’s Effectiveness page — drop down to the first bullet point. The paper, “Fuel Efficiency and Motor Vehicle Travel: The Declining Rebound Effect,” is available here. The result just given appears on p.24 (FN 27). Small and Van Dender also remark that the 46% share of gasoline price elasticity accounted for by VMT declined to 27% when recalibrated to prices and driving behavior observed toward the end of their sample period. It’s also true that their elasticity figures are long-run, whereas the VMT behavior we seek to explain here is short-run, implying a still-lower price-elasticity; on the other hand, when the price of gas changes it’s easier to change the amount of driving quickly than to change miles per gallon, which suggests that the short-run elasticity of VMT might not be many times smaller than the long-run figure.)

My takeaway is suggested by the table above: while numerically the gasoline price-elasticity of VMT is small, the fall in gas prices in 2015 and 2016 was so severe that it almost certainly explains a lot of the observed rise in driving. Of course, rising incomes would also have played a role, but likely a small one. The Small – Van Dender income-elasticity of driving is 0.11 in the short run and 0.53 in the long run. Assuming a value of 0.25 for our purposes, the 2.6% increase in real GDP from 2014 to 2015 would have been expected to evoke only a 0.6-0.7% increase in driving (since 1.026 raised to the 0.25 power is 1.0064); for the 1.6% rise in GDP from 2015 to 2016, the effect on driving would have been smaller still.

What does this exercise suggest about carbon taxes? Take it as yet one more demonstration that prices influence the level of usage of just about everything, including fuels, energy, even driving. The price sensitivities (elasticities) may not be enormous, but they are felt nonetheless. In 2015 and 2016 they were enough to power a record two-year rise in total U.S. miles driven. And they’ll also act in reverse, which is how a carbon tax — particularly one with a rising price trajectory that can filter out market volatility — can be so powerful in slashing gasoline use and fossil fuel use generally.

So when you see someone parading false facts like this one on the New York Times letters page earlier this month,

[F]act — as documented by the Energy Information Administration and experienced by anyone who must drive regularly regardless of cost — fuel prices have little effect on gas consumption. (The letter, from Food & Water Watch, is the third of five in that link.)

you’ll know how to push back.