Did you march on Saturday? Well over 3 million people did in 500 cities across the U.S., according to the meticulous list compiled by Professors Jeremy Pressman ( U-Conn.) and Erica Chenoweth (University of Denver). A quarter of a million in Chicago. Two hundred thousand in Denver. Twenty thousand in Houston. As many as 750,000 in Los Angeles. Fifteen to twenty thousand in Nashville, and an equal amount in tiny Montpelier, VT. Four hundred thousand in my New York City. Plus another quarter of a million in dozens of countries from Morocco to Mexico. 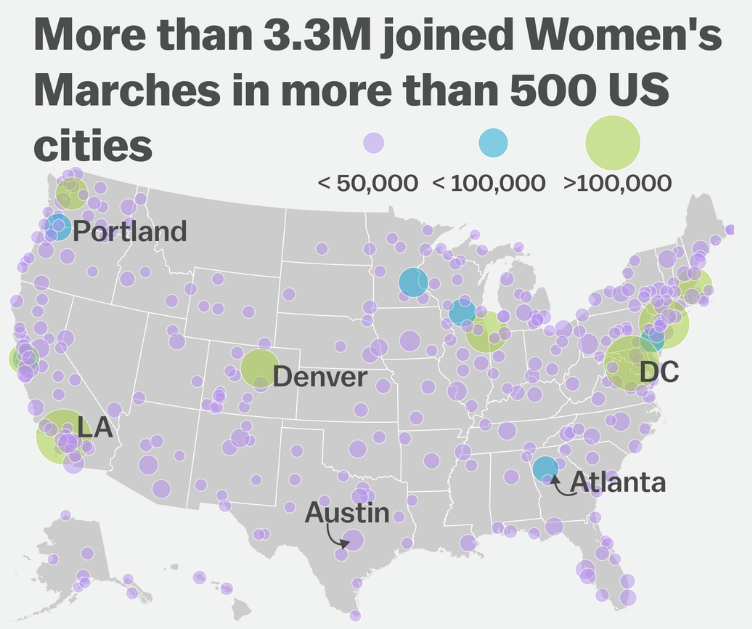 Map by Vox from figures compiled by Jeremy Pressman and Erica Chenoweth.

The resistance to what one observer has labeled “a thin-skinned authoritarian whose only real constituent is himself, and whose intentions, to the extent we can discern them, are to destroy a lot of the things that make this country (truly) great,” has begun with what may have been the largest nationwide explosion of protest in American history.

And, to borrow from our 16th president, “it is altogether fitting and proper” that this new wave of protest was conceived, organized and stamped by women. At the risk of over-generalizing, women incline more than men toward co-operation, mutuality, and inclusivity — attributes that are central to society and survival but are anathema to No. 45.

To quote from the Women’s March Web site:

We stand together in solidarity with our partners and children for the protection of our rights, our safety, our health, and our families – recognizing that our vibrant and diverse communities are the strength of our country… This march is the first step towards unifying our communities, grounded in new relationships, to create change from the grassroots level up… We work peacefully while recognizing there is no true peace without justice and equity for all.

Like most protests, the Women’s Marches had three purposes: for the country and world, including the media, to send a message; for the marchers, to fortify commitment; and for the marchers as well, to instill the belief that we are not alone and that together we can make a difference. From what I saw and felt in New York, and likewise my wife and son in DC and our other son in St. Paul, MN, the women’s marches succeeded brilliantly on all counts. 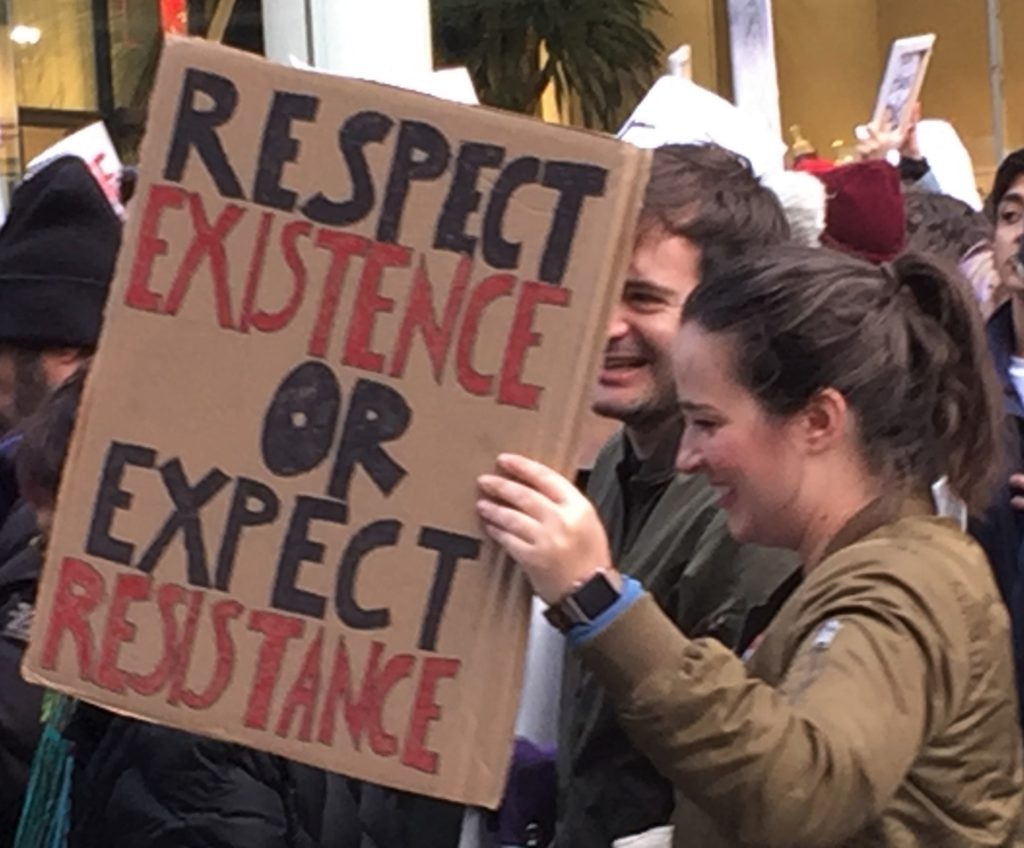 For once, the multiplicity of causes distilled in tens of thousands of homemade signs didn’t dilute the point — it was the point. Tolerance, diversity and difference — the essence of society and nature alike — are now under attack in America as perhaps never before. And of course science, fact and truth. While it was good to see the occasional “Time to Price Carbon” sign, it was appropriate that climate was just one of hundreds of concerns expressed at the rallies.

(And of course the People’s Climate Mobilization — what 350.org is calling “the launch pad for a larger, nationwide movement to fight fossil fuels at the local level” — is just 14 weeks away, on April 29. Click here to participate and organize.)

If the marchers’ joy and solidarity were stirring counterpoint to the brutalism of the swearing-in of the new regime, I experienced a similarly stark contrast on Inauguration Day. My wife engineered the near-miracle of procuring three tickets to the Smithsonian’s new National Museum of African-American History and Culture, and with our son we spent the afternoon there, sheltered from the events unfolding around us in real time. 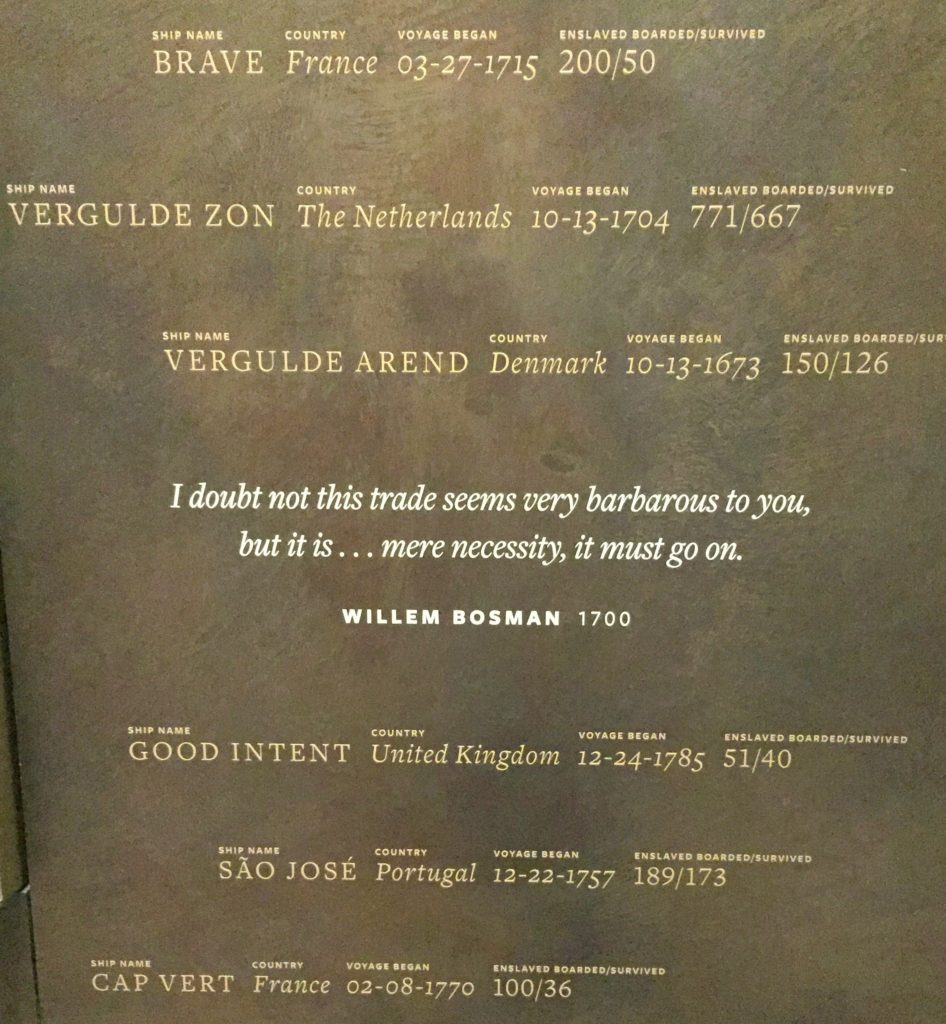 A tiny fraction of the trans-Altantic slave trade, summarized at the National Museum of African-American History and Culture.

We spent most of our time in two of the history galleries: Slavery and Freedom 1400-1877, and Defending Freedom, Defining Freedom: The Era of Segregation 1876-1968. This isn’t the venue, nor am I the vehicle, for a full account of the richness of the experience. (For that, I suggest Holland Cotter’s review, The Smithsonian African American Museum Is Here At Last: And It Uplifts and Upsets, and Wesley Morris’s essay, Visiting the African-American Museum: Waiting, Reading, Thinking, Connecting, Feeling, both in the New York Times.)

What I can report is how my immersion at the “Blacksonian” on Friday deepened my understanding of the mercantile nature of slavery. Panels reporting the ship names, flag, voyage dates, and number of slaves who were boarded in Africa and survived the Middle Passage to the Americas drove home with brutal force not just slavery’s vast scope but the web of contractual and monetary arrangements that undergirded it. “Money money money money money” I whispered to my wife as we gazed at these impassive testaments to greed and suffering. Slavery made white America rich.

As we made our way through the Freedom floor, we saw the promises of emancipation yanked away by the KKK, lynchings and Jim Crow. But the exhibits also told of W.E.B. Du Bois, A. Philip Randolph, and of course the Civil Rights Movement. The story of freedom in America is the story of struggle.

Campaigners for justice have always battled tall odds. I wrote on Nov. 10 that “fighting for a livable planet and a humane society is what I’ve done my whole life. I’m not stopping now, and I know neither are you.” The massive rejection of Trump and the calls for resistance that sounded through the land on Saturday demonstrate without doubt that we’re a movement of millions.

Photographs by the author.