A tax on sugary soft drinks in Berkeley, CA is cutting soda consumption, according to a new study. Should climate advocates care?

Absolutely. The study offers powerful real-world support for the economic principles underlying the idea that carbon taxes can and will cut use of carbon-based fossil fuels. 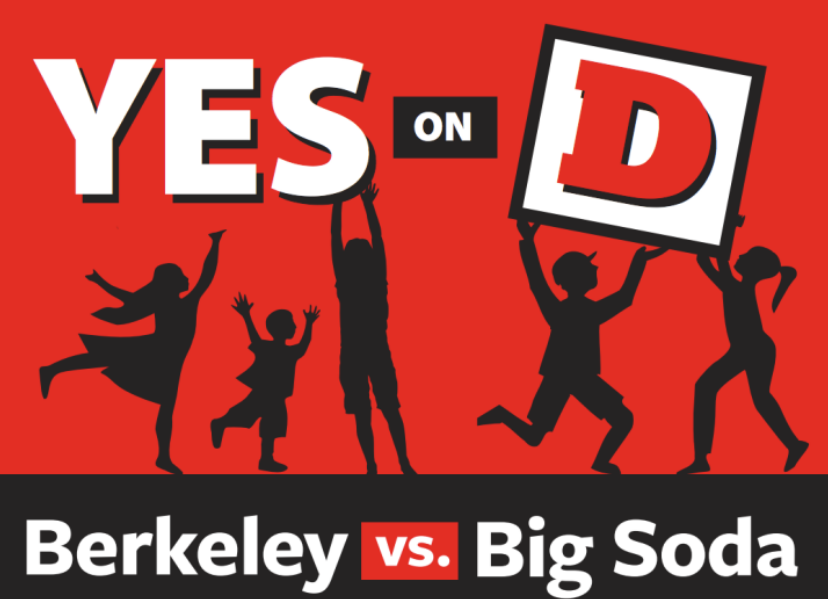 This framing helped pass Berkeley’s soda tax (on the 2014 ballot as Initiative D).

The soda study was conducted by five health specialists at the University of California’s Berkeley campus and a biostatistician-epidemiologist at U-C San Francisco. The study team distilled their findings in an article in the American Journal of Public Health this month, and last week the New York Times’ “Upshot” column reported on it under the headline, “More Evidence That Soda Taxes Cut Soda Drinking.”

It may seem obvious that taxing sugary drinks causes people to drink less of them. But that’s actually controversial. Now a new study out of Berkeley, Calif., adds to the evidence that our intuition is right.

Berkeley’s fee on sugary soft drinks, the first in the U.S., was approved in a November 2014 referendum and took effect in March 2015. It charges distributors a penny per ounce of drink on so-called sugar-sweetened beverages (SSBs). Thus, a 12-oz. soda can or bottle is taxed 12 cents, though not all of the fee is passed along in the retail price. In earlier research the study team estimated that for sodas, 69% of the penny-an-ounce tax is passed through as higher retail prices, on average; whereas for all SSBs, including energy, sports, and fruit-flavored drinks along with sweetened water, coffee and tea, as well as soda, the pass-through average is 47%.

The U-C study measured changes in beverage consumption in low-income neighborhoods as of July 2015, eight months after the vote and four months after implementation. Similar districts in nearby Oakland and San Francisco were used as a control group. Data were drawn from in-person interviews with 990 people before the tax and 1,689 after.

Based on those surveys, the authors reported that consumption of SSBs decreased 21% in Berkeley and increased 4% in the comparison cities. Water consumption increased far more in Berkeley (+63%) than in the comparison cities (+19%). Both comparisons were statistically significant, signifying that the observed differences in beverage purchases between soda-taxing Berkeley and non-soda-taxing Oakland and SF are genuine and not a product of random chance.

As the Times’ Upshot piece suggests, the main takeaway is what some of us have known all along: raising the price of a good or activity leads people to demand and consume less of it. That’s the premise behind taxing carbon emissions. But the Berkeley study offers other lessons too:

As the Times notes, the Berkeley findings are consistent with research indicating that Mexico’s nationwide soda tax cut sales of sugary drinks among poor households by 17 percent after the first year. Next up, in January, is Philadelphia’s 1.5 cents per ounce soda tax, which passed the city council several months ago.

The parallels to carbon taxing aren’t perfect, of course. The benefits of reduced soda use — less obesity, diabetes and tooth decay — are considerably closer and more personal than the benefits of clean energy. That, along with the soda tax campaign’s intentionally combative framing of “Berkeley vs. Big Soda,” may account for the extremely strong price-elasticity — a value of (minus) 2 or more — indicated by the 21% drop in SSB consumption among the surveyed residents. In CTC’s carbon-tax model, we employ far lesser price-elasticities for electricity, gasoline and other fuels: between (minus) 0.35 and 0.70, reflecting the fact that energy and fuels are more deeply wired into our economy and our behavior than are soft drinks.

Rather than extrapolate directly from the Berkeley soda tax study results, it’s best to regard them as further confirmation of the precept that taxing “bads” is a direct and effective way to make them less prevalent.

The AJPH article, “Impact of the Berkeley Excise Tax on Sugar-Sweetened Beverage Consumption,” was published on August 23, 2016. Click here for the abstract. For those interested, we calculated the soda price-elasticity by applying an approximate price increase of 0.7 cents per ounce (based on the 69% average pass-through) to an estimated average base soda retail price of 5 cents per ounce. For a 14 percent price rise (0.7 divided by 5) to effect a 21% contraction in usage, the price-elasticity must be (minus) 1.8. [Let us know via comments if you’d like to see the math for that.] Higher elasticities would result from using the 25 percent consumption drop relative to the control cities, or from applying the lesser pass-through rates for non-soda SSB’s.

New data are in from Mexico and Philadelphia, with both jurisdictions affirming that taxing sodas and other sugary drinks reduces consumption. In 2015, Mexico’s second year with the tax, purchases of sweetened beverages continued to fall. A study published in Health Affairs in Feb. 2017 provided a widely reported update on the effect of Mexico’s sugar-sweetened beverage tax on beverage purchases between 2012 and 2015. In 2014 sales fell by 5.5 percent from 2013; the reduction from 2013 grew to 9.7 percent in 2015. The decreases were greatest among the poorest households.

Philadelphia’s tax on sugary drinks went into effect on Jan. 1, and evidence from the initial month points towards significant reductions in sales. Philadelphia supermarkets and beverage sellers are reporting 30-50 percent drops in January sales, though the media narrative is focusing on threatened reductions in workforces rather than reductions in purchases. (Google “Philly soda tax” to get a taste of these headlines.) What’s not yet clear is whether soda purchases have risen significantly outside city limits. We’re looking forward to February data from Philadelphia and we’ll be keeping an eye on similar soda taxes going into effect in San Francisco, Oakland, Boulder, and Albany.

A front-page New York Times story yesterday about heavy purchases of sodas and other sugary drinks by recipients of food stamps included this passage, near the end:

In 2014, a group of Stanford researchers studied 19,000 SNAP [Supplemental Nutrition Assistance Program] participants and compared whether banning sugary drinks or incentivizing fruits and vegetables would affect obesity rates. The researchers found that the incentive program would not. But banning sugary drinks from SNAP, they said, “would be expected to significantly reduce obesity prevalence and Type 2 diabetes incidence, particularly among ages 18 to 65 and some racial and ethnic minorities.”