Only Climate Darkness at End of GOP Tunnel?

The Republican Convention is over. And it’s fair to wonder if the dream of a bipartisan carbon tax is over as well.

It’s not just the viciously hard-right emotions and ideologies so prominently on view in Cleveland. While those are disturbing enough, they could perhaps be written off as convention fever. But we can’t ignore the persistent absence of palpable climate concern in virtually the entire Republican Party. 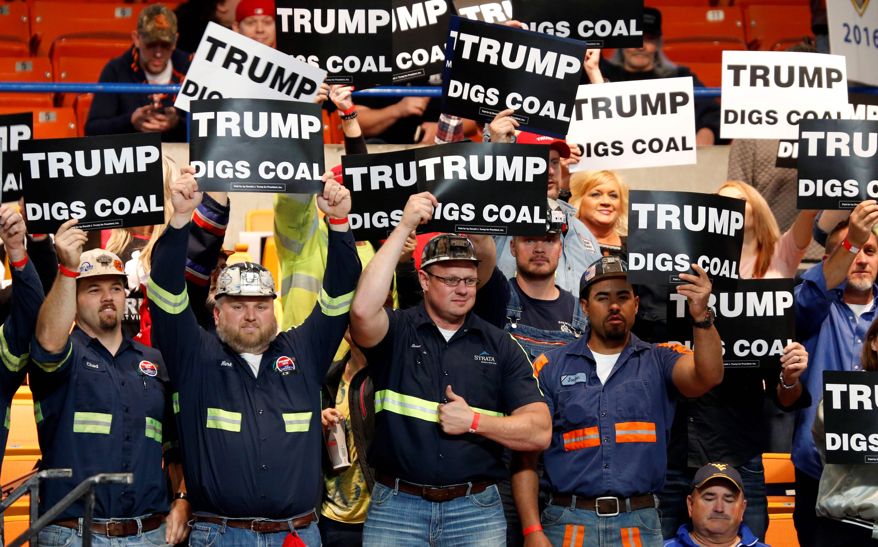 These Trump fans in West Virginia in May were more decorous than most GOP delegates in Cleveland.

Consider A Cure for Trumpism, the high-minded essay by two leading “reform conservatives” that led the New York Times’ Sunday Review section on the eve of the convention. Stretching over 2,000 words, this blueprint for a revitalized Republican Party, by Times columnist Ross Douthat and National Review editor Reihan Salam, never mentioned climate change or global warming.

There’s also the strange case of Jay Faison, the plutocrat whose ClearPath Action Fund, the Times informed us in June, “will spend at least $2 million on digital media campaigns to defend [Republican] Senate incumbents running in two of the tightest races in the country, Rob Portman in Ohio and Kelly Ayotte in New Hampshire.” That’s in “recognition of the senators’ support for clean energy,” Faison told the Times. “ClearPath is also spending several hundred thousand dollars on digital advertising campaigns to support Representatives Carlos Curbelo of Florida and Tom Reed and Elise Stefanik of New York, all Republicans running for re-election in similarly tight races,” the Times noted.

Since Faison routinely lambasts the Obama Administration’s Clean Power Plan as too regulatory, you would think he backs invisible-hand approaches like taxing carbon. Not so, according to this account in the Daily Caller:

North Carolina philanthropist Jay Faison has come out against taxing carbon dioxide emissions as a conservative solution to both fighting global warming and promoting cleaner sources of energy.

So what climate solutions does the GOP’s great green hope support, if not a carbon tax or other price mechanism? Here’s the Daily Caller again:

Faison argued [that] more needs to be done to get rid of burdensome regulations on hydroelectric dams and nuclear power plants.

There you have it. Precious few Republicans are willing to publicly support carbon taxing, even in revenue-neutral form. Either climate pales beside real issues like immigration, family-friendly tax reform and foreign policy (Douthat & Salam), or we can cure it, somehow, without resorting to carbon taxes (Faison).

What about the Republican rank-and-file? Evan Lehmann of ClimateWire was at the GOP convention and he spoke about climate with some 51 GOP delegates. Here’s how he distilled their responses:

A Texas delegate tilted his hat back when asked about climate change and said, “Ew.” A delegate from Florida lamented his party’s inaction on warming. And one from Wyoming claims it’s a conspiracy to hide the government’s involvement in the spread of a damaging beetle.

The bad, the good, and the ugly, you might say. (That beetle infestation, by the way, which is devastating lodgepole pines throughout the Rockies, is itself largely a result of climate change.) Not exactly the stuff of a party steeling itself for taxing carbon emissions  — or taking any concerted action on climate.

We could also cite the failure of even a single House Republican to vote against the Scalise Amendment denouncing a carbon tax. And that was in June, after any of them might have had to fear a primary challenge for veering from party orthodoxy.

Their rationale could be Koch Brothers money, or resentment of scientific elites, or, as writer Rebecca Solnit has suggested, an “ideology of isolation” that militates against grasping the interconnectedness at the heart of ecological thinking. Another factor, hinted at by former GOP House member Nan Hayworth in an interview with the Guardian this week, is that Republicans, having ceded the climate issue to Democrats, are now loath to be identified with it:

My former colleagues understand the importance of protecting the environment, but one of the problems is the political opposition from environmental groups and the left is so extreme in some cases, even when they try to move towards environmental points of view they get no credit for it politically.

Really? Republicans would get no political credit for backing effective climate action? With head-spinners like that, it’s hard to disagree with the suggestion last week by veteran Times columnist Tom Friedman that “the best thing that could happen to America [is] that Donald Trump is not just defeated, but is crushed at the polls.”

Friedman was envisioning a “sweeping victory” in which the Democrats not only keep the White House but retake Congress, giving them “a chance to put in place a revenue-neutral carbon tax” without needing a single GOP vote. Whether November goes that way is anybody’s guess, but today’s Republican Party is so tied up in anti-climate knots that it’s hard to see a bipartisan path to the only policy that can drive down emissions fast and far.