“Carbon and other greenhouse gases should be taxed at a rate high enough to spur the transition away from fossil fuels consistent with the temperature goals agreed to in Paris in 2015.”

That’s the carbon tax resolution that environmental activist Bill McKibben pressed the Democratic Party Platform Drafting Committee to adopt at its meeting in St. Louis last week. The proposal lost 7-6, as did allied resolutions opposing fracking and investments in fossil fuel infrastructure. Still, the vote is the latest step by carbon taxing on its march into the political mainstream. 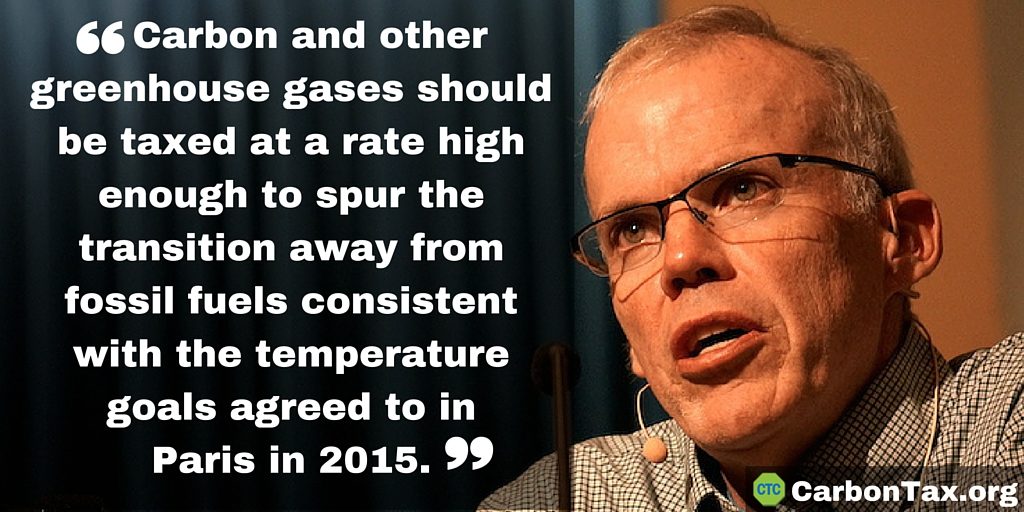 Befitting McKibben’s gift for concision, the resolution was scarcely longer than a tweet. But it spoke volumes: carbon emissions must be taxed; ditto, other greenhouse gases like methane; and the tax must be high enough to catalyze an energy revolution. Note also what the resolution did not say: that carbon should be “priced,” an expression that, though useful in its place, can be a weasel word allowing for cap-and-trade schemes. No, the proposal specified a carbon tax, straight up and robust.

Two Congressmembers on the panel were equally unambiguous:

Those are pretty sophisticated arguments. Less so was this objection from Hillary Clinton surrogate Carol Browner:

If it’s measurable reductions Browner wanted, she could have cast her eye at British Columbia, where a “starter” carbon tax of just $20 per ton of CO2 cut emissions in its first four years, although those cuts have stalled out, predictably enough, as the tax level stopped rising.

And anyone with a basic grounding in economic policy analysis will see right through Browner’s argument. Those hypothetical “companies [that] will simply pay the cost” of high-carbon energy won’t be around for long; they’ll be supplanted by enterprises that can provide electricity, manufacturing and transport more cheaply because they’ve heeded the carbon price signal and switched from dirty energy to untaxed clean fuels and efficiency. Households and businesses will also adopt sustainable practices that gain cost-effectiveness as the carbon tax takes hold.

Read our follow-up post, Time for Climate Advocates to Move Beyond the Clean Power Plan.

Bizarrely, Browner based her canard about carbon taxes — that they generate revenue rather than cutting carbon — in part on the failure of California’s cap-and-trade system. Presumably, Browner, a prime Democratic Party environmental apparatchik for over two decades, knows better. One can only imagine McKibben’s frustration as he saw carbon taxes tarred with the cap-and-trade brush.

Needless to say, Bill isn’t backing down, as he made clear in his post-mortem in Politico calling out the Clinton campaign for “obstructing change” by locking up the Democratic Party platform. While we’re sad that the carbon tax resolution didn’t pass, we’re pleased that McKibben not only drafted but fought hard for it.

Carbon tax proponents have long seen the logic in having Bill advocate for carbon taxes. Taxing carbon pollution jibes perfectly with the agenda of 350.org, the organization he has built into a formidable global grassroots force. No other policy tool both undermines the profitability of the fossil fuel industry and also leverages divestment (financially and culturally) from that sector.

McKibben’s leadership for carbon taxing in St. Louis — and, hopefully, beyond — is both heartening and important.

Analee Graig, an undergrad at SUNY-Binghamton, contributed reporting to this post.