“Arguably negligible.” That’s the Congressional Research Service’s bleak assessment of the direct impact on emissions of the Regional Greenhouse Gas Initiative (RGGI), six years on. RGGI, launched in January 2009 by nine northeastern states, is the first greenhouse gas cap-and-trade system in the U.S. It covers CO2 emissions from the 168 electric power plants 25 MW or greater in those states. 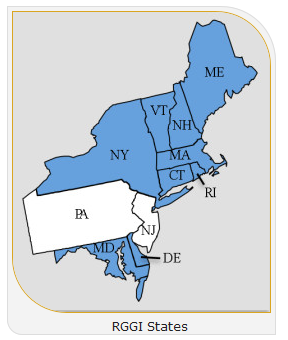 CRS’s report, “The Regional Greenhouse Gas Initiative: Lessons Learned and Issues for Congress” (July 2015), updates its comprehensive 2013 study of RGGI and offers a cautionary tale to federal policymakers and states considering cap-and-trade systems. The report could hardly be more timely, issued just a month before EPA finalized its Clean Power Plan which some analysts suggest opens the door to a national network of linked state cap-and-trade systems. As if fulfilling that prophesy, last Friday Governor Cuomo announced that New York State will “explore the possibility” of linking RGGI with California’s cap-and-trade system, envisioning a “North American market” where emissions allowances are bought and sold across the United States as well as in Canada.

Yet RGGI hasn’t induced a robust enough carbon price to drive down emissions, primarily because the initial emissions “cap” was set 45% higher than actual emissions by the covered power plants and wasn’t tightened enough to actually “bind” until four years later. Fortunately, RGGI’s design built in a “price floor,” a minimum price for each “allowance” (or pollution permit), which made the system function like a very low carbon tax of $2 per ton of CO2 until 2013. 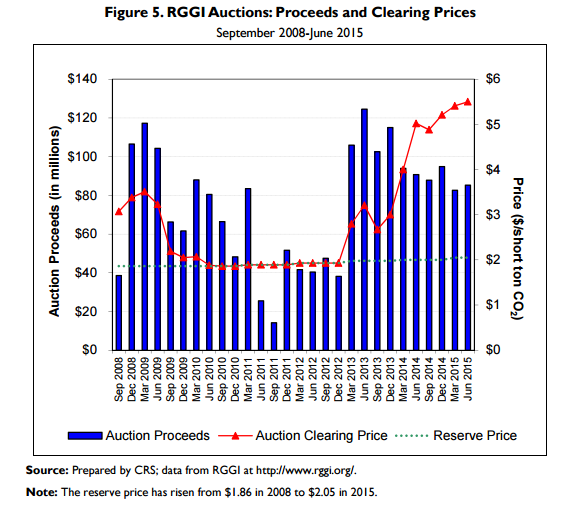 Allowance auctions (mostly at the floor price) have generated about $2.2 billion in cumulative revenue, two thirds of which has been allocated to energy efficiency, greenhouse gas abatement, renewable energy support and electricity bill assistance. While RGGI didn’t induce enough of a price signal to directly reduce emissions at the covered power plants, the activities funded by auction revenue did offer benefits including “emission reduction, consumer savings via lower electricity bills, and job creation,” according to CRS. The report did not quantify or even verify those benefits, however.

RGGI currently limits offsets to 3.3% of a pollution source’s allowances ― less than California’s cap-and-trade program. This limits potential damage to the integrity of the emissions cap from illegitimate offsets. At any rate, CRS found that no offset projects had yet been funded under RGGI, presumably because they have been uneconomical at RGGI’s low allowance prices.

If RGGI is the “pilot” project for linked cap-and-trade systems, the lessons are clear: build in a substantial price floor, limit and scrutinize offsets, and carefully manage the auction revenue. And here’s a lesson CRS didn’t articulate: a simple, predictably-rising carbon tax could accomplish more with far fewer administrative hassles than linked cap-and-trade systems.