If any climate legislation could garner at least nominal bipartisan support, it might be Rep. John Delaney’s Tax Pollution, Not Profits Act. Delaney is in his second term representing Maryland’s 6th CD, which runs from the DC suburbs to the western end of the state. His proposal, introduced on Earth Day at the American Enterprise Institute in Washington, would tax carbon dioxide and CO2 equivalents from methane and other sources at a rate of $30 per metric ton, increasing annually at 4% above inflation. The measure includes border tax adjustments to protect energy-intensive domestic industry from unfair competition from nations that haven’t enacted carbon taxes. 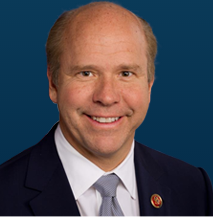 Delaney’s measure offers a sweetener to conservatives: a promise to apply roughly half of carbon tax revenues to reduce the top corporate income tax rate from 35% to 28%. The bill would also provide monthly payments to low- and middle-income households and fund job training, early retirement and health care benefits for coal workers. At least as critically, at the AEI unveiling, Delaney committed near-apostasy by suggesting that his carbon tax could substitute for the Obama administration’s Clean Power Plan, final regulations for which EPA issued last month.

The Carbon Tax Center assessed the Delaney proposal’s effectiveness using our 7-sector model. We project that in its third full year the measure’s $30 price would reduce U.S. CO2 emissions to 8% below emissions in the year before enactment. Unfortunately, its schedule of 4% annual real rises is too tepid to continue reducing emissions more than fractionally over the longer term. The low upward price trajectory is a shortcoming shared by the American Opportunity Carbon Fee Act, introduced by Senators Sheldon Whitehouse (D-RI) and Brian Schatz (D-HI) in June.

In contrast, carbon tax proposals introduced in this Congress by Rep. John Larson (D-CT) and Rep. James McDermott (D-WA) would rise briskly to exceed $100 per metric ton within a decade, which we estimate would reduce U.S. emissions below this year’s levels by more than one-fourth in that time (and by nearly a third below 2005 emissions).

In an online discussion forum hosted by OurEnergyPolicy.org, Rep. Delaney asked for comments on his proposal. Below, we group and summarize those comments.

“[A] meaningful, economy wide carbon tax would obviate the need for many if not all greenhouse gas regulatory options. A carbon tax would deliver more cost-effective and efficient emission reductions and promote innovation more effectively than the Clean Air Act regulatory authority, as well as avoid some of the potential legal and political pitfalls and administrative costs of regulations. Exchanging regulatory authority for a carbon tax could also improve the political viability of taxing carbon dioxide emissions.

[Rep. Delaney’s proposal] could open the way for conservatives to enact a host of policies they already support… [W]ith a carbon tax, we can remove EPA’s regulatory authority to use the CAA for climate policy and eliminate the expensive, invasive and sprawling CPP… The Renewable Fuel Standard is an enormous market intrusion that does a better job of supporting corn prices than reducing greenhouse gas emissions. CAFE standards for the automotive fleet are prescriptive intrusions into the automotive market that limit consumers’ ability to purchase larger, less-efficient vehicles; a carbon price could achieve those same emissions reductions without eliminating consumer choice.

Tax incentives and subsidies also should be on the table. We spend tens of billions of dollars a year subsidizing energy sources across the board. If our aim is a diverse, lower-carbon electric supply, we can eliminate those expenditures. Loan guarantees intended to help companies commercialize technology… would be inexcusable under a carbon-tax regime. The research and development juggernaut at DOE can be pointed to significant and meaningful advancement in energy technology, not incremental improvements in proven and commercialized technologies.

George Frampton, President of the Partnership for Responsible Growth noted that:

[In contrast to] carbon pricing schemes such as “cap-and-trade markets” or “carbon auctions,” [t]he certainty [of] a carbon fee… could encourage businesses to invest in cleaner energy and energy efficiency measures [and would be] more effective [than] a purely regulatory approach, such as the EPA Clean Power Plan.

Donald Marron, who served on President George W. Bush’s Council of Economic Advisers and is now Director of Economic Policy Initiatives at the Urban Institute, observed:

A carbon tax is regressive, imposing higher burdens, relative to income, on lower-income households than on upper-income ones. Some relief for those least able to pay is appropriate, and could easily be provided through refundable tax credits… By raising energy costs, a carbon tax will likely slow economic activity. Using some revenue to offset that drag, such as by lowering other taxes, would also make sense. Cuts to corporate income taxes, which can reduce incentives to invest domestically, appear to be an effective way to do so.

Policymakers thus face a tradeoff in selecting among [revenue] recycling options. Policies that do the most to help low- and moderate-income households, such as tax credits, do the least to offset the macroeconomic drag of raising energy costs. Policies that do the most to encourage growth, such as cutting the corporate tax rate, provide the biggest gains to upper-income taxpayers and offset only part of the carbon tax burden on low-income households. Congressman Delaney’s proposal charts a middle course, devoting substantial revenue to each approach.

Aparna Mathur, Resident Scholar at the American Enterprise Institute, agreed with Marron about the trade-off between fairness and efficiency:

[T]he most economically efficient recycling benefits poor households (who pay very little in taxes) proportionately less than rich households (who pay much more in taxes). Thus, there is an intrinsic tradeoff between optimizing the macroeconomic effects of the tax reform and making it distributionally neutral or progressive.

On revenue, Catrina Rorke staked out the conservative position:

Conservatives must insist on true revenue neutrality. Carbon policy and its resulting revenue should not be used to grow the size of government. Economists agree that cuts to existing, inefficient taxes, like the corporate income tax, will do the most to stimulate the economy at the same time that carbon policy increases energy prices. Back-of-the-envelope calculations suggest that, by imposing a relatively modest carbon tax and taxing capital gains and dividends as income, we could eliminate the corporate income tax completely.

3) The climate effectiveness of modest carbon taxes was also debated by commenters.

David Kreutzer of the Heritage Foundation repeated his oft-stated assertion that any politically viable carbon tax “will have a trivial impact even if matched by the rest of the developed world.” And if the tax is set high enough to be effective, “the developing world is very likely to balk.”

$30/ton is not a bad start – but with a total impact of under 30 cents per gallon of gasoline and 3 cents per kWh of electricity, it falls within the existing range of… differences in seasonal prices, state utility rates, state gas taxes, etc. [P]rices would have to be very large to override barriers and other effects, which would impose needless economic pain across broad markets with diluted effects on carbon emissions. [O]ur models find long-term price elasticity effects for the electricity sector to be in the .25 range, meaning that to get usage to fall 25%, prices have to rise 100%. This only strengthens the argument for targeted policies [such as energy efficiency programs] that cost less per unit of impact.

But William Eacho, co-founder of the Partnership for Responsible Growth, expressed the confidence of virtually all economists that a price signal will spur energy innovation and efficiency:

New technologies will surface once incentives are in place to develop them. The entire electrical grid is built on assumptions of older approaches to energy generation and distribution. As we properly cost the use of fossil fuels, to reflect their true external costs, renewables will grow in use and prices for renewables will continue to drop. Generation may be far more distributed, closer to consumption. The use of storage batteries will grow, which will address intermittency. Nuclear will become more cost competitive… the market will respond, once we start pricing carbon appropriately and stop subsidizing it to make it appear cheaper than it really is.

And Paul Werbos, the National Science Foundation’s Program Director for Energy, Power and Adaptive Systems, suggested that carbon taxes (and rebates) should be extended to the agricultural sector:

The main benefit of a reasonable carbon tax would be to incentivize… carbon capture and reuse (CCRS) and sequestration of carbon in the agricultural sector; it would be very important and not so hard to do what USDA and the ag[riculture] committees were calling for in 2009, to institute a USDA system for measuring carbon in the soil at the request and expense of a group of farmers, and to pay them for increasing carbon in the soil, at the same $30/ton-CO2 rate or at least a healthy fraction of that.

Jane Twitmyer of CACW/Watts added concerns about non-climate costs of fossil fuels that would justify a substantial carbon price:

Rising atmospheric carbon dioxide concentrations are making the oceans more acidic and impacting marine ecosystems and fisheries… In addition to the potential global warming devastation… [the unpriced cost of fossil fuels] include[s] the health effect of particulates; mercury… the risks created by the extraction and transportation of coal and natural gas including the toxic coal residue from burning coal… as well as the earthquakes… caused by reinjecting, deep into the earth, fracking’s flow-back fluids. Real energy security for the US will be achieved by dramatically reducing demand through efficiency, on-site generation and battery technology.

Rep. Delaney’s “Tax Pollution, Not Profits Act” garnered strongly positive comments from a fairly broad range of advocates and analysts. Several agreed with Delaney’s suggestion to replace more costly and less effective policies with a carbon tax. The use of carbon tax revenue remains contentious, but economists commended Delaney’s “middle course” proposal which would devote roughly half the revenue to compensate low- and middle-income households while using the remaining revenue to cut distortionary taxes and spur economic growth.

Some commenters suggested that by itself, the Tax Pollution, Not Profits Act would fall short of the price signal needed to induce a broad, clean energy transformation. The Carbon Tax Center’s modeling supports this concern, primarily because of the proposal’s modest 4% annual increase in carbon prices. But if Rep. Delaney’s proposal were modified to include a more aggressive upward price trajectory, it could offer a promising route to a stable global climate.