Notwithstanding the hype in the New York Times — “the strongest action ever taken in the United States to combat climate change,” “an aggressive plan to sharply limit greenhouse gases” — the final version of the US EPA “Clean Power Plan” being released today at the White House by President Obama actually constitutes a marked slowdown in reductions in electricity-sector emissions. 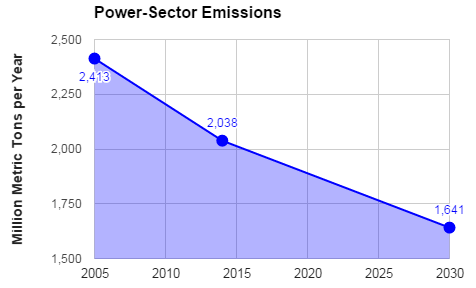 It is probably true that we’re not likely to see a repeat of two factors that contributed to the 2005-2014 reduction in power-sector emissions — the long and deep recession that began in 2007-2008, and the advent of cheap fracked methane that grabbed market share from higher-polluting coal-fired generation. But two other emissions-reducing phenomena remain in full swing: ongoing cost reductions in carbon-free wind and solar photovoltaic power, and the harnessing of both digital tech and new business models to boost energy efficiency in buildings, appliances and businesses.

In this light, it seems premature, if not downright bizarre, to bestow “legacy status” on a plan that targets just one sector (albeit a key one), and that settles for cutting emissions in that sector at a lesser pace than the rate at which they’ve already been falling for a decade.