Editor’s note: Yesterday the world’s most influential newspaper finally did what CTC and other carbon tax proponents have sought for years: publish a ringing endorsement of a U.S. carbon tax. With its editorial, The Case for a Carbon Tax, the New York Times joins the growing community of opinion leaders, policy experts and, yes, elected officials who not only recognize the power of carbon taxes to quickly and equitably reduce emissions but also sense the emergence of a political critical mass that can enact fees into law. This heartening development signals that it’s not too soon to focus on the design of a U.S. carbon tax, especially its magnitude and rate of increase, as CTC senior policy analyst James Handley does in this post.

Which is the more effective way to set a tax on carbon pollution?

A. Start aggressively, then raise the rate slowly (“sprint”).

B. Start modestly, then raise the rate briskly and predictably (“marathon”).

You probably guessed that if the goal is to instill incentives that will bring about big emission reductions fast enough to avoid runaway global warming, the answer is B, the marathon. Yet a leading U.S. Senate advocate of legislative action on climate seems to be starting off like a sprinter, perhaps because his legislation is pegged to estimates of the Social Cost of Carbon that don’t account for the possibility that climate change will turn out to be catastrophically costly.

More on that senator in a moment — after this tutorial: 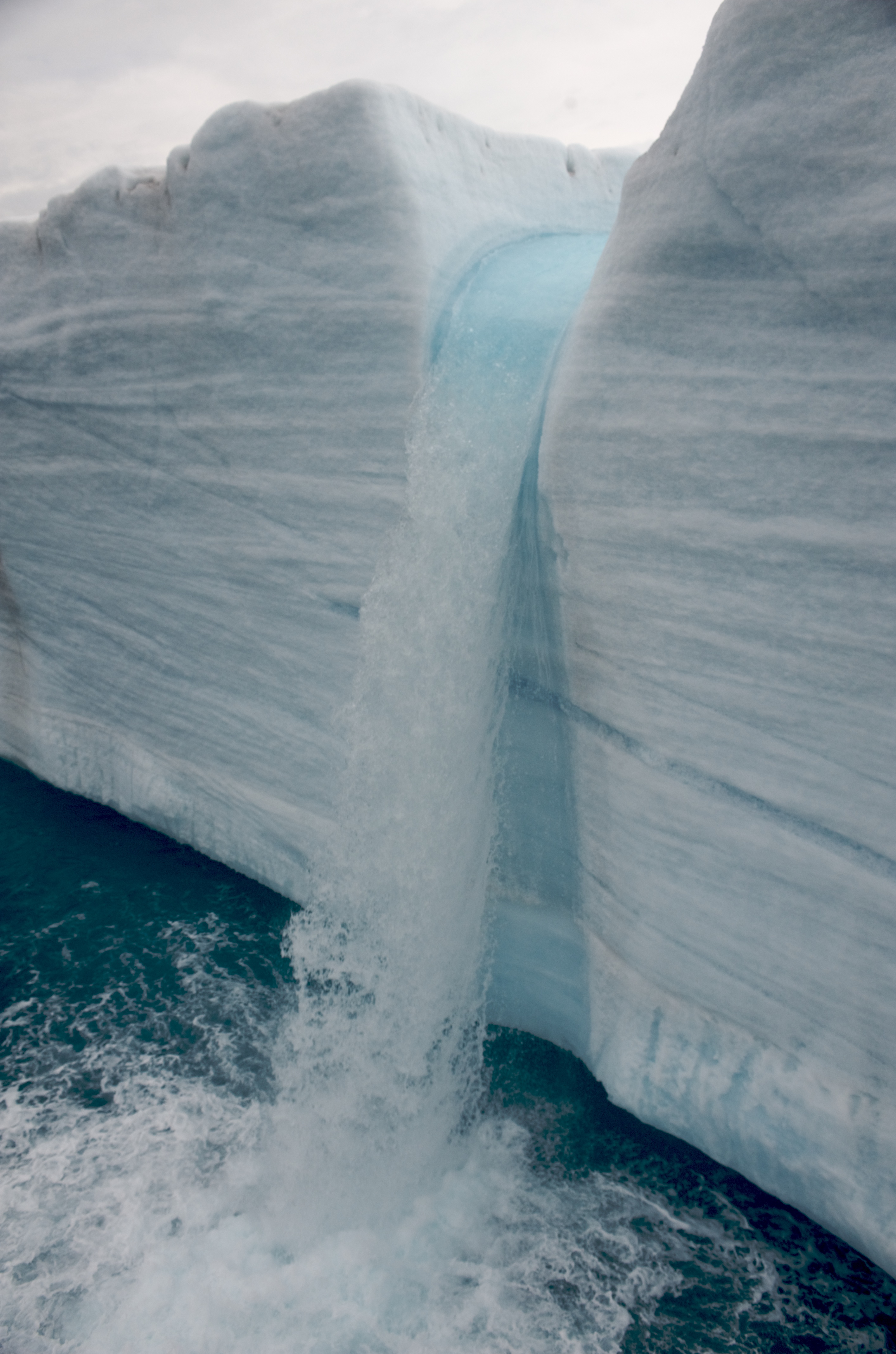 Calculating the damage from a ton of CO2 turns on a host of assumptions that span wide ranges. Not surprisingly, estimates of the SCC reported in the peer-reviewed economics literature range from as little as $10 per ton of CO2 to over $400. A profoundly important modeling choice is how heavily to weigh the risks of climate-induced catastrophes. High-risk climate scenarios with nearly infinite costs, such as rapid release of methane from arctic permafrost or sudden sliding of vast ice masses into the ocean, “misbehave” in the equations used for conventional cost-benefit analysis, leading some modelers to omit them altogether.

One widely-used model assumes that economic growth rates will not be affected by climate change, thereby predicting that half of the world’s economic activity would continue after a whopping 18 degrees C of global warming. Other models dilute the high-risk scenarios by assigning them arbitrarily low probabilities that suppress their impact when their costs are averaged in with low-risk scenarios. A further problem in estimating the SCC is the bias toward high “discount rates” that telescope future impacts down to seemingly manageable proportions.

Amidst fraught debate and widely-divergent estimates, the Interagency Working Group has settled on $42 per ton of CO2 as the “official” U.S. government social cost of carbon. While that’s an improvement over past practice that omitted climate costs entirely — tacitly, an SCC equal to zero — the $42 figure grossly understates the large-scale global risks that dominate concern over global warming and climate change.

And even if there were a “perfectly” specified SCC that accounted for catastrophic risks, it would still make for a problematic framework for setting a carbon tax. Indeed, there are practical, real-world reasons for the carbon tax to start below the SCC — to allow households and businesses at least a little time to adjust to higher fossil fuel costs — but to soon rise to meet or even exceed the SCC, in order to counterbalance institutional barriers that prevent societies from responding to price signals fully and instantly.

A U.S. carbon tax should thus not be tethered to the IWG’s “central” SCC estimate. Instead, it should set a price and upward trajectory that can slash domestic emissions and serve as a template for other countries — as does Rep. Jim McDermott’s “Managed Carbon Price Act.” Starting at $12.50 per metric ton of CO2 (equivalent to $11.34 per U.S. ton), the McDermott carbon tax would rise by that same amount each year to reach triple digits before the decade is out — a trajectory that would drive down U.S. emissions by about one third in that time, according to CTC’s carbon tax model. And if global climate negotiators shift from squabbling over emissions caps to a price-based negotiation, as Harvard economist Martin Weitzman urges, a similar global price trajectory would slow emissions fast enough to offer a decent shot at avoiding runaway warming.

Which takes us to Senator Sheldon Whitehouse (D-RI). This Wednesday (June 10), Sen. Whitehouse is to present his proposal for an economy-wide tax on greenhouse gases, the American Opportunity Carbon Fee Act (AOCFA), to the American Enterprise Institute. When Senator Whitehouse unveiled his bill last November, we applauded its broad coverage of all major greenhouse gases and its WTO-oriented border tax adjustment provisions. Presenting the proposal at AEI, a leading GOP and business-oriented think-tank, is a smart play for bipartisan support. The Senator’s willingness to discuss an array of options for use of the carbon tax revenue is a helpful invitation to his colleagues of both parties to fold carbon taxes into broader tax and regulatory reform.

But we would be remiss if we did not examine the bill’s effectiveness at reducing catastrophic climate risks. AOCFA’s pollution fee is pegged to U.S. EPA’s estimate of the SCC. The price would thus begin relatively high, at $42 per ton of carbon dioxide, but then rise by just 2% annually in real (after-inflation) terms. In our estimation, this trajectory could be the worst of both worlds. 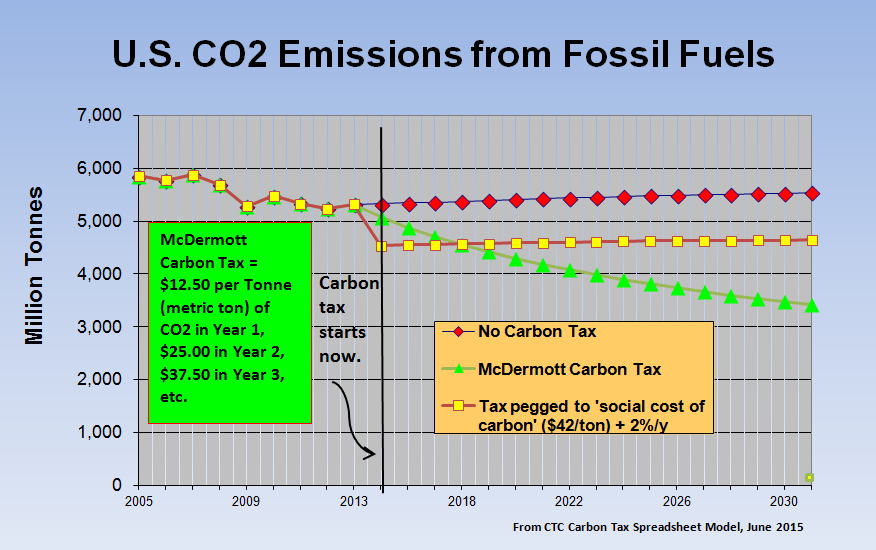 On the one hand, the overnight step from a zero carbon price all the way to $42 will hit hard. A $42 price per ton of CO2 equates to more than 4 cents per kWh for a 100% coal-dependent electric utility. In states like West Virginia, Kentucky and Missouri, where retail electricity prices average just 8₵/kWh (and industries and buildings are organized around cheap power), rates would rise more than 50 percent overnight. Without time to find and install low-carbon substitutes as well as more efficient processes and products, a sudden increase of this magnitude would be received as a punishment rather than a low-carbon incentive. The political pushback would be immense.

Moreover, we fear that without a persistent upward price trend, the climate benefits of AOCFA’s relatively high initial price will peter out. Our carbon tax spreadsheet model predicts that after an initial rapid 15% drop due to the bill’s aggressive starting price, CO2 emissions would rise on account of increased affluence and the rise in energy demand that tends to accompany it in the absence of continuing price incentives.

We’re feeling a bit of cognitive dissonance. We’re encouraged that Senator Whitehouse — in many ways the Senate’s outspoken climate “conscience” – is championing a simple, explicit carbon tax as the key policy to avert climate catastrophe. But while we admire his proposal’s elegant overall architecture, we’re concerned that the aspect of a carbon tax that matters most — its scale — is oddly miscalibrated.