Arctic Oil vs. Carbon Tax? It’s Not Even Close.

It is true that the stroke of the presidential pen with which Barack Obama last week granted Shell Oil Corp. permission to drill off Alaska’s Arctic Coast cannot also put into force a U.S. carbon tax, without authorization by Congress. And it is all too possible that when climate reality eventually sweeps over the Capitol, the resulting carbon tax may be modest in scale and take a lot longer than a decade to reach the $100/ton level that would drive massive reductions in fossil fuel use and CO2 emissions.

All the same, it’s instructive to compare the capacity of Arctic drilling to supply oil with that of a robust carbon tax to quench the need for it. The outcome — the carbon tax wins — may not surprise. But the lopsidedness is startling: in just its tenth year, the carbon tax proposed last November by Rep. Jim McDermott (D-WA), starting at $12.50 per metric ton of carbon dioxide and rising annually by $12.50 as well, would be eliminating the need for oil at around a dozen times the rate at which Shell would be pulling the stuff from the Arctic. 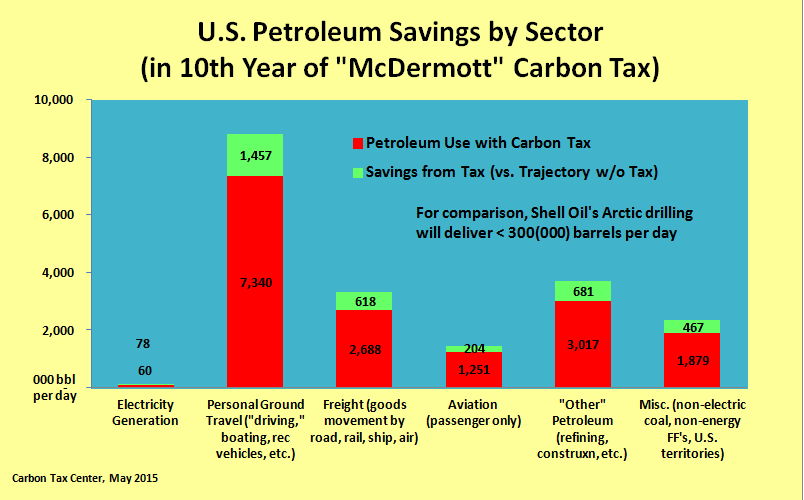 Here are the numbers:

♦ Royal Dutch Shell’s Chukchi Sea project is projected by the U.S. Bureau of Ocean Energy Management to extract 4.3 billion barrels of crude over a 44-year period. (See Chukchi Sea Oil & Gas Lease Sale 193 Draft Second Supplemental Environmental Impact Statement, Volume 1 [pdf]; go to pp. 6 or 62 or 182 of 694.) This equates to daily production of 268,000 barrels. An estimated 2.2 trillion cubic feet of methane (natural gas) would be extracted as well; on a btu basis that equates to 360 million barrels of oil, or 23,000 barrels a day. Combined extraction of hydrocarbons is then around 290,000 barrels a day. (Note that we have not netted the energy expended to “discover,” extract and transport the oil.)

♦ For the carbon tax, we modeled McDermott’s Managed Carbon Price Act of 2014, setting the annual increases as the midpoint between the bill’s floor and ceiling prices. The price per U.S. (not metric) ton of CO2 in the tenth year, 2024, is $113.40. (Our model, which we’ll update soon, had the tax starting in 2015.) As indicated in the graph, the reductions in petroleum requirements would be substantial in every consuming sector. They sum to 3,486,000 barrels a day — 12 times the 290,000 bpd equivalent anticipated from Shell’s Arctic venture.

The estimated oil savings from the McDermott carbon tax amount to nearly one-fifth of U.S. oil consumption in both 2013 (the last data year in our model) and 2024 projected without a national carbon price. The biggest reduction in absolute terms is in what we call personal ground travel (chiefly driving), which dominates petroleum use. But on a proportional basis the savings would be greater in commercial sectors such as freight movement, oil refining, and construction, as the unmistakable price signal from the annually rising tax drives innovation enabling lower usage.

Still, the projected reduction in gasoline consumption for personal ground travel in 2024, 1.4 to 1.5 million barrels per day, commands attention. Can adding a mere $1.15 to the price of a gallon of gasoline — that’s the estimated per-gallon consumer impact of a $113.40/ton carbon tax — bring about a 17 percent shrinkage in gasoline use vis-à-vis business-as-usual consumption?

First, unlike CAFÉ standards, which affect only the mileage efficiency of new vehicles, a rise in the price of gasoline touches every factor bearing on demand for the fuel: how often and far vehicles are driven, how mindfully (or not) they are driven, which vehicle goes on the road vs. which stays parked, and which vehicles are purchased — not to mention designed, manufactured and marketed. But that’s not all. Expectations of higher gasoline prices will impinge on long-term decisions made in purchasing homes, siting new facilities and designing communities, bending the outcomes toward energy-efficient proximity and away from energy-dependent sprawl. 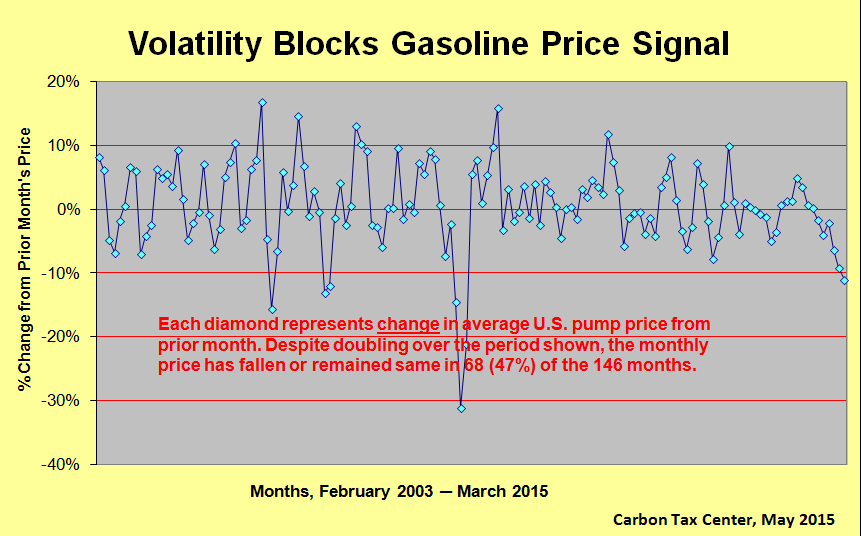 Price signal gets lost when monthly price falls nearly as often as it rises.

Second, the predictability of the price rises can offset and even neutralize some of the price volatility that historically has obscured the long-term trend toward higher gasoline prices. As the graphic (from my downloadable gasoline price-and-use spreadsheet) indicates, over the past dozen years prices at the pump have fallen month to month nearly as often as they’ve risen. This has bred fatalism among consumers and blunted what might otherwise have become a stampede toward vehicle technologies and designs that can move people with ever less gasoline. A steadily rising carbon tax can counteract that.

To be sure, these qualitative arguments don’t prove that a McDermott-like carbon tax will remove three to four million barrels a day of petroleum demand from the U.S. economy. However, they do suggest that it could trigger a cascade of mutually reinforcing changes in the societal structures that determine our energy use, leading to the impressive reductions indicated in our model.

“Shell No” activists aren’t just fighting for climate. May 2015 photo by Greenpeace.

Current politics keeps the comparison posed here in the realm of the hypothetical. Nevertheless it’s unsettling that one stroke of the pen portends so much damage for so little oil, when another could, under a different politics, prevent that damage many times over.

What should be clear is that a robust carbon tax won’t merely aid the climate. By systematically dismantling so-called “demand” for fuels, a carbon tax will protect earth’s fragile habitats, landscapes and communities.