[T]he quantity-based Kyoto-type approach [to UN climate negotiations] has pretty much broken down, leaving the world with a highly non-optimal patchwork of sporadic regional volunteerism that does not address centrally how to correct the critical externality of global warming.  — Harvard economist Martin Weitzman. 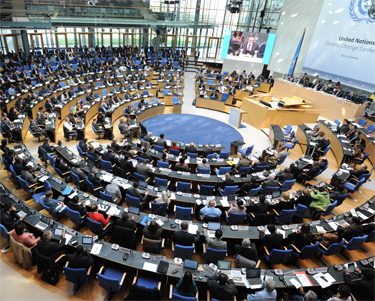 Which is simpler: negotiating one price, or 190 emissions caps?

The Kyoto Protocol is broken. What can replace it? Professor Weitzman, considered one of the world’s most influential economists, proposes a game change: Instead of squabbling over the quantity of fossil fuels each nation may burn, negotiate a single carbon price all can adhere to.

Weitzman is best known for modelling the economics of catastrophic climate change. In a ground-breaking 2009 paper, he demonstrated that conventional cost-benefit analysis under-weights the risk of catastrophic scenarios. In two new papers, he scrutinizes the Kyoto Protocol’s quantity-based structure through the lens of game theory. He calls Kyoto’s attempt to set and divvy up a global emissions cap “the ultimate… top-down worldwide treaty.” That’s not a compliment. Observing that Kyoto hasn’t come close to its goal of “an internationally harmonized binding system of emissions caps,” Weitzman shows why: the Kyoto framework induces each nation to game the system by attempting to maximize the efforts required of others while minimizing its own.

1. It should induce cost-effective emissions reductions.

2. It should allow negotiators to focus on negotiating one central and highly salient parameter.

3. It should align negotiators’ incentives toward internalizing climate costs.

On the first criterion, Weitzman points out that while a carbon tax is more easily administered and more transparent than a cap-and-trade system, a carbon cap or a tax can both achieve cost-effective emissions reductions.

On the second, Weitzman builds on Nobel-laureate Thomas Schelling’s pioneering game theory analysis establishing the importance of a clear focal point in negotiations. Kyoto’s quantity-based approach assigning different binding emissions quotas to each nation has no focal point. In contrast, a price-based negotiation offers a single focal point for all parties.

And building on the seminal work of Ronald Coase, Weitzman stresses the importance of minimizing transactions costs. Coase showed that parties that might otherwise negotiate an agreement can be deterred by the high costs of getting to yes. Weitzman points out that any quantity-based structure such as Kyoto necessarily multiplies transaction costs: “It is easier to negotiate one price than n quantities — especially when the one price can be interpreted as ‘fair’ in terms of equality of effort,” he writes.

The bulk of Weitzman’s analysis focuses on his third and most important criterion: the need to negotiate a structure that counteracts parties’ national self-interests and aligns their incentives toward reducing emissions. He writes:

This ‘countervailing force’ property is inherently built into a price-based harmonized system of emissions charges, but it is absent from a quantity-based international cap-and-trade system… A Kyoto-type quantity-based international system fails because no one has an incentive to internalize the externality and everyone has the self-interested incentive to free ride. What remains is essentially an erratic pattern of altruistic individual volunteerism that is far from a socially optimal resolution of the problem.

An internationally harmonized domestically collected carbon price is different. If the price were imposed on me alone, I would wish it to be as low as possible so as to limit my abatement costs. But when the price is uniformly imposed, it embodies a countervailing force that internalizes the externality for me. Countervailing my desire for the price to be low (in order to limit my abatement costs) is my desire for the price to be high so that other nations will restrict their emissions, thereby increasing my benefit from worldwide total carbon abatement. A binding uniform price of carbon emissions has a built-in self-enforcing mechanism that countervails free riding.

To illustrate, Weitzman hypothesizes a World Climate Assembly in which each nation gets a population-weighted vote for its desired level of a universal carbon price, and each nation gets to keep its carbon-price revenue (generated either by a tax or by auctioning permits under a cap). In this model, a nation with a typical (average) per-capita carbon intensity has no incentives for free-riding. The reason: “Each agent’s extra cost from a higher international emissions price is counterbalanced by that agent’s extra benefit from inducing all other agents to simultaneously lower their emissions via the higher international price.”

Of course, nations with above-average carbon intensities will have an incentive to keep the carbon price low. But that will be at least partially offset by their governments’ retention of carbon revenue, enabling them to mitigate the economic losses to high-carbon industries and households. Weitzman contrasts the clarity of negotiating an explicit price-based structure that internalizes revenue to each nation with the daunting complexity of negotiating a globalized, linked cap-and-trade system with unpredictable and opaque cross-border revenue flows.

Recent experiments by behavioral economist Axel Ockenfels at the University of Cologne appear to validate Weitzman’s mathematical assertions. Ockenfels has found that when negotiators know that all parties will be required to meet the same price level, they opt for a price that balances their self-interest in minimizing effort against the benefits they will receive from the other parties’ efforts. These negotiators weren’t free-riding any more, they were negotiating toward a socially-optimal price for the carbon externality.

As the UN prepares for its twenty-first round of negotiations under the Kyoto Protocol in December, we hope participants will heed Professor Weitzman’s clarion call for a simplifying and incentive-aligning “game change” to a price-based negotiation as a path out of climate deadlock.