Why do Copenhageners ride bicycles? The key reason, says Yale economist and best-selling author (“Irrational Exuberance”) Robert J. Shiller, is that Danes are idealists who resolved, after the oil crisis of the 1970s, “to make a personal commitment to ride bicycles rather than drive, out of moral principle, even if that was inconvenient for them.”

“The sight of so many others riding bikes motivated the city’s inhabitants and appears to have improved the moral atmosphere enough,” Shiller wrote in yesterday’s New York Times, that the share of working inhabitants of Copenhagen who bike has reached 50 percent. 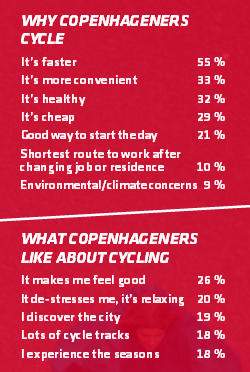 From “Copenhagen: City of Cyclists” (2010), a report by the City of Copenhagen.

In much the same way, Shiller argues, “asking people to volunteer to save our climate by taking many small, individual actions” may be a more effective way to bring down carbon emissions than trying to enact overarching national or global policies such as carbon emission caps or taxes.

Goodness. Rarely do smart people so badly mangle both the historical record and basic economics. I say “people” because Shiller attributes his column’s main points to a new book, “Climate Shock: The Economic Consequences of a Hotter Planet” by Gernot Wagner of the Environmental Defense Fund and Martin L. Weitzman, a Harvard economist. And I say “smart” because the three stand at the top of their profession. Shiller won the Economics Nobel in 2013, Weitzman is a leading light in the economics of climate change, and Wagner is highly regarded young economist.

But mangle they have (I haven’t seen the Wagner-Weitzman book but assume that Shiller represents it fairly).

Let’s start with the history, which is fairly well known to anyone versed in cycling advocacy, as I’ve been since the 1980s, when I spearheaded the revival of New York City’s bike-advocacy group Transportation Alternatives (as recounted here.) Copenhagen’s 40-year bicycle upsurge, and indeed much of the uptake of cycling across Denmark, Germany and the Netherlands, came about not through mass idealism but from deliberate public policies to help cities avoid the damages of pervasive automobile use while reducing oil dependence.

If idealism played a part at the outset it was a social idealism that instructed government to undertake integrated policies ­― stiff gas taxes and car ownership fees; generously funded public transit; elimination of free curbside parking; provision of safe and abundant bicycle routes ― that enabled Copenhageners to do what they evidently desired all along: to use bikes safely and naturally.

The telltale is in the graphic. Only one in eleven Copenhageners who cycle have environment and climate in mind. The majority do it because it’s faster than other ways to travel, and around a third of cyclists say they ride because it’s healthy, inexpensive and convenient ― belying Shiller’s meme of Danes idealistically choosing bikes despite their inconvenience vis-à-vis cars.

The mangling of economics, meanwhile, is baked into the very idea of “Putting Idealism to Work on Climate Change,” as Shiller titled his article. Expecting more than a small fraction of humanity to place ideals above convenience and economy has to qualify as magical thinking under current social and economic arrangements. Market failures simply won’t allow it. Unpriced externalities, whereby carbon emitters get to pollute for free, in effect make it expensive to move off fossil fuels. The prevalence of free riders, whereby your emissions reductions benefit me and every other person as much as yourself, is a further disincentive.

Shiller touched on externalities and free riders, but only in passing. Perhaps they didn’t fit his narrative centered on Wagner and Weitzman’s “Copenhagen Theory of Change, [by which] we should be asking people to volunteer to save our climate by taking many small, individual actions.”

One wonders if any of the three economists studied the actual evolution of cycling in Copenhagen before coining that term. Did they talk with Copenhagen officials, who might have cautioned them that the individual’s decision to cycle depends on social constructions such as elaborate and continuous bike lane networks, ample and convenient bike parking, and a traffic justice system that holds reckless drivers accountable, and who could have explained that bicycle infrastructure works best in conjunction with policies to raise the price of urban driving closer to its social cost? Did they learn that the citizenry has to clamor for these measures to neutralize the inevitable opposition from car-owners and auto interests?

Concerning climate, recognition appears to be growing, if slowly, that carbon pricing, ideally delivered through transparent and robustly rising carbon taxes, is essential to correct the market failures that Shiller mentioned. The individual actions Shiller touts are important. I practice them and I constantly beseech everyone around me to try and do the same. But even more important are collective policies, like carbon taxing, that can make those individual actions possible and natural. That’s the only way our and other societies will succeed at pushing out carbon-emitting fossil fuels in favor of renewable energy and efficient use.

Big thanks for assistance on this post to Jon Orcutt, who as senior policy advisor to DOT Commissioner Janette Sadik-Khan engineered the extraordinary expansion of NYC’s bicycle infrastructure during 2007-2014.