One Cheer for the Guardian’s Divestment Campaign

The worldwide fossil fuel divestment campaign got a huge boost this week when Guardian editor Alan Rusbridger boldly thrust his paper into the fray. Britain’s most respected newspaper is urging readers to sign a petition by 350.org demanding that the Gates Foundation and the Wellcome Charitable Trust divest from the world’s top 200 fossil fuel companies within five years. 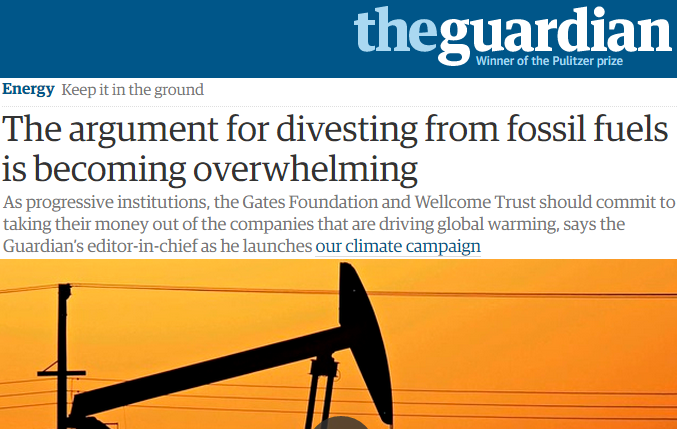 Combined, the two charities manage over $70 billion in assets. Both say they consider climate change a  serious threat. But last year the Gates Foundation invested at least $1 billion of its holdings in 35 of the top 200 carbon reserve companies, while the Wellcome Trust invested $834 million in fuel-industry mainstays Shell, BP, Schlumberger, Rio Tinto and BHP Billiton.

We’re both elated and concerned by Rusbridger’s audacious move. Elated that this distinguished and brave journalist has thrown down the gauntlet to the global fossil fuel industry. But concerned that this divestment campaign may raise false hopes.

As Matthew Yglesias articulated last year in a thoughtful piece on Slate, divestment by socially responsible investors, universities and even governments won’t starve capital flows to fossil fuel corporations anytime soon. That’s because in a global market, every share of stock we activists dutifully unload will be snatched up in milliseconds by some trader who can bank on humanity’s continued dependence on fossil fuels to continue generating profits.

South Africa’s historic divestment campaign — the one that helped topple Apartheid and enshrined divestment as a tool against oppression  — was paired with a UN-sponsored boycott of South African goods. Not just aiming at the supply of capital but destroying the demand for goods sheared the Apartheid regime’s economic lifeline to the rest of the world more than either policy could have done alone.

No, we’re not suggesting a global boycott of fossil fuels. Rather, we point to the Guardian’s campaign to reiterate that the best and maybe only broadly effective way to reduce fossil fuel demand (which is the point of a boycott) is with a carbon tax. Economists agree on that policy prescription just as strongly as climate scientists agree on the diagnosis. And national-level carbon taxes can be designed to draw our or any nation’s global trading partners into carbon taxing, which means that a move by a big economy to impose a carbon tax will trigger a wave of followers.

So by all means, divest. The cultural and perhaps political opprobrium that divestment can spark is long overdue for the fossil fuels industry. But let’s not assume that divestment alone will break the chains of fossil fuel dependence. Even with the Guardian’s welcome campaign, the world still needs a transparent price on carbon pollution to strangle demand for fossil fuels by replacing them with non-carbon alternatives.