Today’s welcome announcement of a surprise U.S.-China agreement to curb greenhouse gas emissions almost certainly commits the United States to a national carbon price. Non-pricing measures, such as the EPA Clean Power Plan to cut power plant emissions and the ramp-up of auto fuel economy standards now underway, won’t be nearly enough by themselves to meet the new U.S. target of 25% lower emissions by 2025 vis-a-vis a 2005 baseline, according to calculations by the Carbon Tax Center.

This could be terrific news for carbon tax proponents, since it would finally require climate-concerned organizations and officials to put carbon pricing — preferably in the form of a revenue-neutral carbon tax — at the heart of their climate agenda. On the other hand, given the new Congressional ascendancy of the climate-deaf Republican Party, the 25% target could prove to be just another climate goal scuttled by U.S. political resistance.

Let’s start with the carbon emission numbers, which we’ve broken down between emissions from electricity generation, which account for around 40% of U.S. CO2 pollution, and emissions from the various “non-electric” sectors like automobiles, goods movement, air travel, industry and heating, which account for the other 60%. This division is useful for at least two reasons: there’s much greater maneuverability in electricity due to the relative ease of substituting clean sources like solar and wind for dirty coal and gas, and the U.S. already has an emissions goal for the electricity sector: the 30% reduction by 2030 (from 2005) embodied in the Clean Power Plan announced by President Obama this past June. 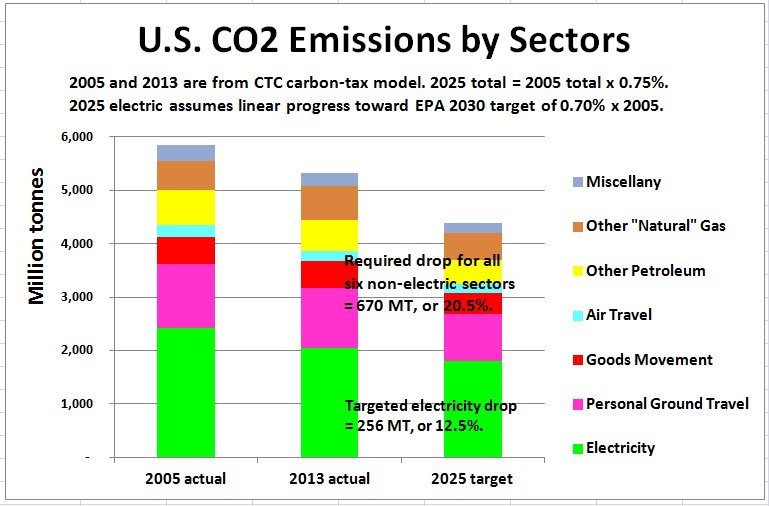 Non-electric-sector emissions will need to drop sharply to meet the 25% 2005-2025 reduction goal.

The key numbers are shown in the graphic. A 2025 target equaling 75% of actual 2005 CO2 emissions of 5,855 million tonnes (metric tons) from all U.S. sources equates to 4,391 million tonnes. With that figure established, let’s switch our reference frame to current (2013) emissions, which were 5,317 million tonnes. (All figures are from CTC’s carbon tax model, and some may differ from recently released official U.S. emission figures, but only slightly.)

That’s a strikingly ambitious target — at least in relative terms. On a percentage basis from 2013, non-electric emissions would have to drop by 20.5%, whereas electric emissions must drop only 12.5%. This is a stark reversal of the prevailing view (which we at CTC share) that the electricity sector continues to have more low-hanging fruit because of the relative ease of replacing high-carbon supplies with low-carbon sources.

To be sure, there’s no intrinsic reason the electricity sector couldn’t surpass the EPA target and thus take at least some of the pressure off the other sectors. Indeed, with solar-cell prices continuing to fall and PV technology and finance finally mainstreaming, optimism is rampant about the capacity of renewables to displace coal- and eventually gas-fired generation. Still, solar’s share of U.S. electricity supply is so small — it reached an average of 0.4% for the first half of this year (wind power’s share also reached a milestone, 5%) — that the ramp-up would need to be nearly miraculous to surpass the EPA power-sector reduction target of 30% for 2005-2030 without a boost from carbon-emissions pricing.

The other caveat to our calculations is that the U.S. commitment appears to be for “greenhouse gases” and thus may allow methane and other GHG’s to assume some of the percentage load we’re numerically assigning to CO2 alone. On the other hand, some reports are saying that the U.S. commitment is to a 26% or even 28% overall reduction, which would probably require 25% cuts in the CO2 component.

Our inference, then, is that the U.S.-China agreement actually commits the United States to do something unprecedented: to cut non-electricity emissions of carbon dioxide so substantially that a carbon-emissions price will have to be part of the underlying policy package. After all, in the eight years from 2005 to 2013 — a period marked by little (just 10.4%) GDP growth — those emissions fell just 5.1%; but now, over the next twelve years, non-electric emissions will have to fall by 20.5%, or four times as much.

The ongoing phase-in of higher auto mileage via stronger CAFE standards can only be a part of that, given that automobiles (including “light trucks”) account for just a third of those non-electric-sector emissions (see graphic). The lion’s share of the accelerated reductions will therefore have to come about not via regulatory mandates alone but through economy-wide shifts permeating American society and involving less driving, fewer freight-miles, greater re-use, higher efficiencies in buildings, machinery and appliances, and even the emergence of a national conservation ethic.

That’s a lovely vision, and a tall order. In our view, there’s no way it can happen without a national carbon price — delivered via a transparent and relatively tamper-proof tax on CO2 emissions.