Free dumping of CO2 pollution into the atmosphere is nothing less than “theft” from future generations who stand to suffer from unabated global warming, declared University of Chicago economist Steve Cicala at a symposium last week in honor of the conservative icon Milton Friedman. “It is theft,” said Cicala. “That’s a loaded term, but if someone else has a better term for taking something from someone without their consent and without compensating them, I’d be happy to hear it.”

E&E News reports that Cicala and former Obama White House adviser Michael Greenstone, who holds the Friedman chair at the U. of Chicago and directs its Energy Policy Institute, asserted that “if the late free-market economist Milton Friedman were alive today, he’d probably support pricing carbon.” 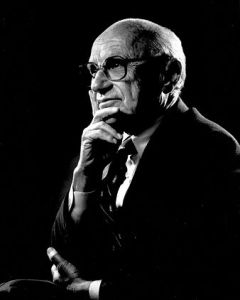 According to E&E, Cicala and Greenstone argued that,

Friedman… would have viewed climate change as a negative externality associated with burning fossil fuels and would have believed that society was entitled to recover its losses from those who emit carbon to advance their economic interests… While there is a market for the products that are associated with greenhouse gas emissions — like electricity, fuel and steel — there is no market for the pollution inflicted by their manufacturers on the public.

[t]he panel was moderated by former Rep. Bob Inglis (R-S.C.), whose stance on climate change contributed to his 2010 loss in the Republican primary. He now heads the Energy and Enterprise Initiative at George Mason University. Inglis, who still describes himself as a conservative, argues that his colleagues on the right would be more receptive to the issue of climate change if there were a conservative policy model to address it. His initiative proposes a revenue-neutral carbon tax, which would return all the revenue from a levy on emissions to the public in the form of other tax cuts.

Panelists at the Oct. 8 symposium, held at the university where Friedman taught for more than three decades, stressed the importance of U.S. leadership on climate policy. They also recommended that a carbon tax include border adjustments to create incentives for other nations to adopt their own carbon pricing systems and to protect domestic energy-intensive industry from unfair competition.

Inglis isn’t the only Republican recommending carbon taxes. According to E&E,

In a June 21 New York Times op-ed, Paulson urged revenue-neutral carbon taxes to address what he described as an emerging “carbon bubble”of fossil fuel assets that, he argued, are over-valued because the dire consequences of burning them may lead to restrictions on their extraction and use.