One Cheer for a New “Cap-and-Dividend” Bill

If you believe that the best policy for cutting U.S. carbon emissions — and the easiest political sell — is “cap-and-dividend,” you’re loving a NY Times op-ed keyed to a bill being introduced today by Rep. Chris Van Hollen (D-MD).

Van Hollen’s Healthy Climate and Family Security Act of 2014 would (i) create a permit system covering CO2 emissions for all fossil fuels extracted or brought into the U.S., (ii) auction off permits equaling U.S. emissions in 2005, (iii) ratchet down the number of permits by 80% by 2050, and (iv) distribute all of the proceeds “to the American people as equal dividends for every woman, man and child,” according to the op-ed, entitled The Carbon Dividend. 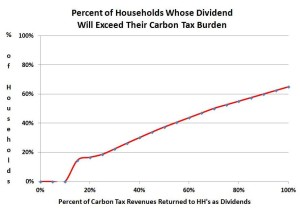 A bill structured like that is fairly ambitious, and it’s good to see it submitted to Congress alongside the McDermott Managed Carbon Price Act of 2014 introduced two months ago on May 28. (Our write-up of the McDermott bill is here.) And the Times op-ed, by U-Mass economics professor James Boyce, is written with unusual grace and persuasiveness, especially at the start:

From the scorched earth of climate debates a bold idea is rising — one that just might succeed in breaking the nation’s current political impasse on reducing carbon emissions. That’s because it would bring tangible gains for American families here and now.

A major obstacle to climate policy in the United States has been the perception that the government is telling us how to live today in the name of those who will live tomorrow. Present-day pain for future gain is never an easy sell. And many Americans have a deep aversion to anything that smells like bigger government.

What if we could find a way to put more money in the pockets of families and less carbon in the atmosphere without expanding government? If the combination sounds too good to be true, read on.

That’s terrific writing, and smartly keyed to the compelling theme that climate policy need not be sacrificial or a greased path to so-called big government.

But the op-ed raises a handful of cautionary flags worth attending to:

First, why debut the cap with enough permits to cover 2005-level emissions? U.S. CO2 emissions are now (2013) 9 percent less than in 2005. (See CTC’s carbon-tax spreadsheet model [Excel download], Summary tab, Cell Q121.) Auctioning 10 percent more permits than would have been needed last year would virtually guarantee anemic permit prices that won’t spark carbon-reducing investment and won’t deliver the kinds of dividends the public will be counting on. (Addendum: The bill is now available (pdf) on Rep. Van Hollen’s Web site, and on p. 6 specifies that year-2016 permits will be 10% less than 2005 emissions, largely vitiating this concern.)

Second, the op-ed is silent as to how the Van Hollen bill will handle permit trading. This question goes to the paradox at the heart of cap-based systems: without trading, the market signals will be cordoned into a thousand separate sectors, without the fluidity needed to engender the lowest-cost array of carbon-reducing investments and behaviors; but trading invites the magicians of high finance to game the system with complex derivatives that will destabilize and hide the price of permits, impeding the intended long-term investments in renewables and efficiency.

Third — and this is an issue with the op-ed rather than the bill per se — Prof. Boyce’s promise that “more than 80 percent of American households would come out ahead financially” may not withstand close scrutiny. As skewed as U.S. wealth, spending and energy consumption are toward the upper echelons, it’s unlikely that so much fossil fuel use is purchased by the top quintile that the dividend checks going to everyone in the bottom four quintiles will exceed their passed-through higher carbon costs. (My best estimate, shown graphically here, is that around 65% of households will come out ahead financially under a 100%-dividend system with either a carbon cap or tax.)

Fourth, the op-ed took this gratuitous swipe at a carbon tax:

Unlike a carbon tax, which brings in more revenue for the government, Mr. Van Hollen’s bill is, in effect, a tax cut.

Ouch. That one sentence undercuts work by carbon-tax advocates to educate policymakers and the public that a carbon tax, like a cap, can be revenue-neutral via either “tax swaps” that phase out existing federal taxes like payroll taxes as the carbon tax revenue is phased in, or the same dividend approach embodied in the Van Hollen bill. Any tax, including one on carbon pollution, need not be a revenue-raiser for bigger government (or even for deficit reduction). Indeed, the choice of pricing mechanism (permits or fees) and the choice of revenue treatment (dividend, tax swap, or revenue-raiser) are independent of each other.

To spell it out: A tax or fee can have (or not have) a dividend as easily as can a cap. And the magnitude of the dividend will be a good deal more predictable and steady under a fee-and-dividend system than with cap-and-dividend, thus guaranteeing a stronger version of the compact with American households that Boyce rightly touts (“The tighter the cap, the bigger the dividend. Voters not only would want to keep the policy in place for the duration of the clean energy transition, they would want to strengthen it.”)

Finally, there’s a larger question as to the political salience of cap-based federal climate legislation. The Van Hollen bill seems curiously stuck in 2009-2010, when the Big Green groups were pushing furiously for cap-and-trade in the form of the Waxman-Markey bill. With the lords of Wall Street no longer valorized, and with the opacity of cap-based systems now seen as a drawback instead of an asset, many carbon-pricing advocates have moved on. Sentiment is coalescing around a carbon tax, especially the fee-and-dividend approach supported by the fast-growing Citizens Climate Lobby and embodied in the McDermott bill noted earlier.