Next to Nothing for Climate in Obama Plan

The Environmental Protection Agency will unveil a draft proposal on Monday to cut carbon pollution from the nation’s power plants 30 percent from 2005 levels by 2030, according to people briefed on the plan. The proposed rule amounts to one of the strongest actions ever taken by the United States government to fight climate change. (emphasis added)

That’s this morning’s breaking news on President Obama’s climate action plan, from NY Times national energy-climate correspondent Coral Davenport. Yet peel back the numbers and the plan turns out to be precious little.

Relative to 2030 emissions projected from current trends, the drop in that year’s U.S. CO2 emissions sought by the President is a painfully modest 355 million tonnes (metric tons). That equates to just 7% of total actual emissions from all sources last year (5313 million tonnes). 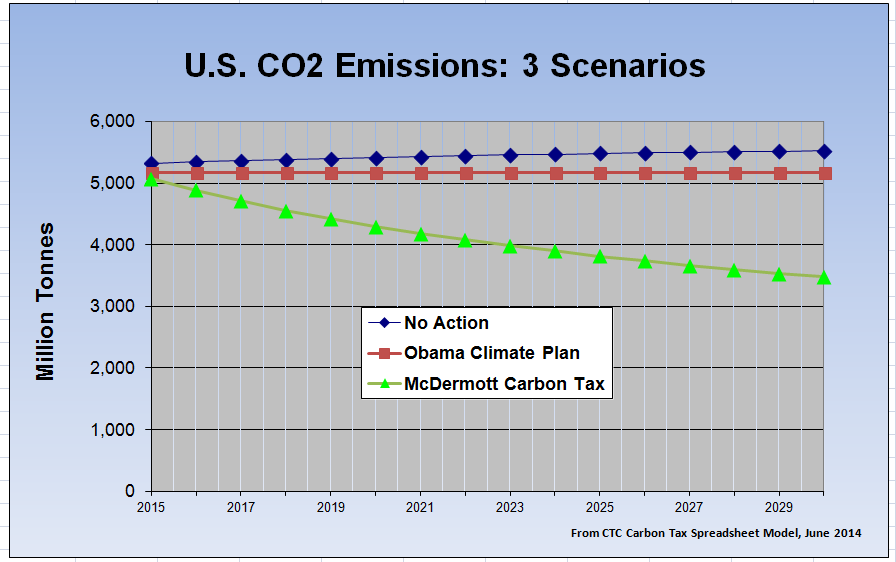 To be sure, the business-as-usual (no action) trajectory producing that 355 million tonne figure is mine, not the administration’s. (At the time I wrote this the White House hadn’t translated its percentage target into metric tons of CO2.)

I derive it below, and it’s subject to argument. What’s not debatable is that power plants are the low-hanging fruit in cutting CO2. That’s because electricity-sector emissions can be cut relatively easily not just via the demand side (through energy efficiency and conservation) but also on the supply side (by converting from coal to gas, and from coal and gas to renewables). Indeed, as of last year, demand and supply steps by industry, household and government had already wrought a 15% reduction in U.S. power plant emissions from the president’s 2005 base year (a drop of 361 million tonnes from 2414 million). By calling for only a second round of 15% cuts (355 million tonnes) from 2014 to 2030, the Obama plan in effect takes twice as long (16 years) to cut as much carbon pollution as the country just did (in 8 years, from 2005 to 2013).

Here’s another way to see how undersized a CO2 cut 355 million tonnes is: in a different political universe, one in which a carbon tax could be made the economic engine for cutting CO2, that same reduction (355 million tonnes) could be effectuated through almost the tiniest carbon tax imaginable: a carbon pollution fee starting in 2015 at $2.15 per ton of CO2 and rising by $2.15/ton each year to reach $34.40 by 2030, and applied only to the electricity sector (i.e., ignoring the other 61% of U.S. CO2 that comes from cars, trucks, planes, refineries, factories, heating, mining, etc., as the Obama plan does). Equivalently, an economy-wide carbon tax of just a buck and a quarter per ton of CO2 (rising by the same $1.25 each year so it reaches an even $20 in 2030) would also do the CO2-cutting job of the Obama plan. (These tax rates are derivable with my newly updated carbon tax, which you can download here.)

So when the NY Times calls the Obama plan one of the strongest U.S. government actions ever taken on climate, that’s a sign of how low the bar has been set by our country’s history of inaction.

What to do? Two things.

First, lean on the environmental lobby to stop caving to the White House. We need prominent advocates like NRDC and EDF to insist on more. Yes, it can be difficult to talk tough to the President when even halting steps like today’s are viciously attacked by the dirty-energy lobby. But heaping praise on a policy to cut emissions just 7% over 16 years doesn’t square with treating global warming like the planetary emergency it is.

Second, get behind a carbon tax — a real one, like the $12.50/tonneCO2 tax (starting at that rate and rising annually at the same rate) that Rep. Jim McDermott (D-WA) is readying for introduction this week. Our modeling indicates that in its tenth year, the McDermott carbon tax (which equates to $11.34 per conventional “short” ton of CO2), would reduce U.S. CO2 emissions by a third from 2005 levels, and by nearly 30% from future emissions without the tax. (By 2030, the reductions would be 41% from 2005 and 37% from business-as-usual.) The local chapter of the Citizens Climate Lobby is an excellent vehicle for political action for this or other robust carbon taxes.

Like you, we know full well that a measure like McDermott’s can’t and won’t make it through this Congress, and perhaps the next, even though it could be folded into comprehensive tax reform, spurring economic growth by shifting tax burdens off work and investment and onto climate pollution. But seven percent won’t do. A robust carbon tax like McDermott’s is more essential than ever.

Electricity-sector CO2 emissions in 2030 under “business-as-usual”: These depend on two parameters — electricity sales (which determine) generation; and the CO2 “content” of an average kWh generated. I estimated future electricity sales using AEO (that’s the US Energy Information Administration’s Annual Energy Outlook) forecasts of GDP growth and electricity rates, which I processed through assumed elasticities of 0.5 for income and (negative) 0.7 for price. For CO2 content, I assumed an annual decline in CO2/kWh of 1.0%, which is half of the average 2.0% “decarbonization” rate experienced in 2005-2013. As noted or implied above, U.S. electricity-sector emissions were 2414 million tonnes of CO2 in 2005 and 2053 million in 2013. A 30% cut in the former figure (the President’s goal) is 724 million tonnes, implying a 2030 target of 2414 less 724, or 1690 million tonnes. My modeling implies business-as-usual year-2030 emissions of 2045 million tonnes (coincidentally, almost identical to actual 2013 emissions). Reducing that to 1690 million tonnes requires a relative cut of 355 million tonnes, which is just 6.7% of actual year-2013 total U.S. emissions of 5313 million tonnes. For sources, more details and all calculations, see the Electricity “tab” of my carbon tax spreadsheet model.