Is The New York Times Missing The Decade’s Most Affirmative Climate-and-Energy Story?

Alone among the major economies, Germany is moving purposefully to phase out fossil fuels while also shuttering nuclear power. Germany’s energy makeover, or “energiewende,” appears to be thriving, as evidenced by the country’s humming economy, low unemployment, robust exports, stable or declining CO2 emissions, and rapid uptake of renewables. Yet the world’s most influential newspaper casts this ambitious program as an incipient failure, even as elsewhere it decries the climate stalemate in Washington. 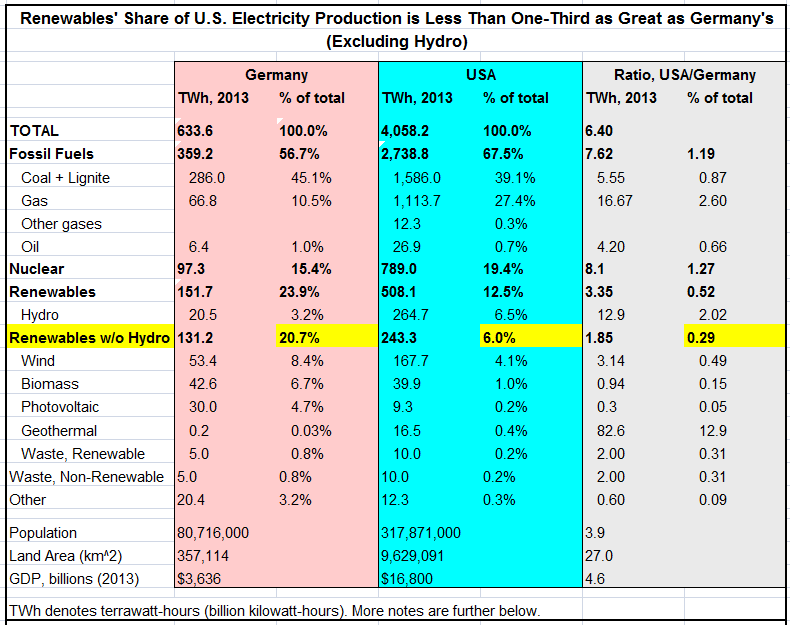 Here are ten packets of information worth bearing in mind as you sift through coverage in “the paper of record” of Germany’s transformative energy agenda.

1. The German economy is the world’s fourth largest ― after the United States, China and Japan. Of the three dozen highest-population countries, Germany boasts the highest per capita GDP, save for the U.S.

2. Germany has embarked upon a concerted program to transform its energy system from fossil fuels to renewable sources ― wind power, electricity from sunlight, and biological-based fuels. This energy makeover — energiewende, in German — is not an overnight phenomenon but the accumulation of a dozen synergistic laws and policy directives instituted over several decades. The energiewende is now reaching critical mass, such that last year over 20% of German-produced electricity was generated from renewable sources, not even counting traditional hydro-electricity: wind, 8.4%; biomass, 6.7%; photovoltaics, 4.7%; municipal waste, 0.8% (an additional 3.2% was from water power) ― more than triple the comparable percentage for the U.S. (see table), and the highest share by far of any major economy. Perhaps most notably, Germany, with cloudier skies, a more northerly location, and 1/27th the land area, produces more than three times as much photovoltaic electricity as the United States. PV’s share in Germany’s electricity generation mix is 20 times as large as that in the U.S.

3. The most powerful mechanism driving the energiewende has been a 1991 law guaranteeing an investable price for renewable-energy production through a policy known as Feed-in Tariffs (FiT). The intent of this law, as energy authority Hal Harvey noted in his 2013 brief on the energiewende, was not simply to provide more zero-carbon energy but to push renewable energies along their respective “technology learning curves” so that vast amounts of clean energy could become available at affordable prices in the future.

4. Although German authorities have reduced somewhat the rates offered for newer wind and solar production, the FiT’s have caused substantial rises in electricity prices. (Another factor is a tax on electricity, introduced in 2000 as part of ecological tax reform.) These price rises have been decried by some German industrialists as well as the American oil historian and energy consultant Daniel Yergin, whose recent report (available through this link) also took Germany to task for turning its back on the supposed cheap-energy bonanza offered by fracked natural gas. Nevertheless, Germany’s economy, by far Europe’s most robust, has weathered the long global recession better than any other Western country, including the U.S., with 5% job growth and nearly 5% real GDP growth from the end of 2007 to the end of 2013 (see graphs).

5. The Fifth Assessment Report of the Intergovernmental Panel on Climate Change, draft portions of which have emerged in recent weeks, is only the latest (if the most urgent) expert report to express the nearly unanimous view of the world’s leading climate scientists that failure to curb emissions of carbon dioxide, the major greenhouse gas and an automatic byproduct of fossil fuel use, consigns our planet to catastrophic climate change within the lifetimes of most people now living.

6. As if deaf to the drumbeat of such warnings over the past several decades, the world’s three largest economies are doubling down on long-standing policies that have entrenched carbon-based fossil fuels as the bulwark of their energy systems. Under a politically expedient but mutually cancelling “all of the above” rubric, the U.S. subsidizes virtually all energy production, whether from coal, oil and gas extraction or wind turbines; China, its burgeoning megacities encased in life-shortening smog, rocketed past the U.S. as the leading carbon emitter several years ago, while Japan remains mired in paralysis in the wake of the 2011 triple-reactor meltdown at Fukushima. 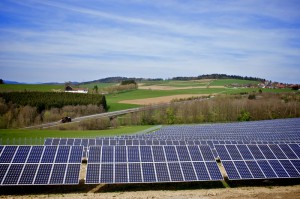 7. The chief economist for the European Climate Federation (ECF), Thomas Fricke, reports that German exports doubled from 2000 to 2012, evidence that comparatively high energy prices have not dampened Germany’s ability to compete in global manufacturing. In his new brief, Climate and Competitiveness, Fricke cites the low share of energy in German industry’s cost structure (in part because of high energy efficiency), and argues that “factors like highly qualified labor, or the benefits of being integrated into well-functioning clusters, probably play a more important role.” Even Germany’s net exports of electricity reached a new high last year of nearly 34 billion kilowatt-hours, the equivalent of five large (million-kilowatt) reactors running at 75% of capacity.

8. Nevertheless, these considerations did not deter energy consultant Yergin from telling a New York Times reporter last month that “There has been a kind of waking up to the fact that the premises of the Energiewende, however well-intentioned they are, no longer hold because the world has changed” ― the insinuation being that pursuing renewables rather than fracking was a luxury Germany could no longer afford. The Times story, ominously headlined German Energy Push Runs Into Problems, warned dutifully that “The rise in energy prices has already cost Germany $52 billion in net exports and could prove even more damaging if steps are not taken to keep prices in check, according to the [Yergin] study.”

9. The negative slant of the Times’ story was of a piece with the paper’s ongoing reportage. Enter “energiewende” in the Times’ search engine and here’s what comes up, in reverse chronological order:

As their headlines suggest, the articles are replete with negative comments such as “Germany’s plan to convert to renewable energy sources is running into problems in execution that are forcing Germans to face the costs” and “A year and a half later, the costs of that plan, known here as the Energiewende, or energy transformation, are becoming painfully clear.” Nowhere does the Times see fit to mention the dual service the energiewende provides to the world: helping contain emissions of greenhouse gases, and driving down the price of renewable energy worldwide by propelling wind and solar technologies further along Hal Harvey’s “technology learning curves.”

10. A related current running through the Times’ coverage is that Germany’s accelerated closure of nuclear power plants in the wake of the 2011 Fukushima meltdowns is causing a surge in carbon emissions through increased usage of existing coal generators and decisions to build new ones. But the new coal-fired plants were set in motion prior to Fukushima in order to replace older, obsolete ones; moreover, from 2010 to 2012 ― a period encompassing Fukushima and Germany’s shutdown of six reactors ― Germany actually held constant its use of fossil fuels to make electricity, as the loss in nuclear generation was made up by growth in solar-photovoltaic and wind generation and increased energy efficiency.

The Times is not alone in its simplistic coverage of the energiewende. See, for example, Sunny, Windy, Costly and Dirty in the Economist, earlier this year, and, just yesterday, in Bloomberg News, Coal Rises Vampire-Like As German Utilities Seek Survival. One expects better, though, from the paper that sets the tone for other outlets and whose coverage of coal-burning’s climate consequences and immediate health costs is often hard-hitting, as evidenced by the links to potent stories sprinkled through this post.

For an alternative model, the Times could turn to another Establishment redoubt, Foreign Affairs. In a compact (1,700 words) yet comprehensive report published last September, Power Hungry: Will Angela Merkel Complete Germany’s Energy Revolution?, Berlin-based writer Paul Hockenos chronicled the energiewende’s achievements without skimping on the challenges it poses, not just for Germany’s electric grid but for the whole of society.

“Germany’s switch to clean power is nothing less than a new industrial revolution,” Hockenos wrote, “which is forcing Germans to contemplate uncomfortable changes to their entire society, including everything from mobility to urban architecture to farming to finance.” Precisely. Weaning an advanced industrial economy off of fossil fuels and nuclear power goes way beyond just flipping a different switch. But Hockenos also credits the energiewende’s “booming industrial and service sector based on renewables,” the increased tax receipts, the development benefits to Germany’s lagging eastern sector, and the boost to exports — none of which has been fit to print in the Times.

Whether makeover, transformation, revolution, or all three, the energiewende is the most hopeful development in energy and climate policy this century. It, and our planet, deserve thoughtful coverage.

Electricity data for Germany are from Table 5 of file, Entwicklung der Energieversorgung 2013.pdf, provided by German Association of Energy and Water Industries (BDEW) except for these minor modifications aided by data from Christian Bantle of BDEW (email, 14-April-2014): (i) Geothermal is a nearly negligible 0.2 TWh; (ii) Municipal Waste (here labeled Waste) is split evenly between renewable and non-renewable; (iii) Other has been reduced from 25.4 TWh in BDEW’s Table 5 by 5 TWh of Waste Non-Renewable just noted. For those interested, Coal is 124.0 TWh and Lignite 162.0 TWh.

Electricity data for USA are from U.S. Energy Information Administration, Monthly Energy Review, March 2014, Table 7.2a: Electricity Net Generation,Total (All Sectors), except (i) Lignite is subsumed under Coal; (ii) Water (Hydro) Power has been netted by 4.424 TWh consumed by pumped-storage facilities; (iii) reported net electricity from Waste, 19.957 TWh, has been split evenly between renewable and non-renewable to match the German convention; (iv) Other has been added to true up calculated sum to reported Total.

Population, land area and GDP are from Wikipedia’s Lists of Countries (by population, by area, by GDP). Population is as of 30-Sept-2013 (Germany) and 15-April-2014 (USA). GDP is per International Monetary Fund.