This post, co-written with Alex Matthiessen and published in the Huffington Post over Thanksgiving (2013), is reproduced here with a handful of minor changes. Alex, a CTC board member, is president and founder of Blue Marble Project, Inc., an environmental consulting firm.

Small beer is perhaps too kind a term for the prosaic proposals being batted around by New York Governor Andrew M. Cuomo’s tax reform commission: close loopholes, broaden the base, modernize collection of property taxes, stop taxing retirement income. Little about restructuring taxes to help New York State businesses create new jobs and give hard-pressed working families a break. And nothing about tax reform that could establish New York as a leader in curbing climate change.

Yet one possible reform, a carbon tax swap, can do all of the above — and is already being used successfully in other countries. With whole sections of the Philippines in ruins from Typhoon Haiyan, and the Warsaw global climate talks ending in tatters, the governor’s tax commission needs to go long and put a carbon tax swap at the top of its pending report. 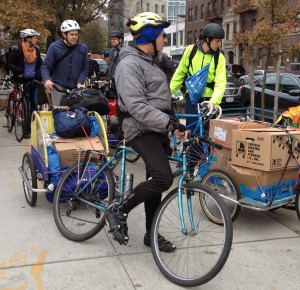 Albany wouldn’t keep a dime under the swap. Instead, taxes that stifle enterprise would be replaced by a fee on polluting fossil fuels that would motivate businesses and homeowners to accelerate the transition to clean energy.

One obvious candidate for tax relief is the state sales tax, which adds four cents onto each dollar spent on goods and services from Buffalo to Babylon. (Localities tack on another three to five cents.) NY State’s average combined rate, the country’s eighth highest, exerts a double drag on commerce, driving purchases — and businesses — out of state and cutting into households’ buying power.

A statewide carbon tax on oil, gas and coal used in vehicles, buildings, industry and power generation of $20 per ton of carbon dioxide — the equivalent of 19 cents per gallon of gasoline — would net $3.5 billion a year. With this revenue, legislators could reduce the state sales tax from 4 percent to 3 percent. Plus, there would still be $500 million to invest each year to finance storm-related infrastructure and help building-owners finance climate-friendly solar power systems.

Alternatively, the new revenue could pay down business taxes that place New York in the bottom 10 percent of Forbes‘ rankings of state business climates. Abolishing one such tax, the $2.7 billion corporation franchise tax, would give companies much-needed administrative and financial relief, and help attract businesses and jobs to New York.

Yes, the carbon tax will make electricity, gasoline and other fuels more expensive. That’s by design. But less-affluent families use less energy than average and thus will bear less of the burden. Meanwhile, upstate hydropower, which is carbon-free, will be exempt from the tax, offsetting many rural residents’ greater usage of gasoline and heating fuels. (New York City residents have smaller homes and drive less.) A reduction of the sales tax would disproportionately benefit lower-income family, thus mitigating further the impact of the swap on working families.

How much would a $20-per-ton carbon tax reduce New York’s emissions? Around 6 to 8 percent. While that’s barely a tenth of what most climate scientists believe must be the nationwide emissions-reduction target for 2050, it would constitute a strong start toward a 100 percent clean-energy economy for New York. It would also create a template that other states could follow, especially if, as some climate-policy specialists suggest, U.S. EPA lets states use carbon taxes to meet national carbon-pollution reduction standards.

A year ago, Hurricane Sandy made the devastating reality of climate change painfully clear to 20 million New Yorkers from Gov. Cuomo on down, as well as other Americans. Yet Congress has proven incapable of enacting even a single meaningful measure to mitigate it. On climate, as with marriage equality, the states will have to show the way.

Now the governor’s tax-reform push gives him the chance to provide national leadership on how states, with a single policy instrument, can start delivering both tax and climate relief to their people.

Click here for a 6-page brief backing up most of the tax-swap figures in this post. Go to CTC’s “States” Web page for info on how advocates in Oregon, Washington and elsewhere are working to advance state-level carbon taxes.