Why "Official" Nuke Plant Cost Estimates Are Like Campaign Promises

In my in-box are a dozen e-mails wanting my reaction to Eduardo Porter’s column in yesterday’s New York Times in which he insisted that of all non-carbon based energy sources, nuclear power is “the cheapest and most readily scalable.”

Whether my correspondents knew that in my former life I meticulously established the spectacular failure of nuclear power plants to stay on budget and produce affordable electricity, or they simply thought I might have a halfway informed opinion on reactors’ proper role in combating the climate crisis, I can’t say. But I dutifully opened up Porter’s column and was quickly appalled. 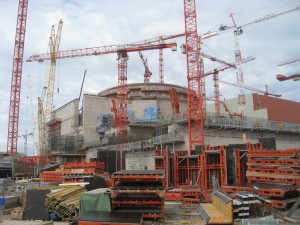 The column fails the single most critical precept in nuclear economics: don’t confuse promise with performance. I made this point in 1979, a month before the Three Mile Island reactor accident, in a review of a book that plumbed that very theme. I was struck with how the authors of Light Water: How the Nuclear Dream Dissolved — two business academics with experience in the American and French Atomic Energy Commissions — showed that from Day One nuclear power proponents mesmerized themselves with idealized cost estimates that ignored reactors’ innate complexities and razor-thin tolerances — twin Achilles Heels that time and again broke project budgets and sowed mistrust among policymakers and the public, especially in the U.S.

Things haven’t changed. In June, Porter’s colleague Matt Wald, who has covered the nuclear industry for the Times since the early eighties, reported on a nuclear plant under construction in Georgia named Vogtle — one of two reactor projects underway in the U.S. First, Wald summarized the disastrous cost escalation at predecessor projects 30 years ago:

In those decades parts of plants were built, ripped out and rebuilt because of design and regulatory problems, leading to ruinous costs. Examples sit across the muddy construction site: Vogtle 1 and 2, which opened in 1987 and 1989, cost $8.87 billion. When they were proposed in 1971 the estimated cost was $660 million.

Wald noted that the new project, Vogtle 3 and 4, had instituted cost-control measures to lock-in plant designs and also replace often-chaotic field assembly with prefabricated parts. But, he noted:

[T]he company that was supposed to be making prefabricated parts like clockwork, from a factory in Lake Charles, La., was shipping them with some parts missing or without required paperwork. Southern [Company, the reactor owner] built a cavernous “module assembly building,” 120 feet high and 300 feet long, where the parts were supposed to be welded together, largely by robots, into segments weighing thousands of tons. But shipments stopped last August and are still arriving too slowly.

“[I]t remained to be seen,” the Georgia state construction monitor told Wald, “whether modular construction would actually save time.” Meanwhile, 5,000 miles away from Vogtle and “stifling” U.S. regulations that for decades have been blamed for “suffocating” nuclear power here, an ambitious reactor project in Olkiluoto, Finland has run completely off the rails.

“The massive power plant under construction on muddy terrain on this Finnish island was supposed to be the showpiece of a nuclear renaissance,” the Times reported back in 2009. “The most powerful reactor ever built, its modular design was supposed to make it faster and cheaper to build. And it was supposed to be safer, too.”

Instead, the Times reported then, “after four years of construction and thousands of recorded defects and deficiencies, the price tag . . .  has climbed at least 50 percent.” That was just the beginning. By December 2012, three-and-a-half years after the Times article appeared, the cost of the Olkiluoto reactor had doubled again, according to Wikipedia, to 8.5 billion euro — nearly triple the original €3 billion delivery price. So calamitous is the cost spiral that the Finnish electric utility owner and the French reactor supplier are suing each other.

Why bring up Vogtle and Olkiluoto? Because they exemplify the real-world experience that Porter ignored. (They also constitute a majority of reactor construction now underway in the Western economies.) Instead, Porter hung his column on — you guessed it — paper cost estimates from the U.S. Energy Information Administration and the U.K. government. Here’s Porter’s faithful workup of nuclear vs. wind and solar, per EIA:

Take the Energy Information Agency’s [sic] estimate of the cost of generating power. The agency’s [sic] number-crunchers include everything from the initial investment to the cost of fuel and the expense to operate, maintain and decommission old plants. Its latest estimate, published earlier this year, suggests that power generated by a new-generation nuclear plant that entered service in 2018 would be $108.40 per megawatt-hour. . . This is not cheap. . . Still, nuclear power is likely to be cheaper than most power made with renewables. Land-based wind farms could generate power at a relatively low cost of $86.60 per MWh, but acceptable locations are growing increasingly scarce. Solar costs $144.30 per MWh, the agency estimates. A megawatt-hour of power fueled by an offshore wind farm costs a whopping $221.50.

Case closed, eh? $108.40 a MWh for nukes, $144.30 for solar, $221.50 for offshore wind? I’ll leave it to others to see if the EIA figures for renewables properly credit the still-ongoing declines in unit costs for photovoltaics and wind. My point here is that the nuclear numbers in Porter’s column overlooked not just Vogtle and Olkiluoto but the deep-seated problem that invariably leaves paper estimates of reactor costs bearing as little resemblance to the real thing as campaign promises bear to officials’ actual policies: the fabulous energy density that makes nuclear power so appealing in theory requires heroic countermeasures that demand degrees of perfection that are only achievable, if at all, through a punishing array of rules, regulations, paper trails, quality assurance, inspection, checking and double-checking that come at enormous cost.

I documented this in painstaking detail long ago in a book, Power Plant Cost Escalation, that took me several years to conceptualize and several more to quantify and compose and finally publish, in 1981. The book’s bottom line was that through the 1970s, costs of completed U.S. nuclear plants rose twice as fast as costs of completed coal-fired plants; while the higher costs at least paid for coal plants to become much cleaner but not for nuclear plants to be made any safer, judging by the steady drip of nuclear mishaps that culminated in the meltdown of the final nuclear plant in my database, Three Mile Island Unit 2. (The book is on-line here, as a 12MB pdf, or you can pick up a hard copy from me, cheap; send me an e-mail.)

This work went viral in the energy and business world of the time, giving me a good run as expert witness for state government agencies charged with representing utility consumers in electricity rate cases. Eventually I moved on — to bicycling advocacy, road traffic pricing, and, of course, carbon taxing. These days I mostly steer clear of nukes per se, and, indeed, of specific technologies, preferring to agitate to get the most-level playing field possible, via full-cost carbon pollution pricing.

The problems with Porter’s column don’t stop with his slavish adherence to paper estimates of reactor costs. He flogs Germany for its 0.9% bump in CO2 emissions last year (“even as they declined in the United States and most of Western Europe”), ignoring that German GDP grew relative to that of every other major European economy, and that the drop in U.S. CO2 was mostly due to the horrific (and possibly transitory) boom in fracked natural gas.

Indeed, from 2010 to 2012, a two-year period encompassing the March, 2011 Fukushima catastrophe and Germany’s subsequent decision to turn off 29% of its nuclear power production (reducing reactor output from 140.6 terrawatt-hours in 2010 to 99.5 TWh in 2012), Germany actually held constant its use of fossil fuels to make electricity.

How did German society make up for the 41.1 TWh drop in reactors’ electricity generation? Numerically, it was simple:

The institutional mechanisms are more complex and involve feed-in-tariffs and other mechanisms to elicit investment in renewables. (You can get the full scoop on how Germany turned off nearly 30% of its nuclear power without burning more fossil fuels from the excellent Energy Transition (The German Energiewende) blog run by Craig Morris at the Heinrich Boll Institute.)

Now that’s a story worth pursuing, and one I pitched to Porter in an e-mail the week before Labor Day. Perhaps my note was too gentle. In retrospect, I might have ripped a page from Nate Silver’s playbook and muttered a cautionary tale about the 2012 election pundits who went with discredited over robust poll data and predicted a Romney victory.