One day after 48 climate protesters were arrested at the White House and three days before what is billed as “the largest climate rally in history,” Senators Bernie Sanders (I-VT) and Barbara Boxer (D-CA) set a new “gold standard” for transparent, effective climate legislation. Their Climate Protection Act (“CPA”) would impose an upstream carbon pollution fee starting at $20 per ton of CO2, rising in ten years to $33/T, and would tax methane emissions at their CO2 climate equivalency. Gone are “hide the price” gimmicks of cap-and-trade. No trading, offsets, banking, borrowing or allowance give-aways to polluters. Sanders-Boxer would return 60% of revenue directly to households monthly, allot 25% to deficit reduction and dedicate the remaining 15% to green energy, weatherization and infrastructure “hardening” under a companion bill, the Sustainable Energy Act. The CPA bill includes border tax adjustments to protect U.S. energy-intensive industry and nudge our trading partners to enact their own carbon pricing measures. 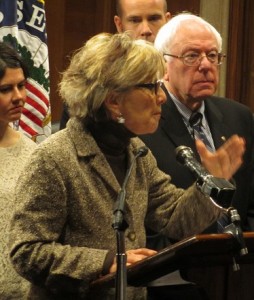 Opening a packed Capitol Hill press briefing yesterday morning, Sanders inveighed against partisan squabbling which he insisted must yield before the ineluctable laws of physics. Earlier scientific projections were wrong, Sanders said, “the crisis facing our planet is much more serious than they previously believed.” Sanders and Boxer conveyed alarming warnings of “global climate disruption” from a Senate Environment and Public Works Committee briefing on Wednesday. The panel of four scientists had concluded that without aggressive action, the earth will warm by 8 degrees Fahrenheit within a century, with consequences including 3 – 6 feet of sea level rise, more frequent and forceful damaging storms, drought, extreme crop loss and submerging of coastal cities.

At Thursday’s press briefing, climate activist-author and 350.org founder Bill McKibben thanked Sanders and Boxer for grasping the “depth of the climate problem” and moving to end the fossil fuel industry’s free dumping of pollution into the atmosphere. Sierra Club director Michael Brune, Public Citizen’s Tyson Slocum, Tara McGuiness of the Center for American Progress and Meg Power of the National Community Action Foundation all praised the effectiveness and fairness of the bills.

Reporters immediately questioned how the two bills could move forward. Boxer said she has just begun seeking co-sponsors and hasn’t conferred with Majority Leader Harry Reid about scheduling. But she expects to conduct hearings and markup in Environment & Public Works and to bring the measures to the Senate floor by summer. Replying to a question about EPA greenhouse gas regulations, she said, “We’ve beaten back” Republican repeal efforts. “The Clean Air Act is the law of the land” which the President “must carry out.” Boxer suggested that public opinion on climate is “far ahead” of Congress, “no one is asking for dirtier air or water.” But she offered no plans to reach across the aisle to enact their bills, either in the Democratic-controlled Senate or the Republican House. She called on environmental and public interest organizations to build support for climate legislation. Sanders suggested that the public hold accountable “Republicans who refuse to even recognize the reality of climate change.”

The Climate Protection Act certainly sets a high standard. By our lights, it’s the most potent climate legislation ever introduced in the Senate. The Carbon Tax Center gauges efficacy primarily by the price polluters would pay. Along with most economists, we are convinced that a briskly-rising price on CO2 pollution is hands down the most broadly-effective and potent force to reduce emissions and open the way for renewables, efficiency and innovation. While the CPA’s price trajectory isn’t nearly as aggressive as our own “gold standard,” Rep. John Larson’s 2009 bill (which we’ve been told he will reintroduce soon), we view CPA as a good start. We estimate Sanders-Boxer would reduce emissions by about 12% below 2005 levels in a decade. (In contrast, Rep. Larson’s more robust carbon price ramp-up would reduce emissions by 30% in the same time period.)

CPA’s proposed direct distribution of 60% of revenue would protect most low- and moderate-income households from the effects of energy price increases, without diluting incentives for everyone to reduce fossil fuel use. Its 25% share of revenue designated for deficit reduction (essentially compelled by Congressional Budget Office accounting rules) could appeal to deficit hawks. We’re less confident that energy subsidies would be well spent. But as Senator Sanders noted, home weatherization that cuts utility bills is like a permanent tax cut. Instead of subsidies, we recommend more revenue return to households to ensure growing public support for continued brisk increases in the price of carbon pollution needed to achieve scientifically-mandated emissions reduction in the range of (or exceeding) 80% by 2050. In British Columbia, dedicating carbon tax revenues to cutting a range of other taxes on work, business and consumption has marshaled public support for four annual carbon tax increases.

As we heard the press conference, Boxer and Sanders seem to have written off every member of the Republican caucus as a potential collaborator on climate policy. If that’s the case, they may be writing off this Congress and the opportunity that a looming sequester and debt ceiling crisis may present to shift taxes on productive activity to taxes on CO2 pollution.

A proposal like Sanders-Boxer combined with one like those of Hassett, Morris and Marron could yield a broad and popular carbon tax swap like British Columbia’s. We simply can’t afford to give up on this Congress and wait any longer to start putting the brakes on global climate disruption.