NRDC has a new twist on an old idea: use the Clean Air Act to address climate change. The venerable environmental-law group wants EPA to make the states establish statewide performance standards requiring electricity providers to steadily lower their emissions of carbon dioxide per kilowatt-hour produced. “Closing the Power Plant Carbon Pollution Loophole” is the name of NRDC’s initiative, and it’s backed by a 90-page report replete with elaborate modeling and head-spinning fine print.

The council calls its proposal “groundbreaking,” and two of the green movement’s heavy hitters agree. “Obama can tackle climate in his second term, and he doesn’t need Congress to do it,” enthused David Roberts at Grist:

It is still possible for Barack Obama to secure an honorable climate legacy. He can dramatically reduce U.S. carbon emissions in his second term. And he can do it without help from Congress. He doesn’t even need a crafty new plan — the Natural Resources Defense Council has come up with one for him, based on a provision in the Clean Air Act. All he needs is political courage. 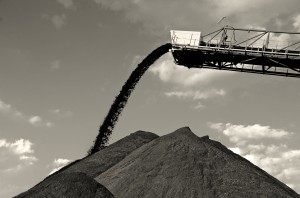 Coal being unloaded at a Wyandotte, Mi power plant.

But would it? The answer may depend on the definition of “tremendous.”

By bundling the projected decrease with anticipated reductions from automobiles due to stiffer CAFÉ standards, along with ongoing displacement of high-carbon coal by fracked gas, the council figures that the U.S. can meet the old Waxman-Markey goal of trimming 2020 emissions by 17% below the 2005 level. If that’s a “tremendous difference,” then Obama’s 4-point popular vote margin over Romney was a landslide.

A contrary perspective comes, unsurprisingly, from the Heritage Foundation, a leader of the climate-denialist camp. But Heritage may be on to something. As the right-wing think tank’s climate policy point man David Kreutzer pointed out last week, the entire hoped-for drop in U.S. emissions to 2025 is less than the 720 million metric ton increase in China’s CO2 emissions in 2011. Kreutzer acidly noted, “[T]he NRDC goal for 12 years worth of reductions in the U.S. will be more than offset with one year’s worth of increases in one developing country.”

To be sure, anti-climate diehards like Heritage obsessively flog China’s monstrous growth in CO2 emissions to justify U.S. stasis. But Kreutzer’s point can’t be dismissed just on account of the source. The downward bend in U.S. emissions via the NRDC initiative is indeed dwarfed by China’s business-as-usual trajectory. That might be tolerable if NRDC’s bright idea could serve as a template to put China on a carbon-busting course. But that’s improbable at best.

The NRDC proposal is painstakingly tailored to accommodate the marked differences in emission rates between coal-dependent and independent states. It’s also fiendishly complex, with intricate provisions for crediting utility uptake of renewables and efficiency. From a legal standpoint, predicts Clean Air Act expert Nate Richardson of Resources for the Future, “If [EPA] adopts NRDC’s proposal … that battle will be tough.” All in all, it’s hard to imagine other nations following the NRDC path.

Contrast that path to a U.S. carbon tax. As we’ve pointed out for years, most recently in this week’s U.S. News Debate Club, the border tax adjustments in a U.S. carbon tax would incentivize China and our other trading partners to impose their own carbon taxes so that carbon tax revenues flow to them, not the U.S. Treasury. Even a “starter” tax, like an $18/ton ($20/metric ton) levy that would raise enough revenue to extend the expiring payroll tax holiday, might well jumpstart carbon pollution pricing on a global scale.

That would be groundbreaking indeed.