Superstorm Sandy has made climate change believers of many, but none better-known than New York Governor Andrew Cuomo. “[C]limate change is a reality, extreme weather is a reality, it is a reality that we are vulnerable,” Cuomo told New Yorkers at a post-Sandy briefing on Wed. Oct. 31, a day and a half after the tidal surge from the storm inundated coastal communities and spread unprecedented devastation across hundreds of miles of shoreline — and far inland as well — in Long Island, New York City and neighboring New Jersey. Lost to flooding, wind and even fire are more than 100 lives, uncounted homes — I’m guessing well over 100,000 — and entire villages and towns. State officials are estimating that damage to the region will exceed $50 billion, today’s NY Times reports, making it the country’s costliest storm other than Hurricane Katrina, which wiped out much of New Orleans in 2005. 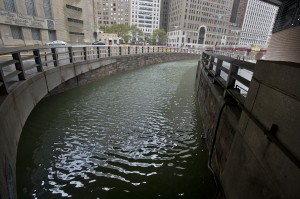 Cuomo’s words, while unremarkable to anyone conversant with the basics of climate science, were unprecedentedly frank not just for him but for any major U.S. office-holder. They were also unscripted, suggesting that the governor may have had a “conversion moment” in which old perceptions gave way to a new reality. If so, I’ll bet the trigger came on the evening when Sandy struck. That would have been when Cuomo came face-to-face with the massive power of the floods unleashed by the storm.

Here’s how that moment was described by the weekly New York Observer, in its blow-by-blow account of how top city and state officials fought to comprehend the storm’s destructive force:

Joe Lhota (Metropolitan Transportation Authority chief): When I got downtown to meet [NYC Transit head Tom] Prendergast, we were looking at where we were, we both realized how deep the water was at South Ferry station. It didn’t surprise me when we found out later that the water was all way up to the ceiling. It was four feet above the ground that night. And then we walked over to the Brooklyn-Battery Tunnel, where we ran into the governor totally by accident. I don’t know why I went over to the Brooklyn-Battery tunnel. I really don’t. We hadn’t been told about water rushing in, but we went over there, and boy, what I saw was extraordinary. White-water rapids, and a pace­ — you could have created hydro power.

I’ll use the words that the governor used. It was disorienting. It was. You heard it. You saw it. And you weren’t really sure you were hearing it and seeing it correctly. I never expected the Hudson River to do that.

Josh Vlasto (Cuomo administration communications director and senior adviser): The governor was standing with Lhota at the mouth of the Brooklyn-Battery Tunnel and the water was rushing in so quickly that the sound was deafening. I think that for him, that was the moment­ — where the water was that night, when you’re down there, standing at the tunnel, there’s so much water that you can’t hear­ — I think the governor would say that was the “We Got a Problem” moment.

Howard Glaser (Cuomo administration director of state operations): It was a sound you never heard before in Lower Manhattan, a rushing river. And then we went over to the World Trade Center and we saw Niagara Falls was pouring into the site.

Those aren’t quotes from the governor, of course, but they may as well be, given how tightly he stage-manages his administration’s utterances and given that Lhota, Vlasto and Glaser all serve at his pleasure.

Nearly halfway through his (first) term, Gov. Cuomo is arguably the state’s most powerful governor since Rockefeller and its most popular chief since FDR. He is already the subject of considerable speculation as a possible Democratic presidential candidate for 2016. At the same time, energy issues concerning renewables, nuclear power and especially fracking are an increasing presence on his state policy and political plate. Like other concerns, political attention to climate change will ebb and flow depending on public pressure and the flow of events. But if the governor indeed had a climate-change conversion moment along the lines I’m suggesting, that moment might just spark policies — incentives, regulations, and perhaps even a state carbon fee — that could turn New York State into a leader in arresting the buildup of carbon pollution in the state’s — and planet’s — atmosphere.