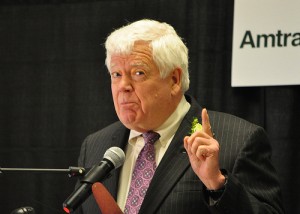 The Carbon Tax Center estimates that by imposing a steadily rising “upstream” tax on polluters emitting the six principal greenhouse gases driving global warming, McDermott’s bill would reduce U.S. greenhouse gas emissions by a whopping 30% within a decade. His elegant bill, just 21 pages of legislative text, would start modestly with a price of $12.50 per ton of CO2, but would then ramp up the cost of carbon pollution to $125 per ton of CO2 over a decade. (The actual price would fall within a tight, predictable price range. Non-CO2 greenhouse gases would be taxed at their CO2-equivalent rates.) CTC estimates that within a decade, McDermott’s price path would reduce greenhouse gas emissions almost twice as much as the most optimistic projections for prospective EPA regulations or the targets in the Waxman-Markey bill passed by the House in 2009 but dropped in the Senate the following year.

Consistent with World Trade Organization rules, McDermott’s bill would exempt U.S. exports of energy-intensive goods while imposing an equivalent pollution tax on imports. The bill would thus protect U.S. domestic energy-intensive trade-exposed industries from unfair competition while offering an irresistible (and growing) “carrot” for our trading partners to enact their own carbon taxes in order to capture a rising stream of carbon tax revenue that would otherwise flow to the U.S. Treasury.

The McDermott bill also obviates the need for emissions trading by requiring polluters to purchase permits as needed. It returns 75% of revenue directly to households through a monthly “dividend” for each adult (with a half share for each dependent). This provision eliminates regressive income effects on low- and middle-income households while preserving a clear price signal across the entire economy so that everyone is rewarded for efficiency, innovation and investment in renewable energy. The remaining 25% of the bill’s revenue would be dedicated to deficit reduction, a feature that is sure to be salient as Congress confronts the looming “fiscal cliff” next January.

CTC estimates that the revenue stream available for deficit reduction in the tenth year after enactment would be roughly $100 billion, even accounting for the 30% reduction in emissions.