Book Review: The Case for a Carbon Tax, by Shi-Ling Hsu 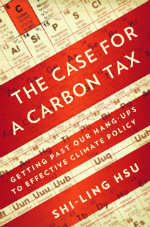 “The Case For A Carbon Tax” (Island Press, 2011, 233 pp) brings to mind Hans Christian Andersen’s “ugly duckling” story. The word “tax” screams “cost” to most people, and so the beauty of a carbon pollution tax isn’t apparent on first glance. Prof. Hsu reveals the beauty as he shows why a gradually-rising carbon tax is the least costly and most effective policy for curbing the pollution driving global warming, and how enacting such a tax can usher in a new era of clean energy and efficiency. 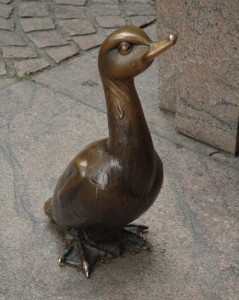 Trained in engineering, law and economics, Shi-Ling Hsu, a law professor who is moving from the University of British Columbia to Florida State University, deftly marshals a multi-disciplinary “case” for a carbon tax. He opens by describing and comparing the four main climate policy tools: subsidies, regulations, cap-and-trade, and carbon taxes. Then he briskly articulates ten arguments for a carbon tax, emphasizing economic efficiency and the advantages of basing a coordinated international system on a simple, transparent tax.

Hsu is especially strong in rebuttal, answering the arguments against carbon taxes, including the oft-repeated assertion that a carbon tax is politically impossible. He dissects psychological “hang-ups” that have kept the public and elected officials from embracing carbon taxes. Hsu points to British Columbia’s enactment and implementation of North America’s first carbon pollution tax, arguing that it is broadly supported because its revenue is used to reduce taxes for individuals and businesses. As Hsu and Yoram Bauman wrote this week in their New York Times op-ed, “The Most Sensible Tax of All“:

On Sunday, the best climate policy in the world got even better: British Columbia’s carbon tax — a tax on the carbon content of all fossil fuels burned in the province — increased from $25 to $30 per metric ton of carbon dioxide, making it more expensive to pollute. This was good news not only for the environment but for nearly everyone who pays taxes in British Columbia, because the carbon tax is used to reduce taxes for individuals and businesses. Thanks to this tax swap, British Columbia has lowered its corporate income tax rate to 10 percent from 12 percent, a rate that is among the lowest in the Group of 8 wealthy nations. Personal income taxes for people earning less than $119,000 per year are now the lowest in Canada, and there are targeted rebates for low-income and rural households.

Hsu crisply articulates the theory of Pigouvian taxes — the idea of taxing pollution rather than productive activity. But he sidesteps the thorny question of how high to set a carbon tax and how rapidly to increase it. And he does not mention the potential efficiency advantages of using carbon tax revenues to reduce other taxes such as taxes on work and thereby use climate policy to improve overall economic well-being. (Economists call that a “double dividend.”) He notes that while British Columbia’s carbon tax is revenue-neutral, the regressive effects of carbon taxes can be addressed by a wide variety of other mechanisms, leaving substantial revenue for cash-strapped governments, as recent reports and a new book by the International Monetary Fund have stressed.

Hsu delves into the limitations of EPA regulations, which he shows cannot create the broad incentives for innovation and planning needed to drive carbon eminssions way down:

A [carbon] tax, by imposing a cost on every single ton of pollutant, constantly engages the polluter with the task of reducing her pollution tax bill. By contrast, a command and control scheme that mandates a one shot, irrevocable installation of pollution control equipment allows for the polluter to stop thinking about pollution reduction. Why, if compliance is achieved, should the polluter look for other ways to reduce?

There are further problems, too: EPA can too easily be persuaded or intimidated by industry into granting exemptions and relaxing standards. Hsu also glosses over the enormous effort that would be required to write and enforce permits for each of the thousands of point sources of CO2. One has to wonder where and how the already-stretched EPA (and state environmental agencies) would find funding for such a massive undertaking.

Hsu neatly unveils the hidden high cost of taxpayer-funded subsidies of renewables and supposed low-carbon fuels. Subsidies, along with regulations and cap-and-trade with offsets, are attractive to the public and Congress despite serious limitations on their effectiveness, because their costs are largely hidden. Not only is Congress notoriously ineffective at picking technology winners, but subsidies create “lock-in” to incumbent technologies and businesses, foreclosing opportunities to spur innovation. In contrast, as Hsu shows, a carbon pollution tax’s laser focus on CO2 pollution creates incentives for all low-carbon alternatives, leaving specific technology decisions to engineers rather than politicians.

Cap-and-trade with offsets seems to be Hsu’s choice for second-best policy; it allows flexibility and could result in a “price on carbon” pollution, albeit one that is indirect and subject to price volatility. Happily, Hsu debunks the notion of “emissions certainty” that was used to sell cap-and-trade, by pointing out that for a “stock” pollutant such as CO2 that persists in the atmosphere for a century, the objective must be cumulative rather than annual reductions. Even year-to-year “emissions certainty” is vitiated in the European Emissions Trading System by provisions allowing borrowing and banking of allowances as well as by voluminous offsets. Carbon prices there have remained so low that recent analyses have concluded that industrial facilities will have little incentive to reduce their emissions through at least 2020.

Hsu points out the hidden costs that cap-and-trade would impose on consumers, profiting the financial sector and purveyors of offsets. His most egregious example: Chinese refrigerant manufacturers who garnered far more revenue from offsets awarded for destroying their greenhouse gas byproducts than from the sale of their underlying products. As documented by UN and GAO reports, the carbon market paid about 100 times more for the installation of emissions reducing equipment (an HCFC 23 incinerator) than the price of the equipment. The Chinese refrigerant manufacturer and the investors in the offset project reaped those windfalls, contradicting claims about the efficiency of cap-and-trade.

As Hsu illustrates, evaluating and verifying offset projects is staggeringly difficult. Applications for hundreds of different project types are submitted to a single U.N. panel with little capacity to evaluate “additionality” — to determine whether projects would have occurred in the absence of offset funding. Stanford University law professor and offset expert Michael Wara estimates that 30-50% of offset projects in the U.N. systems should not have been awarded credit, a fraction so large as to overwhelm any claim of “emissions certainty” under a cap with offsets.

Hsu concludes that linking cap-and-trade internationally would offer constant opportunities for mischief and arbitrage. In contrast, under a tax every country would have an incentive to scrupulously monitor emissions in order to collect the revenue. Moreover, the transparency of a carbon tax offers potential for international linkage via World Trade Organization sanctioned Border Tax Adjustments. WTO rules were built around a consumption tax — the European Union’s Value Added Tax; Hsu suggests that a carbon tax should similarly be supportable under WTO rules. But he seems to understate the capacity of Border Tax Adjustments to protect domestic energy-intensive industry while offering a growing monetary incentive to trading partners to enact their own carbon taxes.

Finally, Hsu’s discussion of the psychology of carbon taxes adds a dimension that we haven’t seen elsewhere. As behavioral economists like Daniel Kahneman have shown, we humans tend to underestimate the benefits of avoiding future harms while overestimating the cost to avoid them. And when a harm isn’t clearly identified with a specific person or persons, we have difficulty feeling concern. One child trapped in a well evokes national interest and empathy, but because we can’t see or name the millions who might drown or starve because of climate instability, we refuse to bear the near-term price of avoiding catastrophe. And we are easily misled into thinking that policies whose price is hidden, such as subsidies, regulations or cap-and-trade with offsets, are preferable to a carbon tax. Hsu proposes that polls disclose the cost of all policy alternatives in order to fairly gauge public opinion.

Hsu’s book offers a readable and authoritative, comprehensive and concise “case” for the most broadly effective, least-bureaucratic and least-costly approach to the climate crisis: a gradually-rising carbon pollution tax. We highly recommend “The Case For A Carbon Tax” to both general audiences and to those steeped in climate policy who may be seeking further insight on the nuances.