Austerity is dead — the victim of its 2010-2012 failure in the Eurozone. At last week’s G-8 summit at Camp David, leaders called for growth, not austerity. Even German Chancellor Angela Merkel, the iron lady of austerity, conceded that the crisis in Greece would require stimulus. A week earlier, IMF Director Christine Lagarde called for growth-oriented policies. And on May 6, the French elected socialist Francois Hollande, rejecting the austerity policies of his predecessor, Nicolas Sarkozy. 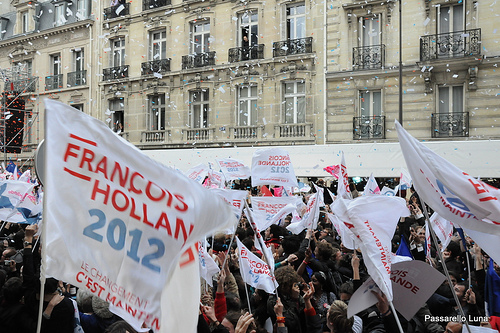 French Voters Gave Austerity the Boot on May 6

So what will austerity’s demise do to the case for a U.S. carbon tax, given that new taxes, or tax hikes in any form, are one of the two pillars of austerity? (The other, of course, is governmental spending cuts.) The answer to that question depends on the alternatives and the uses of the carbon tax revenues, but the key points are these: first, a carbon tax is almost certain to be better for economic growth than draconian spending cuts or higher taxes on incomes or wages; second, if its revenues are used to reduce other taxes or are spent in ways that spur employment, the net effect of a carbon tax can be stimulative.

Ironically, while there is now, finally, broad consensus that austerity in Europe has stunted its economic growth, the fragile U.S. recovery faces a ticking time bomb of automatic austerity, set to go off on January 1. Unless Congress acts, the deficit ceiling legislation enacted in 2011 will “sequester” $1.2 trillion of automatic across-the-board cuts on military and domestic spending. At exactly the same time, the Bush tax cuts are set to expire, which will raise the effective federal tax rate from about 16% of GDP to the Clinton-era 20% level. Last but not least, the payroll tax holiday is set to expire on Jan. 1 as well.

The alternatives to letting those time bombs explode are (i) repeal the “sequester” and extend the Bush tax cuts and the payroll tax holiday (leading to even larger deficits), or (ii) increase revenue by broadening the tax base. In 2010, two bipartisan deficit commissions, “Simpson-Bowles” (officially the National Commission on Fiscal Responsibility and Reform) and Rivlin-Domenici, recommended sweeping tax and entitlement reform. Rivlin-Domenici went further, urging broadening of the tax base by imposing a European style Value Added Tax. A VAT, of course, is a regressive sales tax (levied on virtually all consumer purchases) that can suck up revenue like almost nothing else. But it is so broadly based that it offers little environmental benefit. Other revenue options include worthy but politically-loaded proposals like repealing or limiting the home mortgage deduction.

Where does this leave a carbon tax? In our view, a tax on carbon emissions that starts low or even at zero, with a built-in ramp up over time (as recommended by former Fed Vice-Chair Alan Blinder), is an attractive alternative to pretty much everything on the standard menu — a VAT, higher income taxes or draconian spending cuts. A gradually-rising carbon tax would also yield gradually increasing revenues, helping to close the deficit while working better (at lower cost and more broadly) than any other policy to reduce global warming pollution. One particularly stimulative way to use carbon tax revenue would be to fund and expand the payroll tax holiday, a stimulus measure enacted in 2010 that increased employee paychecks by up to $2,000, but which is set to expire at the end of this year.

Economic analysts of virtually every stripe agree that unparalleled uncertainty about the strength of the recovery is helping to hold back investment and growth. Beyond the general lack of confidence, the energy sector faces additional regulatory and price uncertainty. A clear, upward price trajectory on carbon pollution would give entrepreneurs and investors in efficiency and renewables something to bank on. Without that predictable price signal, renewables will continue to face the prospect of “feast or famine” depending on Congressionally-enacted subsidies or the even more volatile price instability of cap-and-trade systems. And if a carbon tax helps avert an automatic “sequester” triggering draconian cuts in social programs, the result will be enormously better for low and moderate-income households that depend on the safety net.

The fact is that none of the options for avoiding a “fiscal cliff” on Jan. 1, 2013 are pretty. In that context, the dependably-growing revenue stream along with the vast climate benefits of a predictably-rising carbon tax make it a potential winner.