Game Over for Keystone XL? Backing Up Hansen’s Oil Savings from a Carbon Tax

“Game Over for the Climate,” Dr. James Hansen’s powerful op-ed in yesterday’s New York Times, adds a compelling new argument to the case for ditching the Keystone XL pipeline:

We should impose a gradually rising carbon fee, collected from fossil fuel companies … [T]he reduction in oil use resulting from the carbon price would be nearly six times as great as the oil supply from the proposed pipeline from Canada, rendering the pipeline superfluous, according to economic models driven by a slowly rising carbon price. (Emphasis added.)

Please be assured that Dr. Hansen’s “nearly six times” assertion is oil vs. oil, so that the substantial reductions in coal use are additional. His figure drew on modeling by the Carbon Tax Center, as I detail below.

The Keystone XL pipeline is primarily intended to carry crude oil refined from Alberta tar sands to various refineries in the U.S. Some crude would enter in Montana and Oklahoma as well, according to Wikipedia. Given the pipeline’s multiple entry and exit points, there may not be a definitive figure for the incremental tar sand crude it will deliver. Dr. Hansen’s figure is 830,000 barrels a day. Friends of the Earth, which is helping spearhead resistance to the pipeline, says “The Keystone XL pipeline would carry 900,000 barrels of dirty tar sands oil into the United States daily,” or 8-9% more than Hansen’s figure.

As the graphic suggests, our modeling indicates that the oil savings in goods movement alone propelled by a carbon tax would be comparable to the oil delivered to this country by Keystone XL. And that’s just in the tax’s tenth year; the savings would grow further as the tax continued to ramp up, in contrast to Keystone’s maxed-out and eventually declining oil supply. Savings in each of the two top oil-consuming categories ― personal ground travel (mostly autos and light trucks, of course, but also recreational toys such as off-road vehicles and powerboats) ― and the catch-all “Other” (petroleum used in heating, construction, industry, agriculture, and oil refining itself) would be roughly double Keystone’s supply. All told, U.S. consumption of petroleum products in the tenth year of a carbon tax would be nearly 5 million barrels per day less than the business-as-usual projection, a reduction of 24%. 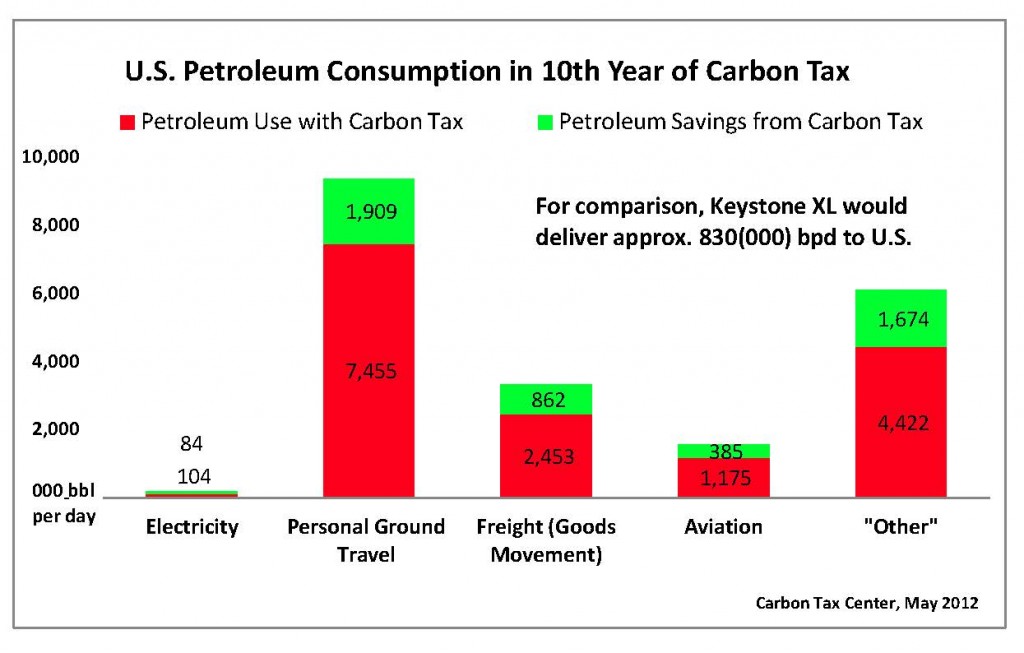 These savings assume the carbon tax devised by Rep. John B. Larson (D-CT) in 2009 and embodied in legislation he introduced in the House. That’s the carbon tax (or “fee,” to use the term Dr. Hansen prefers) that Jim assumed in his op-ed. It kicks off with a first-year level of $15/ton of carbon dioxide and rises at $10-$15/ton per year (we assume $12.50 in our modeling), reaching $127.50/ton of CO2 in its tenth year.

To be sure, Rep. Larson’s carbon tax proposal is an “aggressive” one. A carbon tax that gradually but steadily — unlike the violent gasoline price swings delivered by “the market” — raised prices of gasoline and other petroleum products by 10-12 cents a gallon each year would cut deeply into petroleum usage by driving consumers and businesses to make different (and more efficient) choices on both the demand and supply sides. And the tax would simultaneously reduce coal-burning for electricity generation — the source of one-third of all U.S. CO2 emissions from fossil fuel combustion until very recently — even more, because alternatives and low-cost opportunities for efficiency in that sector are even more abundant.

Here are some of the multitude of ways in which a predictably and steadily rising price for petroleum products would engender reductions in their provision and use:

While no econometric model can precisely predict the uptake of each of these measures, economists have combed empirical evidence for decades to infer sector-wide price-elasticities. (“Elasticity” is simply a measure of how much economic actors respond to price changes.) In our modeling of gasoline usage, we assume a 0.4 long-run price elasticity and a decarbonization rate of 1% for each $10/ton attached to CO2 emissions. For the various petroleum products that make up the “Other” category, we assume a slightly greater price-elasticity, 0.5, and the same decarbonization rate as for gasoline. (See further discussion on the Carbon Tax Center’s Web site, here.) The model also builds in lags to reflect lead times needed to adapt to the rising prices (note that legislating a steady ramp-up of the carbon tax would help compress the lags, since carbon-critical decisions could be made with an eye toward future prices rather than just last month’s).

Readers with an analytical bent may want to download the Carbon Tax Center’s carbon tax spreadsheet model. (Note that the link can also be found near the top of our home page, in the second-bulleted paragraph in the light yellow block of text.) With the model in hand, you may alter the carbon tax’s starting amount and the increase rate in the Summary page of the model, if you wish. On the Graph_CO2 page, the model plots emissions reductions compared to “business as usual,” giving an easily understood representation of the extent to which CO2 emissions would decline over time in response to the chosen carbon tax and rate of increase.

The section on “Annual Oil Requirements” begins at Row 173 of the Summary page. The tenth-year savings are shown in Column Y, corresponding to 2021, which would have been the tenth year of the Larson carbon tax, had it been enacted in 2010 or 2011 with startup in 2012.

The model, while skeletal in some ways, is intended to allow analysts and advocates to gauge the approximate impacts of different carbon-price designs on emissions, revenue, petroleum and other key parameters. We’re proud that Dr. Hansen relied on it in his Times op-ed, and we’re glad he continues to point to the enormous benefits of a steadily-rising carbon fee.