It’s not cap vs. tax anymore; it’s what kind of tax? That’s the take-home from a symposium, Fiscal Reform and Climate Protection: Considering a U.S. Carbon Tax, held earlier this week at Resources for the Future and co-sponsored by the Peterson Institute for International Economics. 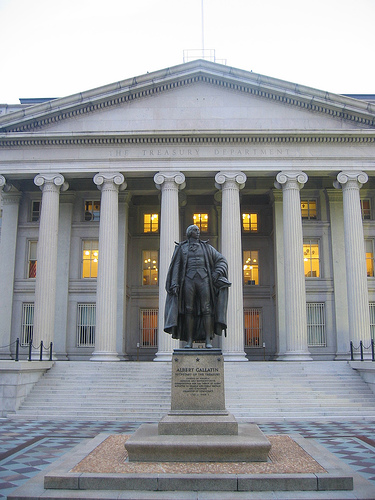 American Enterprise Institute economist Kevin Hassett opened the day by pointing out that economists hadn’t convinced enough Republican lawmakers of the benefits of replacing taxes on productive activity with a tax on CO2 pollution. Hassett noted that damage from fossil fuels’ conventional pollution is large enough to justify a carbon tax even without considering global warming. But he hewed closer to Republican orthodoxy when he cautioned that it would be “folly” for environmentalists and Democrats to try to “prove their machismo” by “holding out for a $65/ton CO2 tax” to combat global warming. Hassett expressed relief that “corrupt” cap-and-trade “is finally behind us.”

RFF’s Ian Parry highlighted the intriguing potential for a CO2 tax to reduce emissions while increasing economic output — provided the revenue is used to cut distortionary taxes that otherwise drag down economic activity — a phenomenon that economists call a “double dividend.” As articulated in their paper, Moving U.S. Climate Policy Forward: Are Carbon Taxes the Only Good Alternative? Parry and his RFF colleague Roberton Williams advocate using carbon tax revenue to cut taxes on payroll and on savings or to lighten future tax burdens. Parry said he estimates that a $33/ton CO2 tax dedicated entirely to deficit reduction could close 25% of the U.S. budget gap.

Bob Simon, Staff Director of the Senate Energy and Natural Resources Committee (ENR), remarked that once one passes the “fork in the road” between “cap” and “tax,” the road signs look the same. Both policies must address revenue, regional disparities and impacts on energy-intensive trade-exposed industries. Simon suggested that broad multi-sector policies like caps and carbon taxes are more politically fraught than sector-specific policies like the Clean Electricity Standard for utilities that ENR voted up two years ago.

Joe Aldy, former White House special assistant on climate, pointed out that a $20/ton CO2 tax could raise $100 billion a year. Aldy, now teaching economics at Harvard, expressed hope that the advantages of a carbon tax will make it more attractive to deficit cutters than other options such as a value-added tax, a cut in mortgage deductions, or curtailing benefits.

Trevor Hauser, an energy specialist at the Peterson Institute for International Economics, presented new modeling results indicating that regional variations in carbon tax incidence may be as little as 3%. Moreover, the emergence of shale gas as a resource option in coal-dependent states may soften opposition there, he suggested, improving legislative prospects for a carbon tax. Hauser stressed both the climate and fiscal benefits of a carbon tax; he showed a Chamber of Commerce memo rating a carbon tax as the most cost-effective climate policy, but he noted that their position may have changed.

Post Script: On the very next day, the Brookings Institution convened a complementary meeting, Time to ’86 the Tax Code? Prospects for Tax Reform After 25 Years. Brookings’ Director for Climate and Energy Economics Adele Morris urged those concerned about climate to push for inclusion of a carbon tax in fiscal and tax reform. In contrast to a value-added tax, Morris pointed out that carbon taxes offer unique additional advantages – they reduce CO2 emissions at the lowest cost and improve the efficiency of the economy.