The Carbon Tax Center lost a dear friend and generous supporter last week, and the world lost a unique soul, with the passing of Seymour Schwartz — builder, environmentalist, philanthropist, and humanist.

Sy was 88, a World War II vet, father of three, with nine grandchildren. In an obit in last Sunday Times, Sy’s family described him as “visionary real estate developer, environmental champion, and, later, founder of the Common Sense Fund,” a non-profit that promotes practical, creative action on the environment and in the arts. 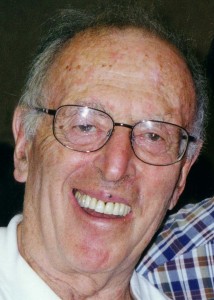 The Carbon Tax Center has been a fortunate beneficiary of Sy’s vision since our founding in 2007. The support of the Common Sense Fund was integral to the success of our three major public fora to date: the Congressional carbon-tax briefings we convened in 2008 (U.S. House) and 2009 (Senate) and our “Pricing Carbon” Wesleyan Conference last November. Sy’s mixture of optimistic idealism and hard-won realism was a mirror image to ours, and we hope CTC served his beliefs well.

The Common Sense Fund’s Web site says this about Sy:

Over a long career as a real estate developer in Connecticut, Sy was a visionary builder, using conservation zoning before it was popular, understanding how to work with challenging topography, and exploring and implementing alternative energy sources long before the mass realization of global warming.

It was Sy’s ardor for renewable energy that led to our meeting, in the winter of 2005, when Sy was 81. He had seen a video clip of me inveighing against the well-heeled opponents of the Cape Wind project in Nantucket Sound, and he rang me up, suspecting I might be a kindred soul. Little did he know! We quickly bonded over our disdain for self-professed environmentalists who support renewable energy so long as it’s not built nearby. Before long, we realized that our connection ran deeper and included devotion to nature, predilection for straight talk, and love of classical music.

Sy’s life story could fill a book. Yet somehow, his family captured his essence in these 40 words:

Sy had an independent and creative mind; he could make you rethink your position on settled questions. He was a lover of Bach, a walker, and an advocate for the common man. He understood that he was a fortunate man.

Sy relished the beauty in the world while retaining a wry appreciation of life’s absurdities and contradictions. He marveled at modern medical technology, but despaired over its costs and inequities. He was in awe of China’s progress in eradicating chronic poverty, but appalled at its ecological heedlessness. He feared that the world couldn’t stop climate change without building more reactors, but had no qualms in declaring that Fukushima would set back nuclear power for decades. He recognized the need for both congestion pricing and carbon taxes, but was keenly aware of the enormous political difficulty of enacting them.

Sy lived simply and considerately, and he wore old age with grace. He had a little bit of Gandhi in him, though none of the self-righteousness, and some of Mozart’s lightness too. He was sentimental but not soft, cantankerous yet sweet. He had a keen intelligence, a restless mind, and a great heart.