From a climate standpoint, natural gas appears to have two huge advantages over coal. First, gas combustion releases 40% less carbon dioxide per Btu produced than does coal. Second, gas-fired power plants using “combined cycle technology” require 40% fewer Btu’s to produce each kilowatt-hour than coal-fired plants. Chain those advantages, and you find that new gas-fired power plants can produce 2.7 – 2.8 times as much electricity as a typical coal-fired generator while emitting the same CO2. No wonder gas is touted as a “bridge fuel” to renewables from coal, which accounts for 45% of U.S. electricity generation and a third of U.S. carbon dioxide emissions.

Of late, however, scrutiny of “fugitive” emissions from gas extraction and transmission is calling into question the assumption that gas is more benign for Earth’s climate than coal. The new wrinkle isn’t CO2 but methane itself, a potent greenhouse gas in its own right which can escape into the atmosphere at almost every step of the natural gas “fuel cycle.”

Natural gas (or simply “gas”) is 99% methane (CH4). Viewed over a 100-year time horizon (as the 2008 IPCC Fourth Assessment report did), methane’s greenhouse potency — its heat-trapping capacity, per pound of gas in the atmosphere — is roughly 25 times that of CO2. And if a 20-year timeframe is used, the greenhouse potency of a pound of methane becomes 72 times that of a pound of carbon dioxide. (The difference between the ratios arises because methane in the atmosphere breaks down about ten times as fast as CO2 — roughly a decade on average vs. a century for CO2.) 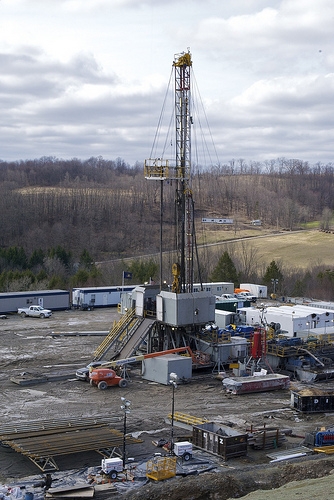 “hydrofracking” (or “fracking”). A highly invasive drilling process that releases gas by subjecting underground shale rock to hydraulic fracturing, fracking is being touted as a global-energy game changer. (“How Shale Gas Is Going To Rock The World” was the title of a May 2010 Wall Street Journal “special report.”)  But fracking is also an emerging source of massive air, soil and water pollution in states such as Pennsylvania that are the epicenter of the fracking boom.

In a recently-published peer-reviewed article, Prof. Robert Howarth and colleagues at Cornell University calculated methane releases from fracking and combined them with EPA data on gas pipeline leak rates to estimate methane losses across the gas fuel cycle. Their findings are sobering.  For every 100 cubic feet (the standard volume measurement) of natural gas “gathered” at the well and transferred to the transmission system:

(EPA is expected to revise these estimates upward in view of more complete reporting showing greater leak rates, according to Howarth.)

Howarth et al. caution that their figures are based on very limited data, and are calling for further study. Nevertheless, their preliminary conclusion is that due to fugitive emissions in both the fracking process and gas pipelines, frack gas is causing as much global warming and climate change, per unit of energy output, as is coal. While that result is calculated for a 20-year timeframe, which understates the overall impact of carbon dioxide and, therefore, of coal, even over a 100-year timeframe fugitive emissions appear to take a huge bite out of any climate advantages that might otherwise be ascribed to natural gas.

It’s important to note that the Howarth analysis doesn’t take into account the second of the two “40% advantages” that we noted at the beginning of this post — the one reflecting the greater electric-generation efficiency of combined cycle gas turbines over conventional coal-fired steam turbines. This omission is significant in light of the fact that this efficiency edge has made combined cycle technology the overwhelming choice for recently-completed and proposed new gas-fired power plants. But regardless of the exact quantitative comparison between coal and frack gas, Howarth et al. are focusing much-needed attention on what now appears to have been the even starker omission (by most analysts) of substantial fugitive methane emissions in the natural gas fuel cycle.

Furthermore, as a frack gas drilling boom sweeps over the Marcellus Shale region of southwestern New York and huge swaths of Pennsylvania and West Virginia, residents are learning the hard way that fracking leaves vast amounts of dangerous chemicals in groundwater while also dumping polluted water, some of it radioactive, into rivers and streams. Congress is barely beginning to consider measures to close loopholes that exempt fracking from the Safe Drinking Water Act and the Clean Air Act, and these defensive initiatives are far behind the “NAT GAS” bill pushed by billionaire hydrocarbon mogul T. Boone Pickens to jumpstart a huge market for natural gas vehicles by subsidizing conversion of fleet vehicles and heavy trucks to gas.

Is there a way to legislate a clampdown on fugitive emissions of methane? Regulation requiring capture of gas, especially during the flow-back phase of gas drilling, should certainly be considered. But economic incentives are also worth a close look. Several carbon tax proposals would tax other greenhouse gases, including methane because, after CO2, it’s the top greenhouse gas driving Earth’s climate into instability. If, as Howarth and his colleagues have documented, fugitive methane emissions are a serious threat to Earth’s climate, could a tax on those methane emissions at their CO2-equivalent price correct the apparent market failure that leaves drillers willing to vent valuable and very climate-damaging methane?

We think so. Because methane is (at least) 25 times as potent a greenhouse gas as CO2, let’s consider a fugitive methane tax of 25 times the carbon tax rate, to reflect that potency. We calculate that a tax of $25 per ton of CO2 — to pick a modest, but not insignificant level — would imply a tax on fugitive gas of $13 per thousand cubic feet.* Since natural gas currently sells in wholesale markets for around $4 per thousand cubic feet (down from as much as $12 before the onset of the financial crisis), this tax would more than quadruple the incentive to capture methane provided by its current market price. That would appear to be a lot of leverage to capture fugitive methane, even from a fee pegged to a relatively modest carbon tax.

Howarth et al. report a huge range of fugitive methane emissions over the life of different frack wells — from a low of 140,000 cu ft to a high of 6,800,000.  At $13 / 1000 cu ft, the tax on those fugitive emissions would range from only around $60,000 per well to as much as several million dollars. (This enormous range is partly an artifact of the limited data available to Howarth.) While the low end is just peanuts to frack drillers, the high end is a significant fraction of the $2 to $10 million or more cost to drill a well (see p 25 of linked document).  It seems reasonable to expect that this tax, along with the market price of gas and the expectation of a rising CO2 (and equivalent fugitive gas) charge, would encourage deployment of equipment to capture, compress and store gas, at least at larger wells.

As both Howarth et al. and a recent report by the Post Carbon Institute point out, gas pipelines generally aren’t built and connected until wells are completed. Thus, well drillers who aren’t typically in the business of selling gas (and may not even own the rights to it) may not have ready access to gas pipelines and markets. This “split incentive,” along with the rush to establish and maintain drilling rights before leases expire, may help explain the reckless, wasteful discharge of climate-damaging methane into the atmosphere from frack wells. But gas can be compressed and transported by truck, so we’d expect that the price incentives of a rising greenhouse gas tax on fugitive methane would push well drillers to find ways to capture more of their emissions. Similarly, a substantial price signal should induce pipeline companies to repair and monitor leaking distribution systems. In this way, more of the lifecycle combustion advantages of natural gas as a true transition fuel could be realized.

As for fracking’s often-horrific “other” emissions: tough and comprehensive regulations are sorely needed. Congress should start with the “FRAC Act” H.R. 1084/S. 587 introduced by Rep. DeGette (D-CO) and Sen. Casey (D-PA), which would eliminate fracking’s exemption from the Safe Drinking Water Act; and the “BREATHE Act,” H.R. 1204 by Rep. Polis (D-CO.), which would bring fracking under the Clean Air Act.