What a mess is Can We Do Without the Mideast?, the tedious and simplistic headliner of last week’s New York Times special “Energy” section. 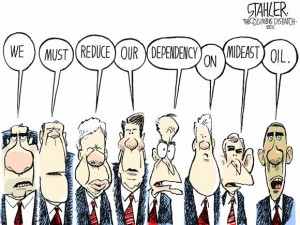 Overlooked entirely was the principal reason U.S. imports remain around 50 percent of consumption: the failure to raise taxes on transportation fuels — gasoline, diesel and jet fuel — and instill incentives to move people and goods less frequently, less inefficiently, and for shorter distances.

Krauss ascribes the singular success in reducing imports — temporarily halving them from 1977 to 1982 — to “the efforts of the Nixon, Ford and Carter administrations.” Yet what made auto-efficiency and other fuel-saving standards politically viable while motivating millions of households and businesses to economize on oil was the rise in petroleum prices.

The notion of a carbon tax received its token mention, as did the existence of something called climate change. Otherwise, the article was one dreary cheer for dirty energy including shale gas (a winner, “presuming that the oil and gas industry can answer growing environmental concerns surrounding their hydraulic fracturing practices”), synthetic oil from tar sands (speciously, “if the United States does not import that oil, China will”), and even nukes (astoundingly, “In the aftermath of the Japanese disaster, nuclear power will need to be put on safer footing and expanded.”).

You can’t make this stuff up.