Last month’s Pricing Carbon Conference at Wesleyan U. featured a debate over three competing approaches for pricing carbon emissions, each of which is embodied in bills introduced in the 111th Congress:

The Conference also offered a workshop comparing two ways to return revenues raised by a carbon tax or by selling carbon emission permits: 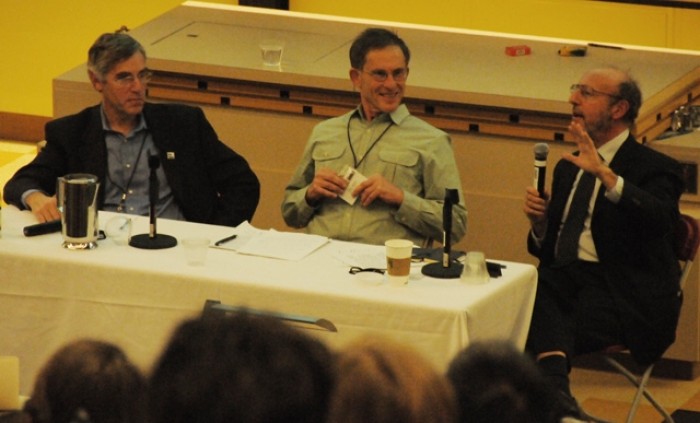 As hoped, the Conference has sparked a flurry of substantive and strategic discussions. For example, cap-and-dividend advocate Peter Barnes is imploring us to align the Carbon Tax Center with the CLEAR cap-and-dividend bill introduced in December 2009 by Senators Cantwell (D-WA) and Collins (R-ME).

The CLEAR bill is backed by a coalition of largely grassroots organizations, who view it as a way to achieve a guaranteed reduction in emissions without the political compromises and anti-consumer aspect of cap-and-trade with offsets. We hold Peter and his coalition partners in high regard. Their cap-and-dividend concept is certainly a quantum improvement over the cap/trade/offset model that some of the mainstream environmental groups rode to defeat (again) in 2009-2010. Yet both the concept and the particulars of the CLEAR bill fall far short of what we at CTC believe is required in carbon-pricing legislation.

In this post, we contrast the CLEAR bill with the approach taken by Rep. Larson (D-CT) and 12 co-sponsors in their carbon tax bill, America’s Energy Security Trust Fund Act, which Mr. Larson pledged at Wesleyan to re-introduce in the new Congress that convenes in January.

The CLEAR Bill at a Glance

Like all cap-based bills, the CLEAR bill relies on a declining “cap” in the number of carbon emission permits to be auctioned to emitters. In CLEAR’s case, the promised decline (relative to 2005 emissions) would be 20% in 2020, 30% in 2025, and so forth, finally reaching an 83% drop by 2050. CLEAR would return 75% of the revenues from the permit auctions to all U.S. residents, with each getting an identical amount. The remaining 25% of revenue would be placed in a “Clean Energy Reinvestment Trust Fund” (CERT) for appropriation by Congress, ostensibly to “green energy” investments, mitigation, adaptation and transition assistance.

As a brake on price volatility, and to provide a modicum of price predictability, CLEAR sets a floor and ceiling on the prices of the carbon emission permits: the floor is set at $7 per ton of CO2 rising at 6.5% annually plus the rate of general inflation, with the ceiling at $21/ton, rising at 5.5% plus inflation. The floor is intended to protect investments in low-carbon measures by ensuring that fossil fuel prices include at least a minimum charge for their carbon emissions, while the ceiling is intended to shield consumers from too-rapid price rises. When the ceiling is hit, a “safety valve” in the CLEAR bill triggers auctions of additional permits at the ceiling price; the revenue from these supplemental permits is added to the CERT fund.

The Carbon Tax Center has modeled the price levels needed to achieve particular emissions reductions. Our conclusion, using historical energy price-elasticity data, is stark: the CLEAR bill’s emissions reductions targets cannot be achieved within the bill’s low price ceiling. When we conveyed this finding at a meeting with Sen. Cantwell’s staff in early 2010, the response was even more stark: “We don’t intend to use (CO2) prices to reduce emissions.” — a statement that appears to deny the fundamental role of prices in driving changes in behavior. The apparent disconnect between CLEAR’s emission targets and its price ceiling means that the ceiling price would be hit frequently, perhaps even continuously. This in turn would open the safety valve and cause the auctioning of supplemental emission permits, whose revenue would fund CERT. In effect, then, as the cap tightened, CLEAR would function like a low carbon tax (with the level set at the safety valve auction price), an increasing share of whose revenues would flow to the CERT fund. The initial promise of returning 75% of revenue would recede as the cap tightened and an increasing share of revenue went to the CERT fund. In this respect, CLEAR might even come to resemble the “Breakthrough” proposal for a low carbon tax to fund RD&D, albeit with less specificity about which technologies Congress might choose to subsidize and less clarity about the expected CO2 prices.

The CERT Fund—Big Dogs Eat First, But Can They Reduce Emissions?

Needless to say, the same interests that wrote themselves free allowances under the Waxman bill would use their political muscle to divide up the CLEAR bill’s CERT fund. Thus, no one should be surprised if “clean coal,” ethanol and other “incumbent” energy interests garnered a lion’s share of the CERT fund’s supposed “clean energy investments.”

Nevertheless, CLEAR proponents appear to assume that the CERT fund would achieve near-miraculous reductions in carbon emissions. Our modeling indicates that because CLEAR’s price level is held so low, the bill would have to rely on the CERT fund to achieve more than half of its mandated 2009-2020 emissions reductions. Indeed, with its low (5.5%) annual increase rate, CLEAR’s $21 ceiling price would rise to only about $35 in a decade; that’s less than a third of the 2020 price in the Larson bill. No wonder Larson is projected to reduce emissions by 30% by harnessing the power of real price signals, whereas the CLEAR bill would have to rely on unspecified (and likely pork-laden) energy “investment” simply to achieve a reduction of 20%.

The Vast Costs of Hiding the Price

The main (political) appeal of a cap seems to be to hide the price. Yet hiding the price from investors and households guarantees that caps will be far less effective than direct pricing mechanisms at inducing investment in low-carbon energy and efficiency. The Brattle Group, a well-respected economics consultancy, studied the price volatility in the European Union’s Emissions Trading Scheme and concluded, first, that the noisy, hidden price signal there delayed investment in alternative energy by a decade; and, second, that the cap-derived CO2 price would have to rise roughly twice as high to get the same emissions reductions as an explicit tax.

Moreover, as we saw in the acrimonious and puerile debate over the Waxman bill, “hide the price” leaves everybody with an Internet link free to speculate on the cost of the legislation, with estimates ranging from astronomical (by those opposing action) to microscopic (by those claiming that “cost controls” such as offsets would avoid the need for significant CO2 prices). The result of “hide the price” in 2009-10 was a confused public and a stymied Congress. There’s no reason to expect a clearer discussion if cap systems continue to be the preferred way to price carbon emissions.

Hiding the price under a cap also complicates international harmonization. As we described in a post here in March 2009, and “Report from Copenhagen: Forget carbon targets, just set a price” an explicit carbon tax with border tax adjustments can be an effective incentive for other nations to enact their own carbon taxes to garner the tax revenue that their carbon-taxing trading partners will otherwise collect on imports at the border.

The CLEAR bill seeks to avoid inducing speculative secondary markets by fiat: prohibiting entities that buy or sell emission permits from buying and selling carbon derivatives. It also would require CFTC, FERC and FTC to promulgate regulations on CO2 emissions trading. But as the Congressional Budget Office, Robert Shapiro and other economists have concluded: because of the energy industry’s need for insurance against wild price swings, the use of hedging instruments is unavoidable in the large and volatile CO2 markets that are inherent when setting a price indirectly using a cap. It appears inevitable that a secondary market would emerge overseas, if not illicitly onshore.

The CLEAR bill did perform a great service by bringing revenue return via “dividends” into public discussion, at a time when Waxman-Markey proposed what amounted to a 40-year earmark of carbon revenues. (W-M would have allocated 85% of allowances, overwhelmingly to “incumbent” energy interests – effectively, a hidden, volatile and regressive tax.) CLEAR would at least start with 75% revenue return, although as discussed, that fraction would diminish as the cap tightened and the price ceiling was hit. Nevertheless, revenue return via a “dividend” or “green check” offers transparency and accountability that could help build political support for carbon emissions pricing.

On the other hand, returning revenue via reduced taxes on workers, as Rep. Larson proposes, would also avoid regressivity while offering the additional advantage of employment stimulus. This kind of tax-shifting seems to be a key ingredient in the continued political and economic success of the carbon tax in British Columbia and its effectiveness has been widely recognized here, too. Cutting payroll taxes has been praised by the Congressional Budget Office as one of the most cost-effective ways to reduce unemployment. The bipartisan “Hire Now” Act, co-sponsored by Senators Hatch and Schumer, effective in March 2010, eliminated the first six months of payroll taxes on employers that hire the unemployed.

While pro rata “dividends” offer appealing transparency and simplicity, the potential for a “job-creating carbon tax” to cut payroll taxes while de-carbonizing our economy seems no less attractive, particularly with officially-measured unemployment persisting above 10%. Though we conclude that CLEAR bill is too flawed to serve as effective carbon pricing legislation, it did at least jump-start the much-needed debate about revenue return. For that, Senators Cantwell and Collins and CLEAR’s supporters deserve high praise.