From Wesleyan: An Energized Call to Price Carbon

Author’s note, Dec. 22, 2010: Video and Powerpoints of Hansen, McKibben, the Congressmembers, the carbon-pricing “debate” and other sessions are now available at this page of the Pricing Carbon conference Web site.

Forgive us if this post is a bit breathless. We’re still reeling from the energy we experienced at the Pricing Carbon conference this past weekend at Wesleyan University.

Over 500 people participated in the panels, workshops and strategy meetings, which began Friday evening and continued into Sunday afternoon. A majority were students, including 175 members of Students For a Just and Stable Future, a dynamic activist organization that began in Massachusetts and has spread across New England. Non-students were well represented too, with activists, policy professionals and concerned citizens from two dozen states and Canada. Opinion was unanimous — among presenters and participants alike — that the conference was a vital and worthwhile experience. And as of Sunday morning, Wesleyan’s IT staff had counted 33,000 hits to their site streaming conference video.

Here’s a handful of quotes from the Congressmembers:

I’m the proud author of that bill, America’s Energy Security Trust Fund Act, and I will be proud to introduce it again in the next Congress. — Rep. John Larson (D-CT) 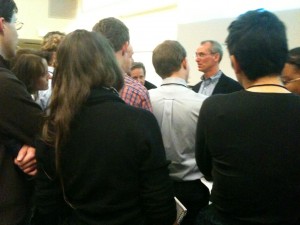 The Republicans have done us a favor — they’ve given us two years to think, two years to build a movement.” — Rep. Bob Filner (D-CA)

I didn’t need to come up here. There are no votes for me here. I came up here and you gave me faith. Now you need to be thinking about how you’re going to get meetings like this in every part of the country. — Rep. Jim McDermott (D-WA)

There was a positive and energetic spirit throughout the conference. One reason for this was the conscious structuring of the conference to maximize opportunities for participation by all of those in attendance; e.g., by limiting the amount of time for speakers in plenaries and workshops, to allow for more time for questions and dialogue.

It was also because the co-sponsoring groups and many of the people who participated believe that the demise of the cap and trade model for comprehensive climate legislation opens up the possibility that a much better approach to pricing carbon and reducing greenhouse gas emissions can now become the preferred national approach. And it was due to the positive combination of a cross-section of older activists, scholars, political leaders and heads of organizations interacting with large numbers of students and youth seriously interested in and passionate about the climate issue.

Click here for the Wesleyan Statement of Carbon Pricing Principles. Come back to this page shortly after Thanksgiving for a sign-on page; links to conference Powerpoint presentations, photos and videos; and, for conference participants, a Google news-group to help us stay connected and strengthen the movement to price carbon emissions efficiently, equitably and transparently.