“Innovation” Solution is as Chimerical as Cap-and-Trade

This quote keeps cropping up like some noxious weed:

“We didn’t tax typewriters to get the computer. We didn’t tax telegraphs to get telephones,” says Michael Shellenberger, president of the Breakthrough Institute in Oakland, Calif.

And, by implication, we don’t need to tax the carbon in fossil fuels to get wind, solar and efficiency.

After Shellenberger fed that line last week to New York Times economics columnist David Leonhardt, it surfaced everywhere from Forbes.com to FireDogLake and the NY League of Conservation Voters. It’s certainly good copy, but is it a basis for policy?

Computers and telephones didn’t replace typewriters and telegraphs by delivering the same services more cheaply. They provided new services that were qualitatively different … and eminently valuable. 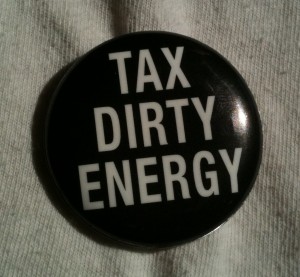 Alas, a vastly different model governs the effort to end carbon pollution. Solar and wind may be green and gorgeous, but they provide the same stuff as fossil fuels: electrons and liquid fuels (or their equivalents). Clean tech won’t scale to the extent needed unless it can make power and energy more cheaply than fossil fuels. And that won’t happen so long as little or no price value is put on the fact that efficiency and renewables are carbon-free whereas fossil fuels are not.

Shellenberger and his Breakthrough Institute appear blissfully untroubled by this. Their 4-part plan, co-authored with fellows at the American Enterprise Institute and the Brookings Institution* and released last week, would:

(*In a letter published in the New York Times on Oct. 20, Brookings president Strobe Talbott wrote that although one of the report authors is a senior fellow at Brookings, “The report … does not represent the institutional view of Brookings.”)

Pardon us, but this is a plan to transition quickly out of fossil fuels? These measures will insulate U.S. houses? Retrofit our offices? Replace inefficient engines and appliances? Incentivize proximity over sprawl and local over big-box? Site and install 400,000 industrial wind turbines (or equivalent photovoltaic farms) to eliminate coal-fired power generation? Curb and reduce car and truck miles driven?

Do Shellenberger et al. grasp the magnitude of the task? Consider coal-burning, which pumps out one-third of U.S. CO2 in the course of making close to 2 trillion kilowatt-hours a year. Replacing each of those kWh’s with wind power would require, conservatively, a subsidy of 3 cents a pop: 2¢/kWh via the current production tax credit that has carved out a niche for wind power, plus an extra 1¢/kWh or more to bridge the price gap in the many regions where coal is dirt-cheap.

Now, the math: 3 cents a kWh x 2 trillion kWh = $60 billion. Extrapolate that to 100% of CO2 and the economy-wide subsidy approaches $200 billion a year. And that figure would have to grow with energy use ─ the Breakthrough plan has no incentives or other mechanisms to rein in the rise in electricity and energy demand that historically has accompanied laissez-faire growth. Where is that subsidy, equivalent to at least $600 per U.S. resident each year, going to come from?

The Breakthrough people doubtless would say that innovation will make wind and solar cheaper than untaxed coal, oil and gas. We question whether a far more ambitious plan than the one released last week could even come close, but we’ll save that rebuttal for a separate post. In the meantime, maybe Shellenberger should examine his historical examples more closely. Computers were never cheaper than typewriters. They conquered business and everything else because they could do more.

Renewables and efficiency don’t do more for energy consumers and producers than cheaper fossil fuels, however. Individuals and business won’t choose these low-carbon alternatives unless and until society attaches a cost to the climate damage inflicted by fossil fuels. If the huge subsidies needed to make low-carbon energy look cheap are unaffordable — as the figures here indicate — the only valuation method is a carbon tax.

“The death of cap and trade doesn’t have to mean the death of climate policy,” Leonhardt wrote in his Times column. “The alternative revolves around much more, and much better organized, financing for clean energy research.” But that alternative is a chimera. No amount of wishing can alter the fact that we can’t overcome the climate crisis without a robust carbon tax.