U.S. climate activists are gleeful at Sen. John Kerry’s demolition of a sometime climate skeptic at a Senate Finance Committee hearing on Tuesday, and justly so. Ken Green, a resident scholar for the corporate-financed American Enterprise Institute, won the respect of carbon tax advocates two years ago, when he co-authored an AEI report that powerfully made the case for a revenue-neutral carbon tax over a cap-and-trade system. But as an invited witness on Climate Change Legislation: Considerations for Future Jobs, Green attempted to argue that Earth’s ecosystems and human civilization could safely accommodate a global temperature rise of 2 degrees Celsius, though he admitted that any larger temperature rises would be dangerous. Kerry skillfully “outed” Green as an amateur in climatology who had published no peer-reviewed studies and could point to none to support his climate blandishments.

The interchange, summarized in a 6½-minute video assembled by Joe Romm at Climate Progress, showcases Sen. Kerry’s skill as a cross-examiner and reveals just how flimsy and muddled the case questioning the climate crisis really is. Lost in the euphoria, however, is evidence of the Senator’s own confusion — not on the need to act to avert climate catastrophe, but on the workings of competing means of pricing carbon emissions. 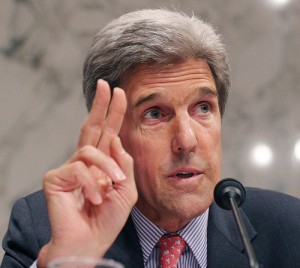 In an earlier part of this week’s hearing, Sen. Kerry repeated a point he made in an August 4 Finance Committee hearing on Climate Change Legislation: Allowance and Revenue Distribution: a carbon tax wouldn’t reduce emissions, Kerry claimed, because polluters would “just pay the tax,” whereas a cap would force them into making the desired reductions.

Of course, as anyone versed in climate economics knows, and as the economist-witnesses explained in August, a carbon price of, say, $20/ton would produce the same emissions reductions whether the price was set by traders in a carbon market or directly via a fee on fossil fuel producers. Under a cap with a $20/ton permit price, emitters would have no greater (and no less) incentive to reduce emissions than they would under a $20/ton tax. Reductions that can be made for up to $20 per ton will be made in either system because they will yield the same savings — as permits that wouldn’t need to be purchased under a cap, or as taxes that wouldn’t have to be paid under a tax. Similarly, reductions costing more than the set price won’t be made because it will be cheaper to “just buy the permits” (to adapt Sen. Kerry’s phrase), or “just pay the tax.”

Under either system, then, emitters retain the flexibility to make reductions when those reductions are cheaper than the carbon price and to pay the allowance cost or tax if that turns out to be cheaper. That flexibility about where, when and how to make reductions is why either a carbon cap or tax is more efficient than source-specific regulations which would force emissions reductions at times and places where they’re more expensive and would miss some reductions that were cheaper.

In the August hearing, Sen. Kerry questioned whether American businesses and households would actually respond to higher fuel and energy prices. In doing so, Sen. Kerry overlooked the vast body of evidence quantifying price-elasticity in virtually every sector of the U.S. economy. He also had evidently forgotten what happened during the summer of 2008 when gasoline hit $4/gallon: traffic congestion eased, carpools, buses and trains filled up, and SUV sales tumbled. And that was only the short-term effect of a price spike; a long-term, predictable carbon emissions price increase would allow sound business planning and create incentives for long-term investment in energy efficiency and low-carbon alternatives.

And that points to a key reason that cap-and-trade is an inferior way to set a price on carbon: the price signal under a cap would be “noisy” due to both volatility and the fact that the price must be “revealed” through the market workings of the cap rather than being stated, explicitly, in the tax code. That noise means that with cap-and-trade it takes a higher price for the economy to “hear it” and respond, even if the general trend is upward.

Sen. Kerry is on solid ground relying on peer-reviewed climate science. But his ongoing misunderstanding of the workings of carbon pricing is almost as shocking as the AEI witness’s misrepresentation this week of climate science. It’s past time for both sides to get it right: The consequences of unmitigated climate change will be grave, whereas clear, simple, predictable carbon pricing is essential to catalyzing the solutions.