Carbon taxing to safeguard Earth’s climate took several major steps forward — politically and intellectually — with the introduction yesterday of the America’s Energy Security Trust Fund Act of 2009 by Rep. John B. Larson, chair of the House Democratic Caucus and fourth-ranking Democrat in the House of Representatives.

The new bill builds and improves on Rep. Larson’s 2007 bill with these provisions: 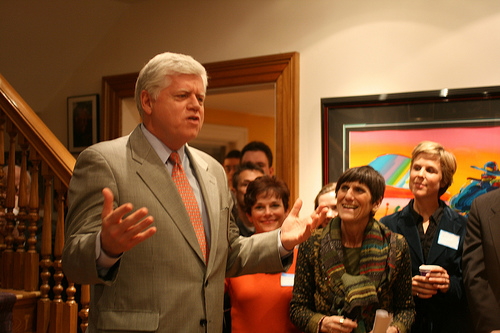 Rep. Larson, a member of the powerful, tax-writing Ways & Means Committee, appears to have crafted his new bill to counter most if not all salient objections to carbon taxing:

The Larson bill isn’t perfect; for one thing, the energy-price protections from the payroll tax-shift will need to be extended to non-working families and individuals. But the automatic upward adjustment in the carbon tax rate, if required to meet certified emission goals, is a big step forward, and should help allay concerns of cap-and-trade adherents over any quantity-uncertainty with a carbon tax.

Equally impressive is the Larson bill’s carbon tax level; with an increment rate of either $10 or $15 a ton per year — implying annual increases of at least 10 cents per gallon of gasoline and ¾ of a cent per kWh for electricity on a national-average basis — producers, consumers and intermediaries will be moved inexorably to lower-carbon investments and choices.

What may make the robust carbon tax level politically feasible, in turn, is that only a small and declining fraction of the revenue is earmarked for new programs. As noted, by the tenth year, 98% of incoming revenue (96% of cumulative) will be recycled to workers and their families. This should be attractive to growth advocates, deficit hawks and advocates for working families.

Prospective losers: profligate emitters, oil barons and sheiks, mountaintop miners, and ideologues who regard as anathema governmental action to correct “the greatest market failure the world has seen.” And, oh yes, cynics who said the U.S. could never enact a meaningful carbon tax.